The name of Nikola Tesla will always be associated with the invention and earlier developments of the induction motor. In fact, at one time this type of apparatus was known almost exclusively as the “Tesla” motor.

Tesla devised this motor back near the beginnings of the electrical business, when practically everything was built by “cut and try” methods, and none of the accurate analytical processes of later days had been developed. It may be said broadly that Tesla knew two fundamental facts — first, that if a magnet were moved across a sheet of conducting metal, it would tend to drag this metal along; and, — second, that the effects of such a moving magnet could be produced by suitably disposed polyphase currents acting on a stationary magnetic structure.

Perhaps others, at that time, also knew these two facts, but if so, apparently they knew them only as two isolated facts. Tesla considered them in combination and the result was the Tesla motor, or what is now known broadly as the “induction motor.” These two facts, in combination, represent a fundamental conception, and all of the many millions of horsepower of induction motors in use today throughout the world, are based upon these two fundamentals.

Naturally, Westinghouse, having fought single handed to advance the alternating current system, was supremely interested in the new type of motor. What if the new motor did require polyphase circuits, while all existing circuits were single phase? What if it did require lower frequency than any existing commercial circuits? These were merely details of the future universal alternating system. The important thing was to obtain an ideally simple type of alternating current motor, which Tesla’s invention offered. Tesla furnished the fundamental idea.

He and his associates, working for Mr. Westinghouse, proved that thoroughly operative induction motors could be built, provided suitable frequencies and phases were available. What matter if they did not produce an operative commercial system at the time? What matter if it needed the powerful analytical engineers of later date to bring the system to a truly practicable stage — men with intimate constructive knowledge of magnetic circuits — men on intimate terms with reactive coefficients and other magnetic attributes totally unknown to Tesla and his coworkers? In time the motor was made commercial, and it has been a tremendous factor in revolutionizing the electrical industry.

Probably no one electrical device has had more high-power analytical and mathematical ability expended upon it than the induction motor. The practical result has been one of the simplest and most effective types of power machinery in use today. Thus Tesla’s fundamental ideas and Westinghouse’s foresight have led to an enormous advance in the world’s development. 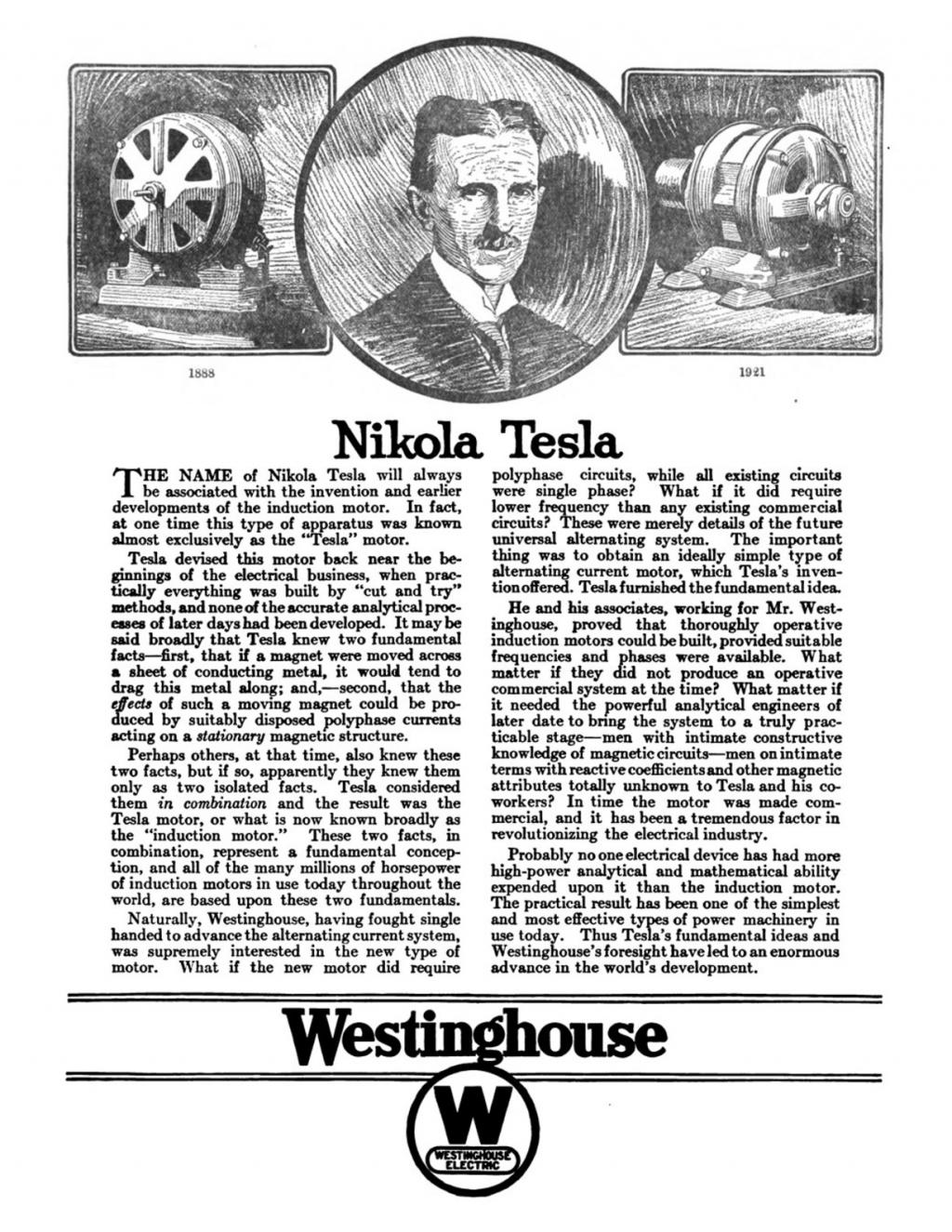