Project Tesla - In Search of an Answer to Our Energy Needs 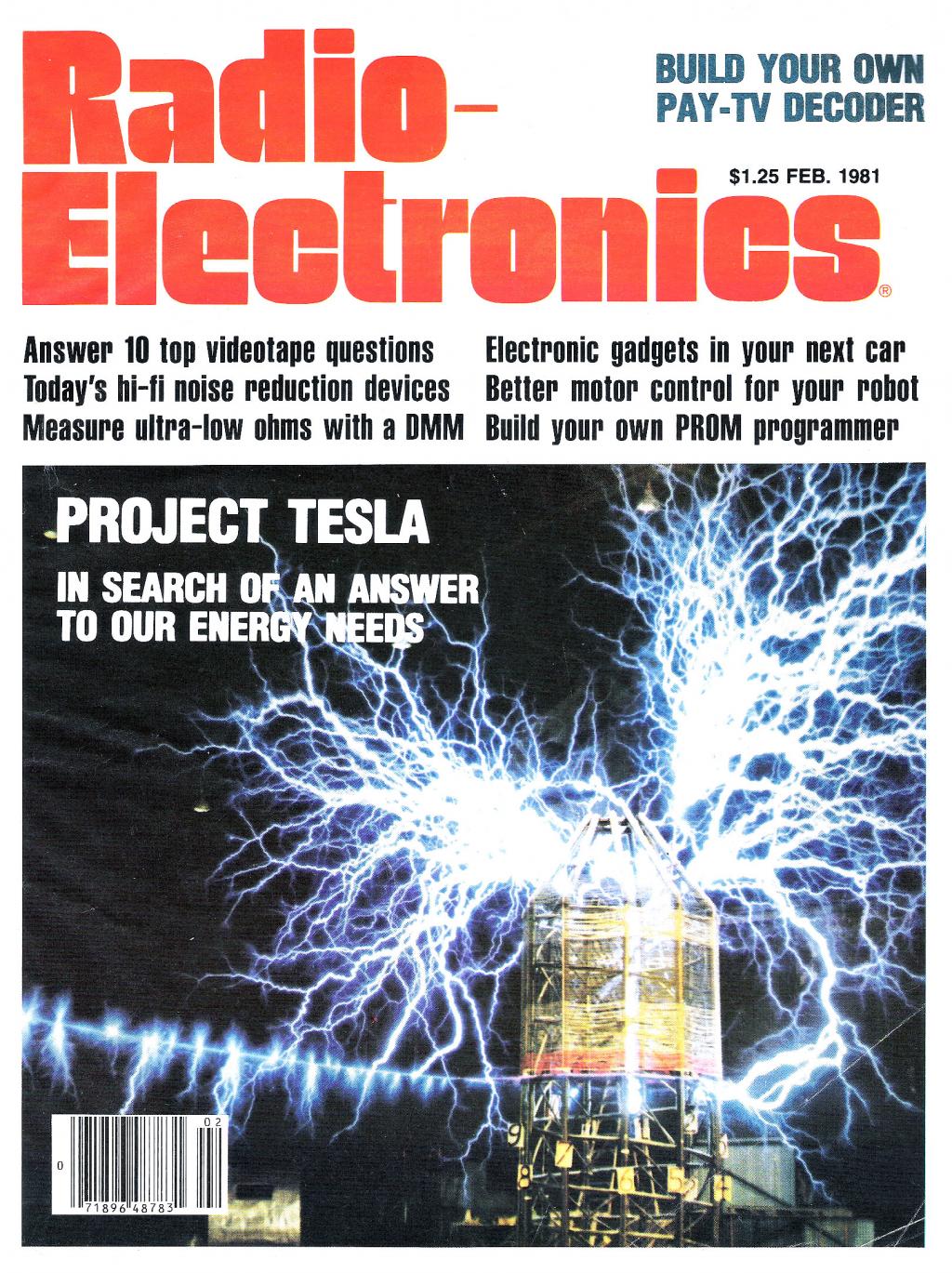 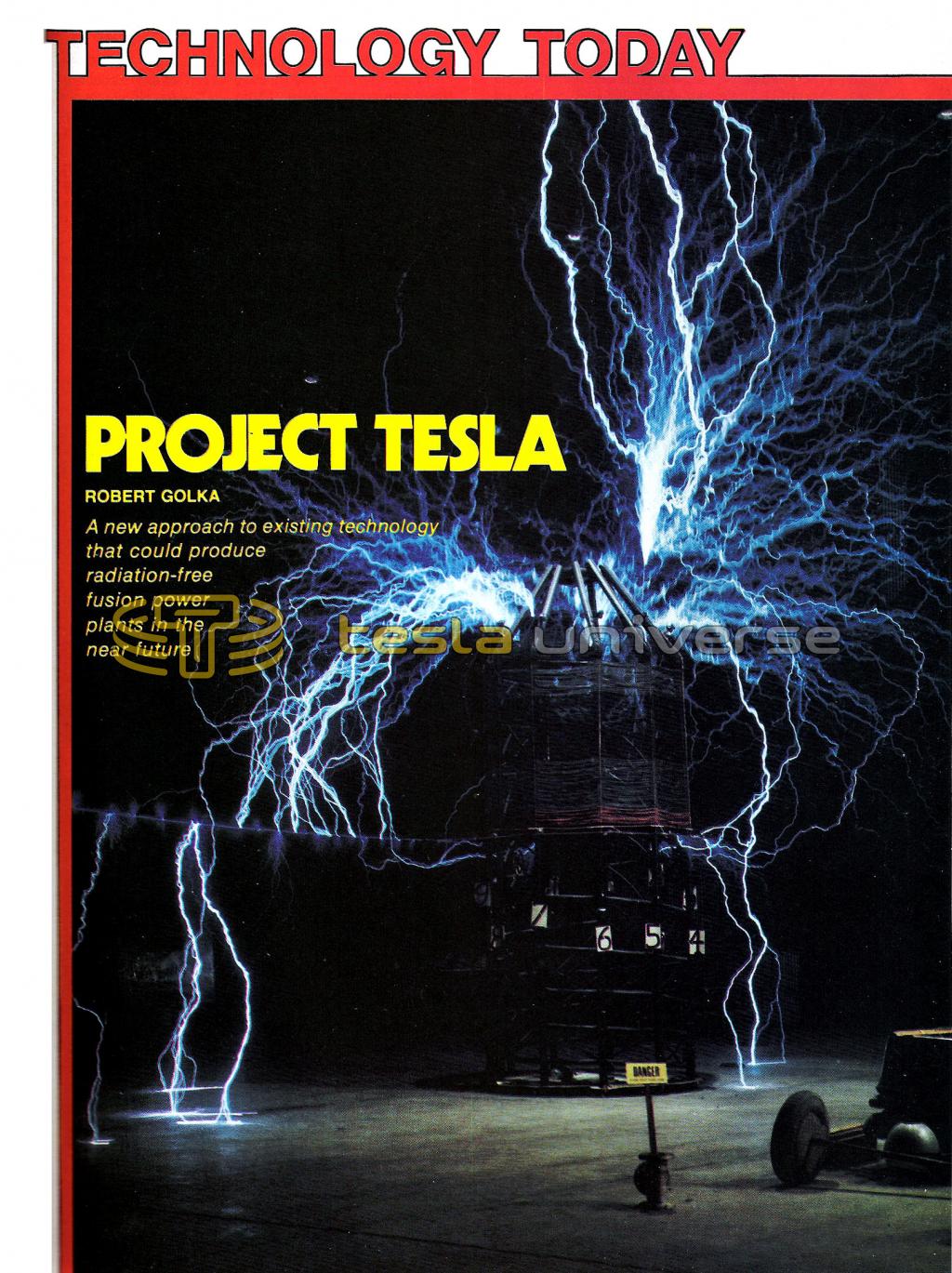 A new approach to existing technology that could produce radiation-free fusion power plants in the near future.

For many years we have looked for a way of holding very hot gases without the use of magnetic fields. About 11 years ago (1968), we here at Project Tesla began looking into some of the research of Nikola Tesla, who in 1899 was experimenting with an international power and communicating system. During his experiments he was repeatedly producing small fireballs that persisted for many seconds after his coil (which at that time was generating 12-million volts) was turned off. He then devoted eight pages of his diary to a crude hydrodynamic theoretical model of the fireballs and said that the investigation of these properties would be worthwhile. After Tesla’s death, his experiments in this field were not repeated.

Then in 1970, I organized Project Tesla and tracked down Tesla’s diary of 1899 to the Nikola Tesla Museum in Beograd, Yugoslavia. From Tesla’s notes I was able to build the closest replica of Tesla’s high voltage machine, recreating the fireballs, and even exceeding the power output of it. From that point, 10 years of research with limited out-of-pocket funding, has emerged a full-blown fireball thermonuclear fusion reactor concept.

The 1978 Nobel Prize winner, Peter Leonidovich Kapitsa, with support of the Soviet government, has developed very similar concepts in Nuclear fusion which he discusses at length in his Nobel prize lecture published in the September 7, 1979 issue of Science. Fusion creates heat by pushing hydrogen-deuterium atoms together. This is completely opposite to the method used in fission reactors that generate heat by splitting heavy atoms apart. Aside from which this process is potentially very messy to our environment. The problem is simply that some of the nuclear fragments are unstable and thus radioactive for periods of time that range from days to hundreds of thousands of years, depending on which radioactive elements we are talking about. In the “Fireball Fusion Reactor” only Helium is created and this is not a radioactive substance. Mathematical models of the fireball fusion process, indicate it can achieve and hold temperatures over a billion degrees, more than enough for the fusion process to take hold and be sustained.

The fireball fusion reactor works by focusing a carbon dioxide laser beam down to a tiny pin point in a spherical tank filled with hydrogen-deuterium. The high concentration of light energy heats the gases so fast that an explosion occurs, just as sunlight through a magnifying glass will ignite a piece of paper because the magnifying glass concentrates the sun’s light which produces heat. This makes a small firecracker-size explosion.

This explosion is designed to occur at the focal points of four other far-infrared tetrahedrally spaced lasers. These lasers are chosen to be of a particular color of light (wave length) so that the plasma (hot gases) in the explosion resonates and absorbs energy from the laser light. As this happens the plasma explosion becomes stable and forms a fireball, because light energy (photons) is being put in and absorbed in an orderly and slow manner. This is a very much different method than that of inertia pellet laser fusion now being experimented with at Lawrence Livermore Laboratories in California. That process involves ganging up yet to be developed costly giant lasers to develop a tremendous pulse of light energy that is slammed into a tiny pellet in a trillionth of a second to make an implosion which produces heat because of the extreme rapid compression of the vaporized pellet. Thus the plasma fireball heats up and expands gradually which is unwanted. This expansion is reversed by gradually increasing the deuterium gas pressure in the spherical tank causing the fireball to remain the same size and density and to reach a billion and a half degrees in 30 minutes.

Once a billion and a half degrees have been reached, the fusion process starts and the laser can be extinguished. Each pair of hydrogen-deuterium atoms that fuse together make a helium atom and shoot off 2 neutron particles at high speeds. These neutron particles have no electrical charge at all, therefore, they travel effortlessly through the onion-like layers of positive ions and negative electrons of the fireball.

The spherical tank is equipped with an inside water jacket. Where the high speed neutrons reach the water, they are slowed down and convert a little of the water to deuterium. (They also heat the water just as a brake on an automobile heats the wheel cylinders.) The heat can make the water turn to steam and the steam can be used to turn a turbine-driven generator to produce electric power. It can also be used to break down water into hydrogen to supply hydrogen-powered automobiles.

We mention hydrogen powered automobiles, only because the offshots of this technology are many. In comparison to current time scales of Fusion Development, the “Fireball Fusion Reactor Prototype” could be built with proper funding in two to five years. bringing it well ahead of other fusion research. 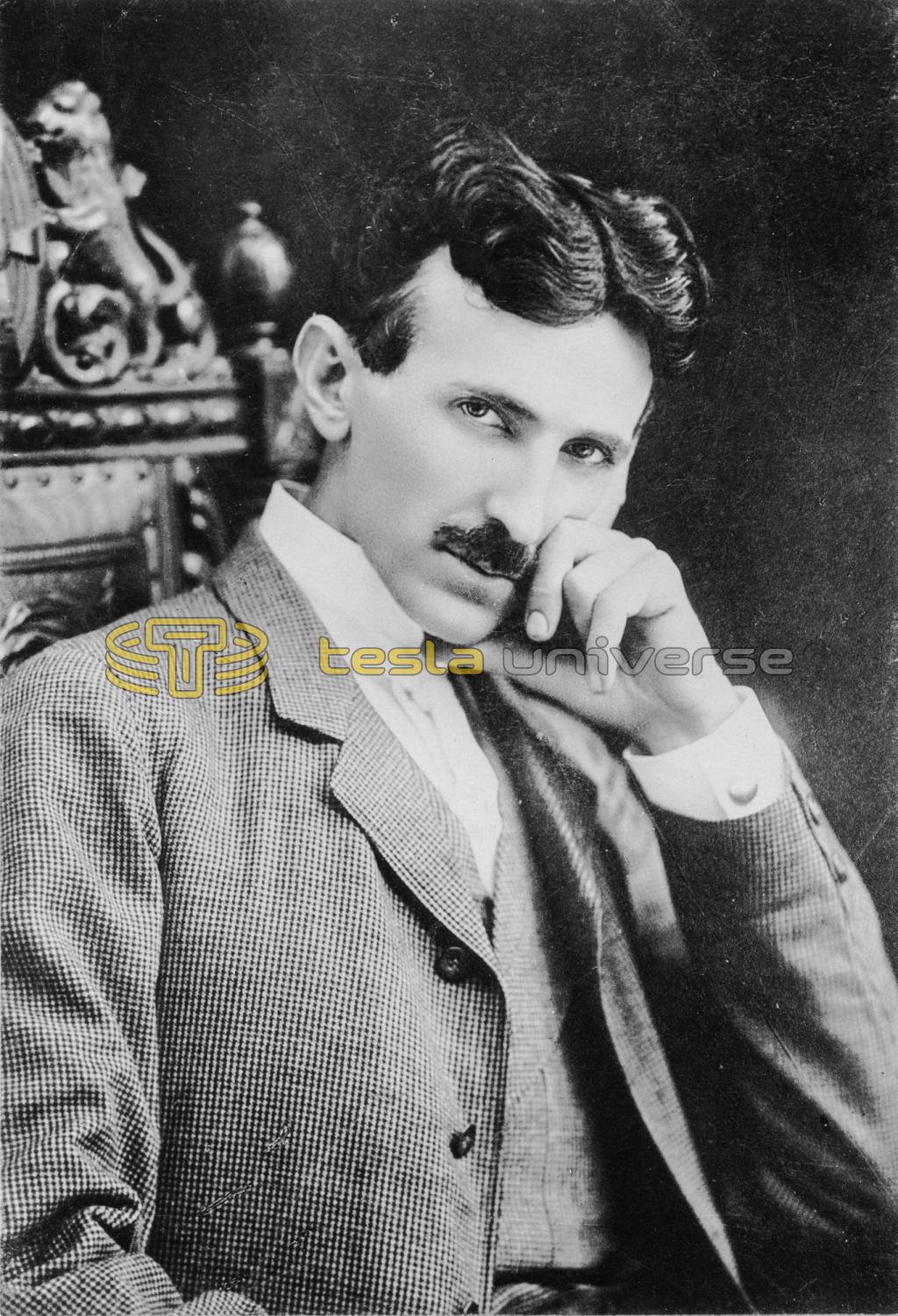 Nikola Tesla, enigmatic inventor and holder of numerous patents on electric devices including the AC electric motor, and the tuned circuit used in all radio and television sets, designed and built the largest high-voltage device (12.5 million volts!) ever constructed. The year was 1899. The place, Colorado Springs, USA. His purpose was to send electric power and communications around the world, three years before Marconi demonstrated radio transmission by sending the code pulses for the letter “S” across the Atlantic Ocean In 1902.Tesla’s experiment lasted nine months and cost $200,000 (in 1899 dollars), kindly supplied by J. Pierpoint Morgan and others. During these experiments he noted in his diary the accidental but repeatable production of little “fireballs,” about 1½ inches in diameter, that persisted for many seconds after his device was turned off. He then devoted eight pages of his diary to a crude hydrodynamic theoretical model of the fireballs and said that investigation their properties would be worthwhile. For the next 70 years his experiments were never repeated nor verified.In 1968, Robert K. Golka became interested in Tesla’s fireballs since they represented a confined plasma, something that may be useful for controlled thermonuclear fusion research. Natural ball lightning was similar in many respects. Could the key to both,phenomena be found by duplicating Tesla’s experiments? Mr. Golka decided to find out. In 1970 he finally tracked down the Colorado Springs Tesla Diary of 1899 in the Nikola Tesla Museum in Beograd, Yugoslavia. Mr. Golka built the present apparatus at the Wendover Air Force Base in Utah, the closest replica of Tesla’s high-voltage machine since the original. Since then the machine has been modified many times, always in an attempt to get closer to the original to verify the little fireballs of confined, hot plasma reported by Tesla (see Radio-Electronics, June 1976 issue).

The past 10 years of work has lead to a $4-million plasma fusion device that has recently been presented to the Department of Energy for funding. Instead of making the fireball by a lightning discharge, the proposed device uses five high-power CO2 lasers that are focused inside a 1-foot diameter spherical tank under high pressure. If this device is successful it may completely change present attempts to thermonuclear fusion, in that confining magnetic fields will no longer be necessary to confine a plasma in a donut-shaped device, such as the Tokamak. Instead, the plasma will be in the form of a sphere, held together by an electron-ion layer effect that is analogous in some respects to the surface tension in a water droplet.

In this case there are alternating concentric spherical layers of trapped particles of alternating signs, a phenomenon first envisaged by the late inventor of electronic TV, Philo Farnsworth, who called the layers “virtual anodes” and “virtual cathodes.” It is believed by Golka that a 1971 experiment by Bekefi at MIT may have demonstrated the Farnsworth effect as arising spontaneously at the boundary of a hot plasma immersed within a cold gas. 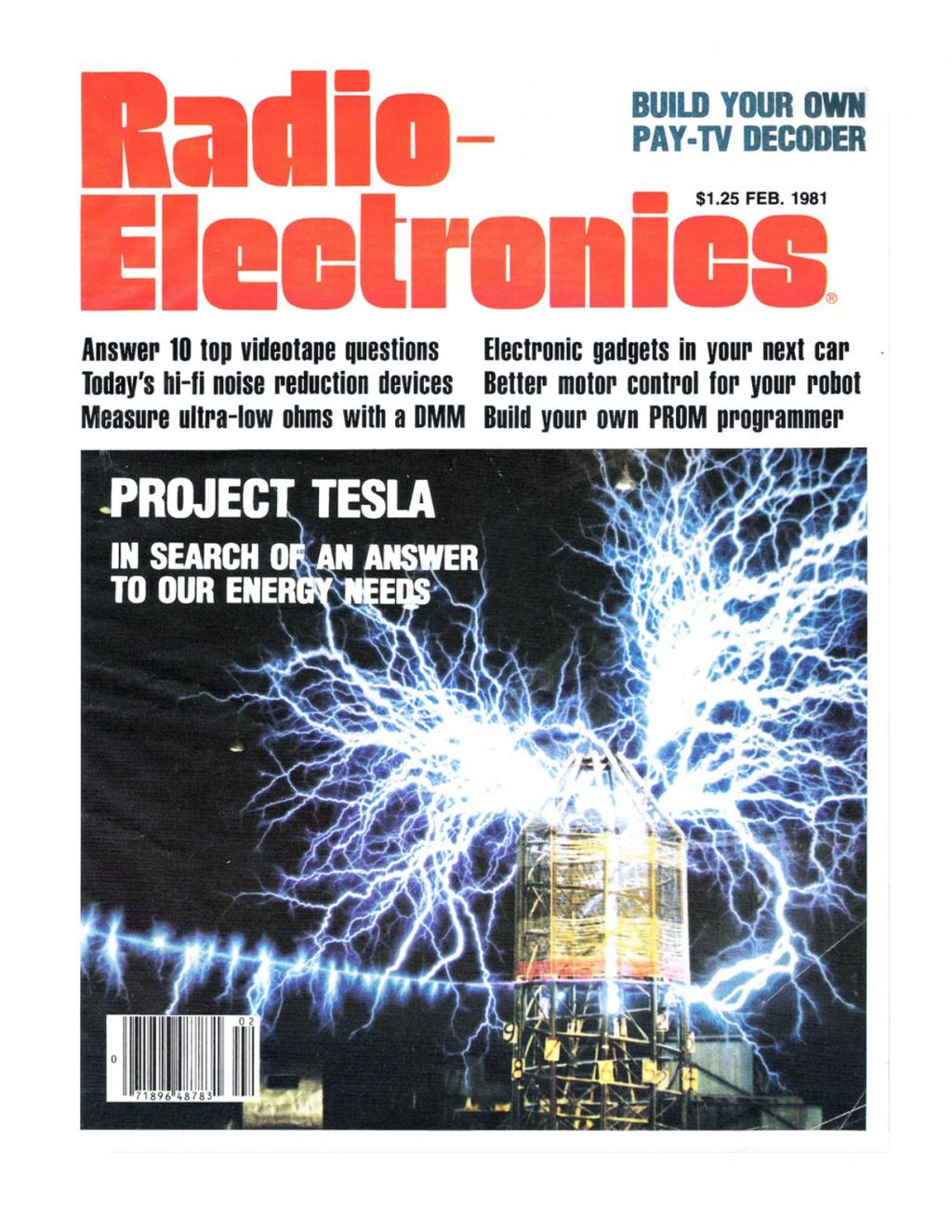