Nikola Tesla and Women - The Only Love of a Great Scientist 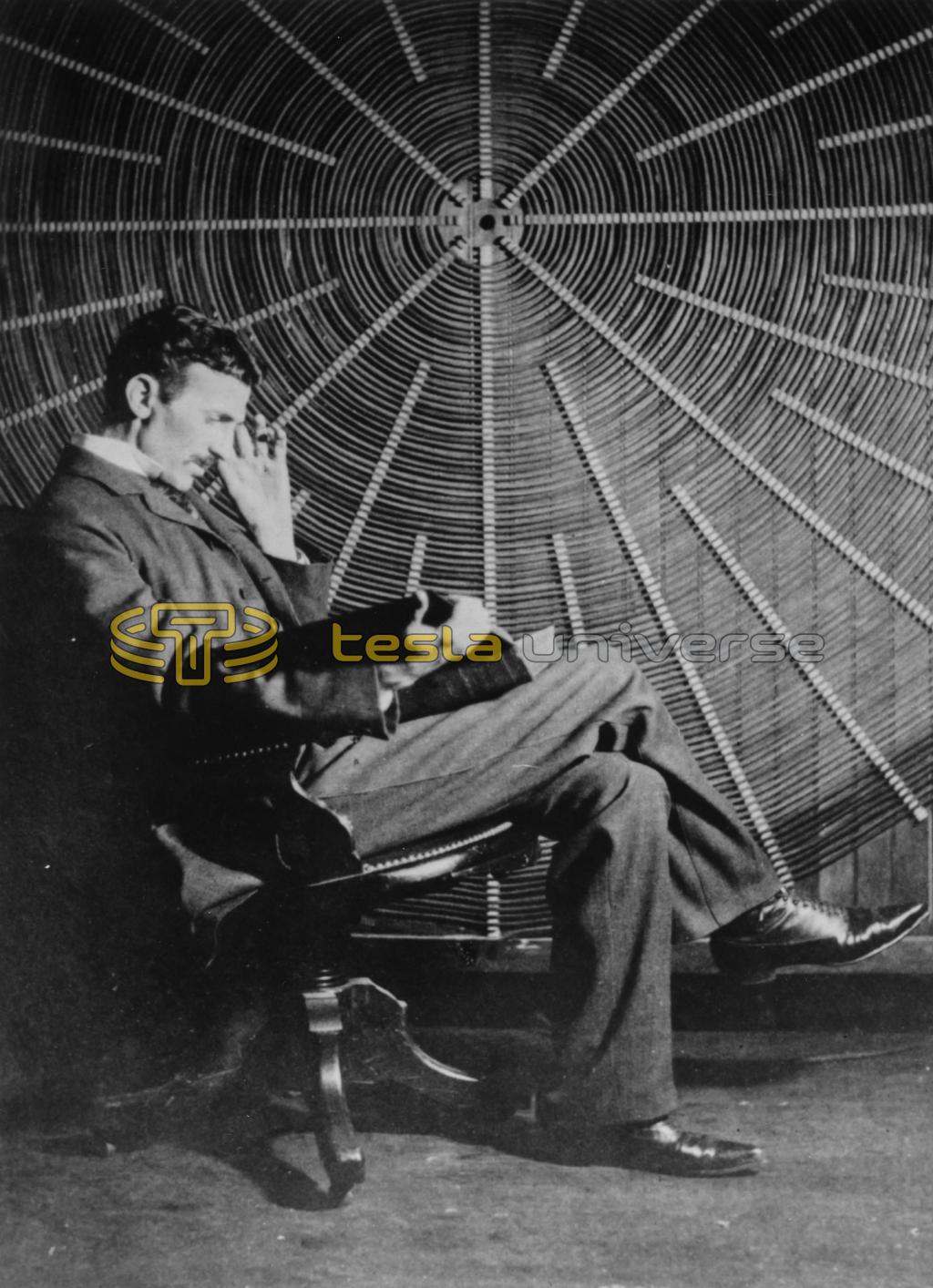 No women, with the exception of his mother and his sisters, had a part in the life of Nikola Tesla. He idolized his mother and admired his sisters for their intellectual accomplishments. He attributed many creative skills to his mother and always highlighted her artistry to invent many useful household gadgets. He often regretted she had not been born in such an environment in which she could have expressed her various creative talents. He was aware of the values a woman could bring into a man’s life, as he always had in mind how much his mother had contributed to happiness and welfare of his father and how much he had inherited of that talent.

As a young man, Tesla was very attractive. He was very tall and slender, and although he was no Adonis, his other features made up for his “shortage” - 2 meters height. Fair, spiritualized, calm, almost shy; he was well educated, soft-spoken; he dressed well even when he didn’t have enough funds for expensive clothes. His blue-green eyes attracted girls. However, throughout all his life Tesla was avoiding romantic encounters and anything that would lead into romance as thoroughly as other people sought for it.

He dedicated all his life to scientific work and he couldn’t let his thoughts “wander” into romantic fantasies. Still, he did not become a misogynist. Instead, he idealized women, and half a century ago he plainly brought forth his opinion of the opposite sex:

“This struggle of the human female toward sex equality will end in a new sex order, with the female as superior. The modern woman, who anticipates in merely superficial phenomena the advancement of her sex, is but a surface symptom of something deeper and more potent fermenting in the bosom of the race. It is not in the shallow physical imitation of men that women will assert first their equality and later their superiority, but in the awakening of the intellect of women. But the female mind has demonstrated a capacity for all the mental acquirements and achievements of men, and as generations ensue that capacity will be expanded; the average woman will be as well educated as the average man, and then better educated, for the dormant faculties of her brain will be stimulated to an activity that will be all the more intense and powerful because of centuries of repose. Women will ignore precedent and startle civilization with their progress.”

A Meeting with Sarah Bernhardt

When Tesla achieved world glory he could not avoid popularity among women but he did not attribute much importance to it. On one occasion, while he was sitting in front of a Paris café with his fellow scientists, a lovely woman came across. She was wonderfully dressed and with a nicely combed red hair. Tesla immediately recognized Sarah Bernhardt, the famous French actress. The Divine Sarah passed by close to their table and, when she was a step or two away, she dropped her handkerchief. Tesla quickly stood up, grabbed the handkerchief, and, holding a hat in the other hand, he bowed low. He handed back the handkerchief to the beautiful tragedienne, saying:

Without even glancing at her lovely smiling face he turned around, went back to his chair, and continued his conversation about a problem that bothered him at that time: a world wireless system of power transmission.

Science above all! That’s why Tesla never got married.

“I have decided to dedicate my whole life to work – he wrote – and for that reason I gave up love and companionship of a good woman; and even more than that. I believe that a writer or a musician or an artist should marry. They gain inspiration that leads to finer achievement. But an inventor has so intense a nature, with so much in it of wild, passionate quality that, in giving himself to a woman, he would give up everything, and so take everything from his chosen field. It is a pity, too; sometimes we feel so lonely!”

Why Do You Not Wear Diamonds?

He appreciated the work of many famous American women who showed a sincere interest in his success and who tried to make his life more pleasant. He spoke with excitement of our great actress Milka Trnina, the first spouse of his friend Clarence McKay, Mrs. Jordan L. Mott, and of the beauty of Lady Ribblesdale. He admired the idealism of Miss Anne Morgan, but all that was never interweaved with a thread of romance. He was impressed by the tall, graceful and charming Miss Marguerite Merington, a talented pianist and writer on musical subjects, who was a frequent guest at a house which Tesla often visited.

- Why do you not wear diamonds and jewelry like other women? – Tesla undiplomatically asked the artist one evening.

- It is not a matter of choice with me – she replied – but even if I had enough money to load myself with diamonds I could think of better ways of spending it.

This rationality of a woman thrilled Tesla.

- What would you do with money if you had it? – he continued.

- I would purchase a house in the downtown because I don’t like commuting to the suburbs.

Don’t be a Slave of Fashion

Tesla had a distinct opinion of how women should dress and look. He disliked burly, slow women, but particularly detested modish, flashily dressed and heavily jeweled type. He liked trim, slim, graceful and agile women.

One of his secretaries, well - proportioned and a graceful blonde came to the office on a summer day in a dress that was in the latest style, with a pretty print. The prevailing style called for an extremely low waistline, much below its natural location. This gave a relatively short skirt and from the neck to the hips the dress was almost a plain cylinder. The style was very new and enjoyed popularity for some time. The secretary was an excellent seamstress, so she had made the dress herself and was very proud of it. Tesla summoned the secretary and when she entered his office, hoping that he would say something nice about her new dress, he said:

- Miss, what is that you are wearing? You cannot wear that to where I wish you to go, to a respectable banker. What would he think if someone from my office should come to him wearing that? How can you be such a slave to fashion? Whatever the fashion designers say is the style you buy and wear! Miss, you are a smart girl, you have good taste, so why did you let the saleslady force a dress like this on you? If you were skilled like my sister who sews her own clothing, you would not be wearing that sack, but you could make your own, decent clothes. You should always follow nature when it is about clothes. Do not let a style designer deform your beautiful body and appearance. Take a car, so not many people will see you, go to your home and get dressed sensibly and return as soon as possible so you can take this letter.

He never addressed any of his woman employees by their name or surname, only by “Miss”. When a young woman on his office staff left the job to get married, Tesla preached this sermonette to the remaining members:

- Mses., be careful, do not marry too young because then men marry you mostly for your beauty.

Only the most sensible women could approach within friendship distance to Tesla, and such individuals were idealized by him. He would barely meet others. Many of them would not stop bothering him. From his rich legacy, which is preserved in the Museum of Nikola Tesla, only recently his personal letters were opened. He was receiving unusual expressions of love from many women.

Katherine Johnson wrote him from Italy:

“What are you doing? I wish I could have news of you my ever dear and ever silent friend, be it good or bad. But if you will not send me a line, then send me a thought and it will be received by a finely attuned instrument. I don’t know why I am so sad: I feel as if everything in life had slipped from me. Perhaps I am too much alone and only need companionship. I think I would be happier if I knew something about you. You, who are unconscious of everything but your work and who have no human needs. This is not what I want to say and so I am Faithfully yours, KJ.”

“P. S. Do you remember the gold dollar that passed between you and Robert? I am wearing it this summer as a talisman for all of us. Come, for a moment at least. I haven’t seen you in centuries, although I’m always on your trajectory...”

In another letter she wrote: “I stayed at home last Saturday and Sunday waiting for you to come… I am tired of waiting for your reply… How strange it is that we cannot do without you.”

Of course, there was no reply to many women’s letters. Tesla did not have time to read them. They were opened just recently, after seventy, eighty or more years. Some of them are still keeping secrets of unknown nature because there is no one to open them and study them.

“Every man credits humanity by leaving his progeny to it” – Tesla spoke – “My children are my inventions… My only wish is to convey a message through them to future centuries… A woman is a magnificent being of which I am not worthy.”

Tesla’s only love, inseparable and sincere, was – science. 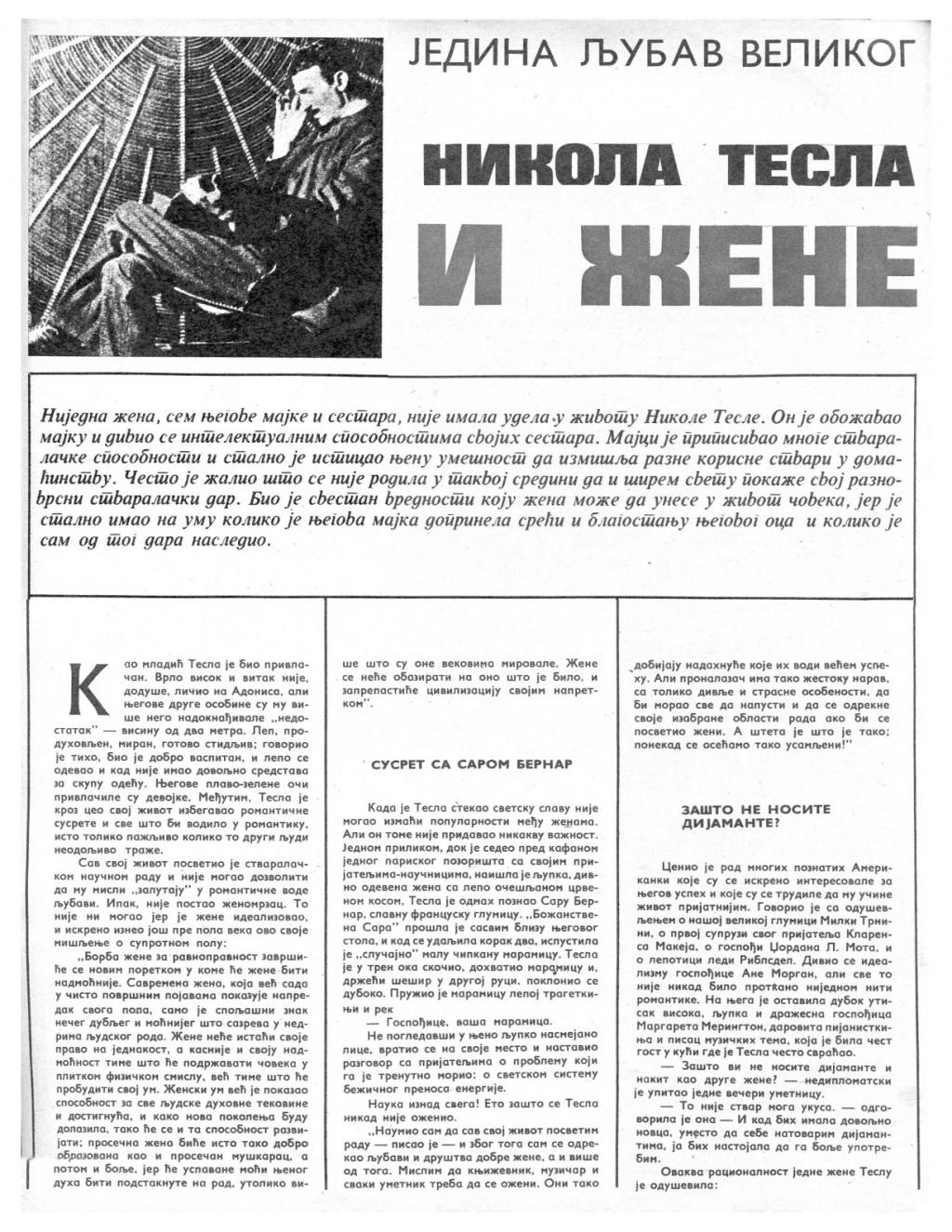