Proposing the 'Death Ray' for Defense

“The beam would melt enemy airplane motors before they approached our coasts and blow up hostile bombers.”

The man was old, but the fervor in his eyes was ageless. Deep-set, they looked out beneath the bushes of his brows.

Thus, just the other day, spoke the man who years ago helped to harness Niagara Falls, through his discovery of the principle of the rotary magnetic field. The man who is known as the father of modern methods of generating and distributing electrical energy. Who in 1904 predicted that the human voice one day would girdle the globe, and whose famed Tesla coil helped to make that prediction of radio come true.

Today, at 83, Nikola Tesla lives in a New York hotel and dreams of making America one vast, impregnable fortress. He says that he can do this.

Tesla is used to skeptics who, he says, laughed at him back in the old days when he worked at Orange, New Jersey, with Thomas A. Edison. Tesla helped Edison design motors and generators. Then of course there was a great deal of laughing in 1904 over Tesla's idea that the human voice would one day wing around the world.

Today, trembling with excitement, this slim old man tells how his newest invention (he holds 700 patents) can melt airplane motors at a distance of 250 miles away from the American coastline, so that invading aviators would drop into the sea.

Today, trembling with excitement, this slim old man tells how his newest invention (he holds 700 patents) can melt airplane motors at a distance of 250 miles away from the American coastline, so that invading aviators would drop into the sea.

For years Tesla worked on the problem of transmitting electrical power from a distance, without bringing this dream out of the laboratory into the workaday world. But he was not alone in his belief that it eventually will be done. The great Marconi, shortly before his death, predicted that the day would come when power would be directed through the air with little loss. And like Tesla, Marconi was reported to have been working on a war-ray. His, it was said, would when perfected be able to stop airplane and other motors many miles before invading forces could reach their goals.

Marconi said little about his mysterious ray, nor will Tesla discuss the details of his. It is his secret and he will not reveal it, he says, except to the United States Government, for he is afraid that it might be stolen by enemies of America, within and without. But of what it will do, he speaks freely.

“This new type of force,” he said the other day, “would operate through a beam one one-hundred-millionth of a centimeter in diameter. It could be generated from a special plant that would cost no more than two million dollars and would take only about three months to construct.

“A dozen such plants, located at strategic points along the coast, would be enough to defend this country against all possible aerial attack. This beam would melt any engine, whether Diesel or gasoline-driven.” (Marconi’s partly - perfected beam was said to be ineffective against Diesel engines). “It would also ignite any explosives aboard any bomber. No possible defense against it could be devised, as the beam would be all-penetrating.”

Four recent inventions, Tesla says, are used in the generation of the ray. Two of them already have been tested, it is said. One of these is an apparatus for producing rays “and other manifestations of energy. in free air, instead of in a vacuum.

The second is a process for producing “A very great electrical force..” Next is a method for amplifying this force and finally there is a new method for producing “A tremendous electrical repelling force..” This, Tesla declares, would be the projector, or gun, of the teleforce system. It would operate on a potential of 50,000,000 volts.

Dramatically, Tesla describes how this titanic voltage would hurl into space billions of microscopic electrical particles of matter that would bring down invading airplanes as insects are dropped by a spray gun.

All this, Tesla says, he is offering to the United States, the land which welcomed him as an immigrant boy from Austria-Hungary in 1884. But there must be no “red tape,” if he is to go to work setting up the first power plant. There must be no “interference from experts.”

Offers like this have been made before, and tests have proved many so-called “death rays” useless. But some authorities, remembering the great achievements of Nikola Tesla, believe his claims should be investigated. Why, they ask, should such a ray be considered impossible in a world where radio is a commonplace? They recall the case of Henry Fleur, who was prosecuted in San Francisco by disgruntled investors who claimed he had bamboozled them with a death-ray machine intended to kill insects.

In the courtroom, Fleur turned his machine on a couple of termites. They died in seconds. A lizard and a snake also were killed by the ray, though it look longer. Fleur was released. He said that he never would experiment with his apparatus to make it a man-killer.

Then there is Dr. Antonio Longoria, who says that he destroyed a death ray machine which he invented in 1933, because it was too dangerous. Of this machine, Albert Burns, president of the Inventors’ Congress in 1934, said that he had seen it kill pigeons, rabbits, dogs and cats at considerable distances. Now Dr. Longoria said that he is willing to re-assemble his apparatus in the event that the United States is subjected to an unwarranted attack. He claims that it worked by changing the red corpuscles of its victims’ blood to white. And he says that it might be adapted to stall the motors of airplane engines in flight.

If such things are possible, some authorities ask: why not give Nikola Tesla the chance he asks to try out his defensive death ray? True, he has been called the greatest dreamer among the inventors who created the present electrical era. But many of his dreams came true. Perhaps, they say, this one might come true, too - and build a wall mightier than any in the world around America’s borders. 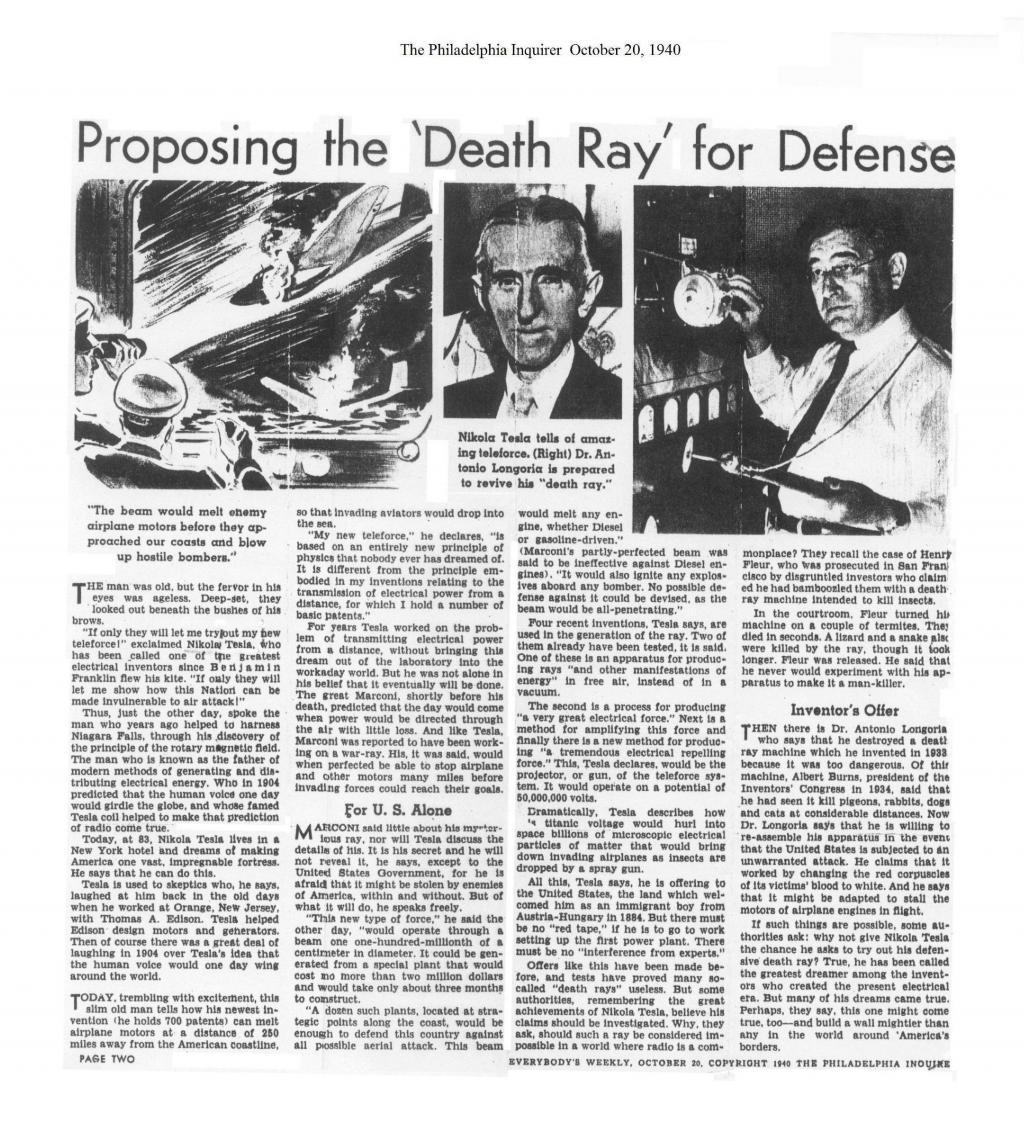