Nikola Tesla, The Electrician Who Thinks We May Yet Talk With Mars

In these days, when the persistence and ingenuity of scientists and inventors have made possible so many alleged impossibilities and brought into the realm of reality so many things that once existed only as dreams, one may be pardoned for a large degree of credulity as to further claims in the direction of marvelous and seemingly impossible achievements. With flying-machines promised in the immediate future, telephone communication with Europe, and electric messages without wires to every part of the world, who shall dare to affirm that a way may not yet be found whereby the inhabitants of this planet may exchange greetings with their fellow-beings who people the stars and other worlds beyond? To be sure, the distances to these various celestial bodies are measured by millions of miles, with no air to speak of between, and the astronomers have not yet declared with certainty that any of them are habitable, as that term is understood in this part of the universe. Despite these little difficulties, however, Nikola Tesla, the eminent electrician, has gone on record recently as saying: “I am confident that the inhabitants of Mars are trying to signal to this earth.” Tesla bases his confidence on recent observations which he has made from a station on one of the highest peaks of the Rockies. He has been conducting experiments at this point for some time past with wireless telegraphy and other electric devices. His studies have led him into astronomical researches also, and it was while engaged in this direction that he noted some strange disturbances on the surface of the planet Mars — wonderful flashes of light which had the appearance of signal-fires. Other scientists and astronomers generally are inclined to scout the idea of communicating with Mars, and some of them do not hesitate to affirm that Tesla’s predictions in this direction are absolutely ridiculous. It is not to be forgotten, however, that Tesla has actually made some remarkable discoveries in electrical science, and the world is indebted to him for valuable inventions. Since the announcement about the signals from Mars, it has been given out that Tesla has discovered a new law in electricity, by reason of which, it is asserted, a large part of technical literature will have to be re-written. He has found that the capacity of electrical conductors is variable and not constant, as has always been supposed. If this discovery is verified it will lead to very important modifications in the methods employed by meteorologists and astronomers in making their observations. 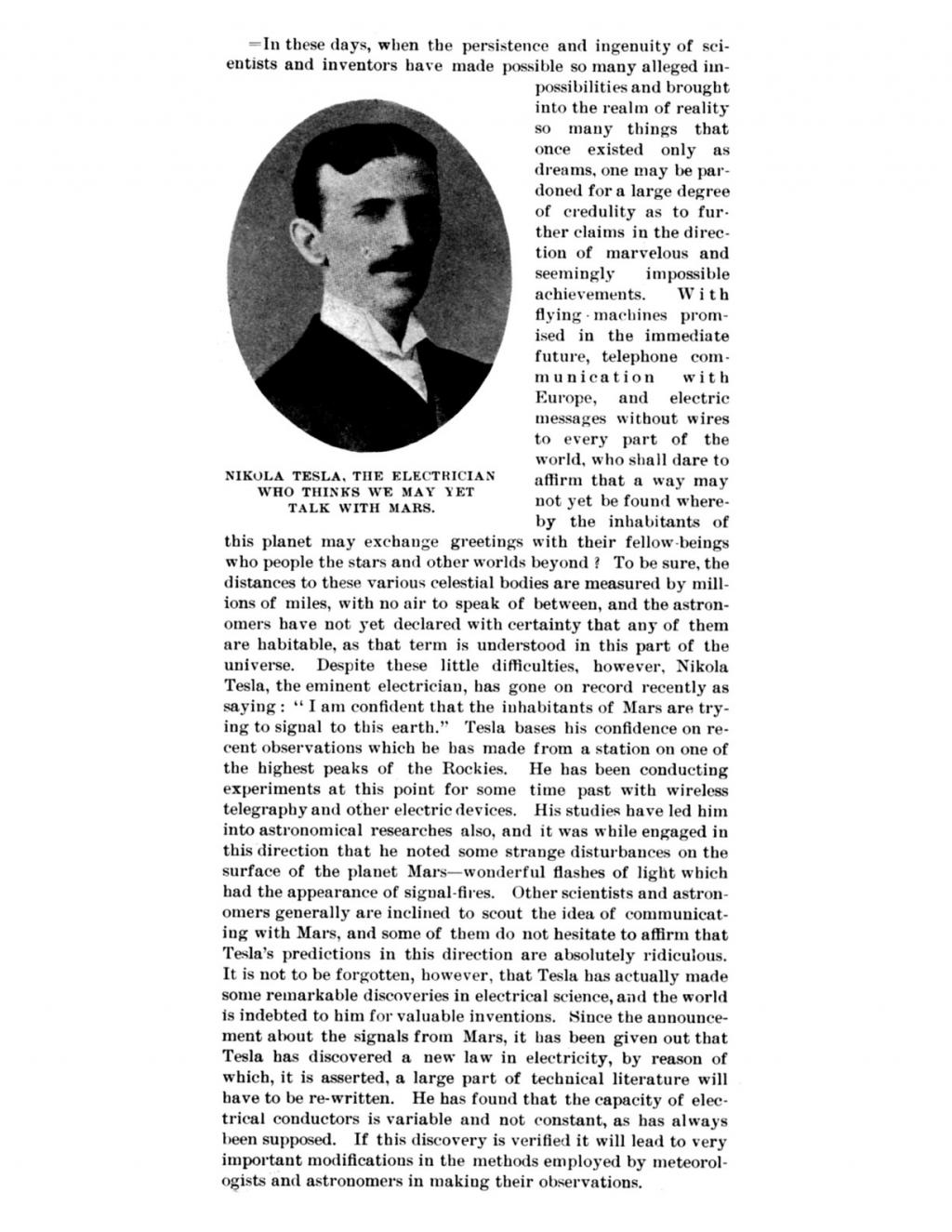