Tesla has seemed to be under a cloud of late, but in the Philadelphia North American he is brought out once more, with his characteristics as a man, by Julian Hawthorne:

Tesla, the papers say, has left his eyrie on the flank of Pike’s Peak in Colorado, and is on his way East with a new wireless telegraphy invention in his pocket. It is hard to realize how much the contents of this man’s mind may mean for the world. I met him a few years ago in a famous but now obsolete cafe, near Madison Square, in New York, and we dined together there. I saw a tall, slender young man, with long arms and fingers, whose rather languid movements veiled extraordinary muscular power. His face was oval, broad at the temples and strong at the lips and chin; with long eyes, whose lids were seldom fully lifted, as if he were in a waking dream, seeing visions which were not revealed to the generality. He had a slow smile, as if awakening to actualities, and finding a humorous quality in them. Withal, he manifested a courtesy and amiability which were almost feminine, and beneath all were the simplicity and integrity of a child.

Tesla is, I believe, a Herzegovinian. The Greek type prevails in him. He has abundant wavy brown hair, blue eyes and a fair skin. He was a trifle shy at first; or perhaps it was merely that he did not at once arrive from the regions in which his mind is wont to reside, and adjust himself to the requirements of his actual environment. But his social instincts were of the royal order; as the host of the occasion, he wished that his guest should be entertained as became the hospitality of princes. There was a reminiscence of the Oriental about it; and if the scene had been a tent in the desert, one would soon have imagined it a palace. But oh, how far it was from the oppressiveness which renders some of the best-intended courtesies a burden!

To be with Tesla is to enter a domain of freedom even more free than solitude, because the horizon enlarges so. His mind cast out genial rays that illuminated distances, and made the great and marvelous seem near and beautifully familiar. You have felt the power of good music to make you seem more than yourself; and similar was the influence of this ingenuous but profound student. My own deficiency in the technicalities of science seemed to offer no impediment to our intercourse; partly because, like other men of really sound attainments, he was easily able to make intelligible to my untrained comprehension the spiritual essence of his own speculations and discoveries; and partly because he turned out to be quite as much at home in my own little specialties as I was.

He knew all English poetry, much of it by heart; nor was he less familiar with the literature of Germany and France, not to speak of more recondite branches of literary culture in which I was not proficient. He knew the art of ancient and modern times, and had thoughts on the subject that were not merely critical, but creative. With music he stood on the terms of a musician; and one can imagine the kind of transcendental symphony that a mind of his calibre and sympathies might compose. Meanwhile, he was one of the first, if not the foremost, scientific investigators of his epoch, which is the most scientific in human history; and when it was question of the vintage of a wine, or the condition and cooking of an ortolan, he knew that, too, though his own eating and drinking were of the most abstemious order.

The total impression which I derived from his manifestations was not, however, of an intelligence divided off into chambers, from one or another of which the treasures were brought forth as needed; but it seemed to be always the same entire and perfect chrysolite of intellectual ability, directed this way or that, focused far or near, as occasion served. Naturally it was toward the possibilities of the future in the way of ascertaining and controlling natural laws that I was most solicitous to direct the conversation. Tesla is the most modest of men, but also one of the most generously communicative when his confidence is secured; and I drew from him the wonderful story of his early experiences, his student days in a great European university — which I will not repeat here, not being authorized to do so.

Then he went on to outline the nature and expected outcome of some of his dealings with electricity and other obscure forces of nature. As he spoke, mankind seemed to arise a Titan, and grasp the secrets of the skies. I saw a coming time when the race would no longer be forced to labor for the means of livelihood, when the terms rich and poor would no longer mean difference of material condition, but of spiritual capacity and ambition; a time when intercommunication all over the earth should be immediate and universal, and even when knowledge should be derived from sources now hardly imagined. 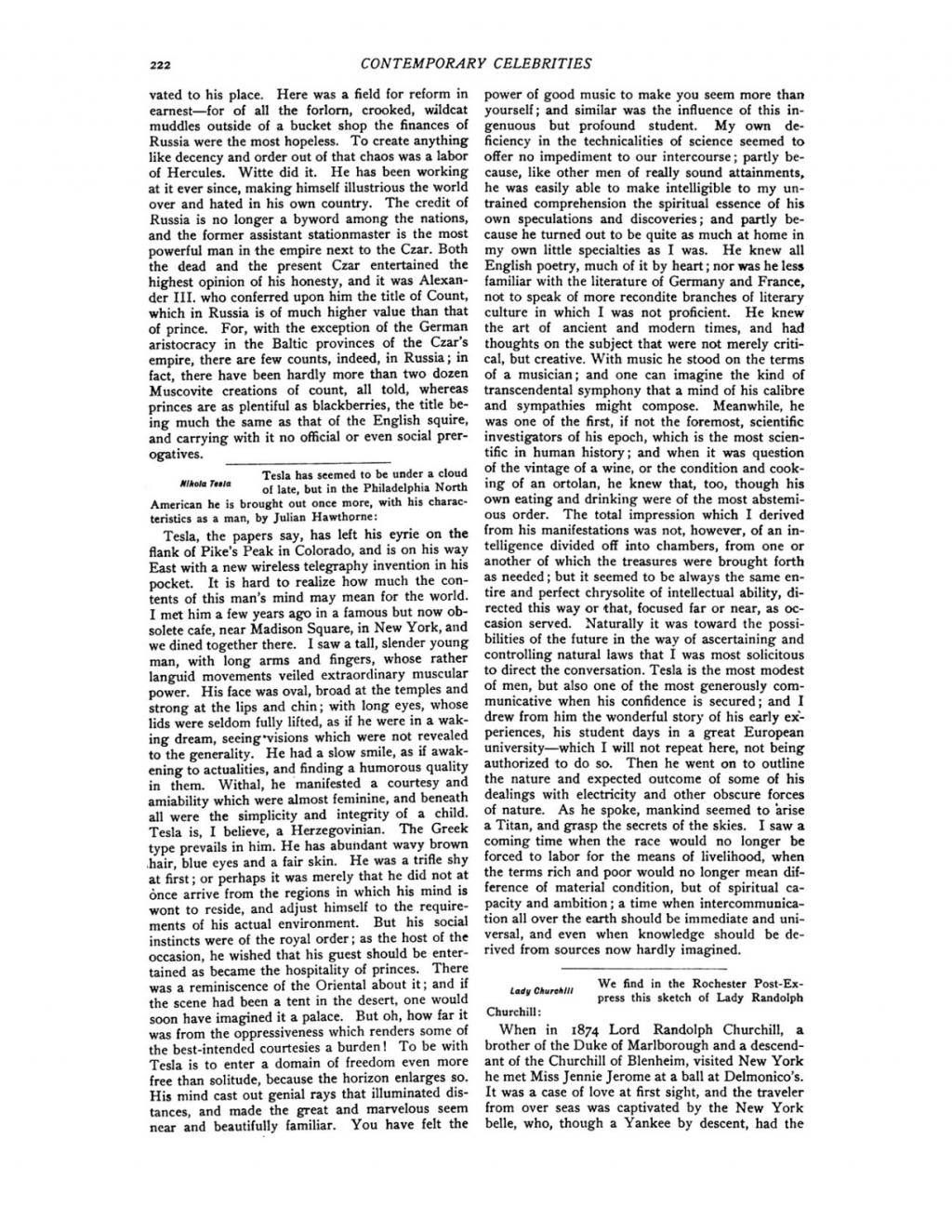