Thinks His “World System” Will Allow Hundreds to Talk at Once Through the Earth.

Inventor Hopes Also to Transmit Pictures by the Same Medium Which Carries the Voice.

Nikola Tesla announced to The Times last night that he had received a patent on an invention which would not only eliminate static interference, the present bugaboo of wireless telephony, but would enable thousands of persons to talk at once between wireless stations and make it possible for those talking to see one another by wireless, regardless of the distance separating them. He said also that with his wireless station now in the process of construction on Long Island he hoped to make New York one of the central exchanges in a world system of wireless telephony.

Mr. Tesla has been working on wireless problems for many years. Yesterday he exhibited an article published in The Electrical World eleven years ago, in which he predicted not only wireless telephony on a commercial basis but that it would be possible to identify the voice of an acquaintance over any distance. That its operator in Hawaii was able to distinguish the voice of an engineer friend at Arlington, Va., was announced by the American Telephone and Telegraph Company as the most marked triumph of its communication by wireless telephone from the naval radio station at Arlington to Pearl Harbor, Hawaii, a distance of 4,000 miles.

The inventor, who has won fame by his electrical inventions, dictated this statement yesterday:

“The experts carrying out this brilliant experiment are naturally deserving of great credit for the skill they have shown in perfecting the devices. These are of two kinds: First, those serving to control transmission, and, second, those magnifying the received impulse. That the control of transmission is perfect is plain to experts from the fact the Arlington, Mare Island, and Pearl Harbor plants are all inefficient and that the distance of telephonic communication is equal to that of telegraphic transmission. It is also perfectly apparent that the chief merit of the application lies in the magnification of the microphonic impulse. It must not be imagined that we deal here with new discoveries. The improvement simply concerns the control of the transmitted and the magnification of the received impulse, but the wireless system is the same. This can never be changed.

“That it is practicable to project the human voice not only to a distance of 5,000 miles, but clear across the globe, I demonstrated by experiments in Colorado in 1899. Among my publications I would refer to an article in The Electrical World of March 5, 1904, but describing really tests I made in 1899. The facts which I pointed out in the article were of much greater significance than that of the experiments reported, although this should be taken in a scientific sense, as the experiments were simply scientific demonstrations. I pointed out then that the modulations of the human voice can be reproduced more clearly through the earth than through wire. It is difficult for the layman to understand, but it is an absolute fact that transmission through the earth with the proper apparatus is not more difficult than the sending of a message on a wire strung across a room. This wonderful property of the planet, that, electrically speaking, is through its very bigness small, is of incalculable significance for the future of mankind.

“These tests made between Washington and Honolulu will act as an immense stimulus to wireless telephony and would be of much more value to the world if the principles of the transmission were understood. But they are not. Even now, fifteen years after the fundamental principles have been demonstrated and the possibilities shown, there are many experts in the dark.

“For instance, it is claimed that static disturbances will fatally interfere with the transmission, while, as a matter of fact, there is no static disturbance possible in properly designed transmission and receiving circuits. Quite recently I have described, in a patent, circuits which are absolutely immune to static and other interferences — so much so that when a telephone is attached, there is absolute silence, even lightning in the immediate vicinity not producing a click of the diaphragm, while in the ordinary telephonic conversation there are all kinds of noises. Transmission without static interference has many wonderful properties besides, first of which is that unlimited amounts of power can be transmitted with very small loss.

“I have myself erected a plant for the purpose of connecting by wireless telephone the chief centres of the world, and from this plant as many as a hundred will be able to talk absolutely without interference and with absolute secrecy. This plant would simply be connected with the telephone central exchange of New York City, and any subscriber will be able to talk to any other telephone subscriber in the world, and all this without any change in his apparatus. This plan has been called my “world system.” By the same means I propose also to transmit pictures and project images, so that the subscriber will not only hear the voice, but see the person to whom he is talking. Pictures transmitted over wires is a perfectly simple art practiced today. Many inventors have labored on it, but the chief credit is due Professor Korn of Munich.

“His apparatus can be attached to a wireless plant and at any other wireless plant can be reproduced. I have undertaken this in the hope of establishing a service which would greatly facilitate the work of the press. A picture could be sent from a battlefield in Europe to New York in five minutes if the proper instruments were available.

“A further advantage would be that transmission is instant and free of the unavoidable delay experienced with the use of wires and cables. As I have already made known, the current passes through the earth, starting from the transmission station with infinite speed, slowing down to the speed of light at a distance of 6,000 miles, then increasing in speed from that region and reaching the receiving station again with infinite velocity.

“It’s all a wonderful thing. Wireless is coming to mankind in its full meaning like a hurricane some of these days. Some day there will be, say, six great wireless telephone stations in a ‘world system’ connecting all the inhabitants of this earth to one another, not only by voice but by sight. It’s surely coming. 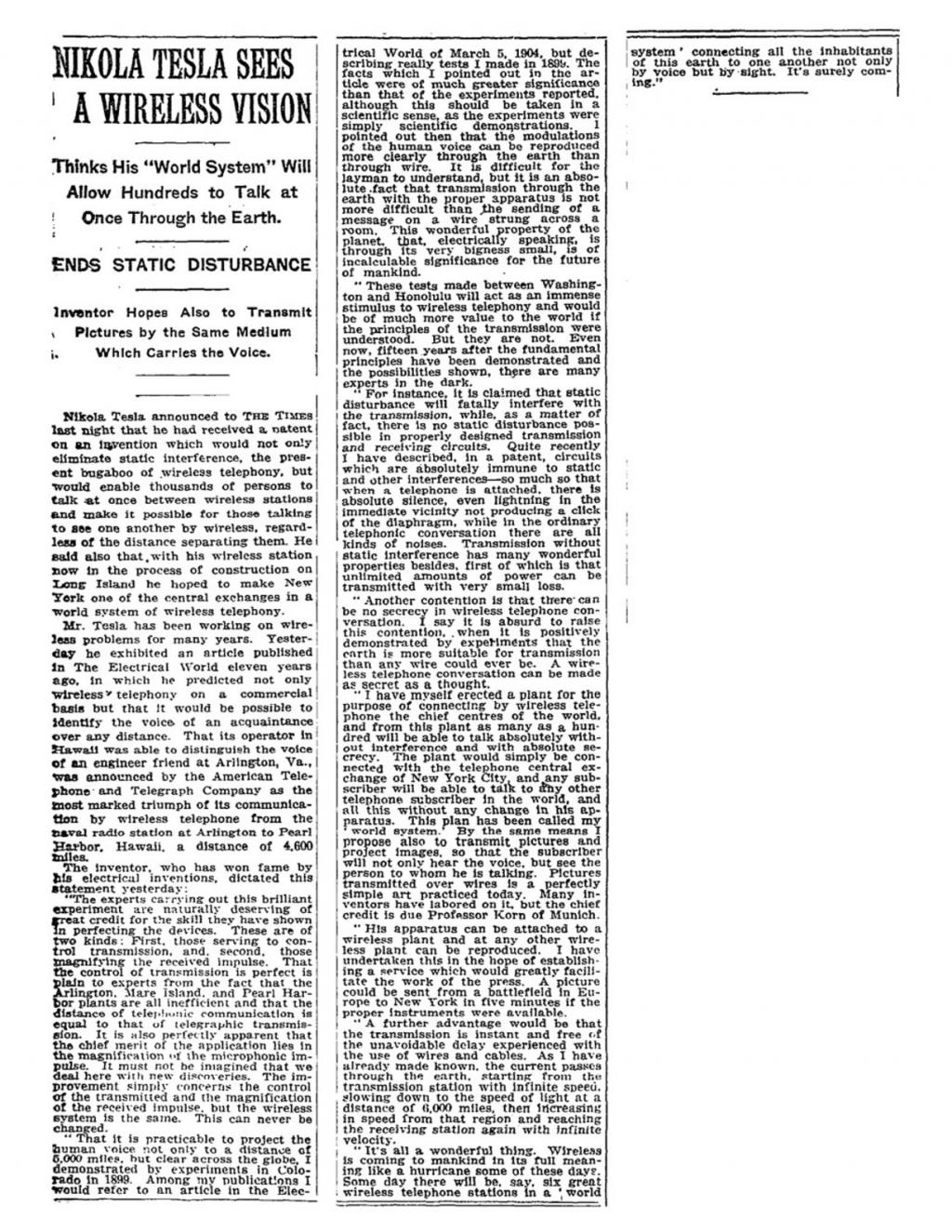