The conquest of elements, annihilation of distance in the transmission of force and numerous other revolutionary advances have brought us face to face with problems new and unforeseen. To meet these is an imperative necessity rendered especially pressing through the struggle which is now being waged between nations on a stupendous scale unprecedented in history.

This country, finding it impossible to remain an inactive witness of medieval barbarism and disregard of sacred rights, has taken up arms in a spirit broad and impartial and in the interest of humanity and peace. Its participation will be absolutely decisive as regards the final result, but those who expect a speedy termination of the conflict should undeceive themselves.

War, however complex, is essentially a mechanical process, and, in conformity with a universal principle, its duration must be proportionate to the masses set in motion. The truth of this law is borne out by previous records, from which it may be calculated that, barring conditions entirely out of the ordinary, the period should be from five to six years.

Great freedom of institutions, such as we are privileged to enjoy, is not conducive to safety. Militarism is objectionable, but a certain amount of organized discipline is indispensable to a healthy national body. Fortunately, the recognition of this fact has not come too late, for there is no immediate danger, as alarmists would make us believe. The geographical position of this country, its vast resources and wealth, the energy and superior intelligence of its people, make it virtually unconquerable.

We Would Win in the End.

There is no nation to attack us that would not be ultimately defeated in the attempt. But events of the last three years have shown that a combination of many inimical powers is possible, and for such an emergency the United States is wholly unprepared. The first efforts must therefore be devoted to the perfection of the best plea for national protection. This idea has taken hold of the minds of people and great results may be expected from its creative imagination fired by this occasion, such as may in a larger measure recompense for the awful wastage of war.

While the chief reliance in this perilous situation must be placed on the army and navy, it is of the greatest importance to provide a big fleet of aeroplanes and dirigibles for quick movement and observation; also a great number of small high speed craft capable of fulfilling various vital duties as carriers and instruments of defense. These, together with the wireless, will be very effective against the U-boat, of which the cunning and scientific enemy has made a formidable weapon, threatening to paralyze the commerce of the world.

As the first expedient for breaking the submarine blockade, the scheme of employing hundreds of small vessels, advanced by Mr. W. Denman, chairman of the United States Shipping Board, is a most excellent one, which cannot fail to succeed. Another measure which will considerably reduce the toll is to use every possible means for driving the lurking enemy far out into the sea, thus extending the distance at which he must operate and thereby lessening his chances. But a perfect apparatus for revealing his presence is what is most needed at this moment.

A number of devices, magnetic, electric, electro-magnetic or mechanical, more or less known, are available for this purpose. In my own experience it was demonstrated that the small packet boat is capable of affecting a sensitive magnetic indicator at a distance of a few miles. But this effect can be nullified in several ways. With a different form of wireless instrument devised by me some years ago it was found practicable to locate a body of metallic ore below the ground, and it seems that a submarine could be similarly detected.

Sound waves may also be resorted to, but they cannot be depended upon. Another method is that of reflection, which might be rendered practicable, though it is handicapped by experimental difficulties well nigh insuperable. In the present state of the art the wireless principle is the most promising of all, and there is no doubt that it will be applied with telling effect. But we must be prepared for the advent of a large armored submarine of great cruising radius, speed and destructive power which will have to be combated in other ways.

For the time being no effort should be spared to develop aerial machines and motor boats. The effectiveness of these can be largely increased by the use of a turbine, which has been repeatedly referred to in The Herald and is ideally suited for such purposes on account of its extreme lightness, reversibility and other mechanical features. 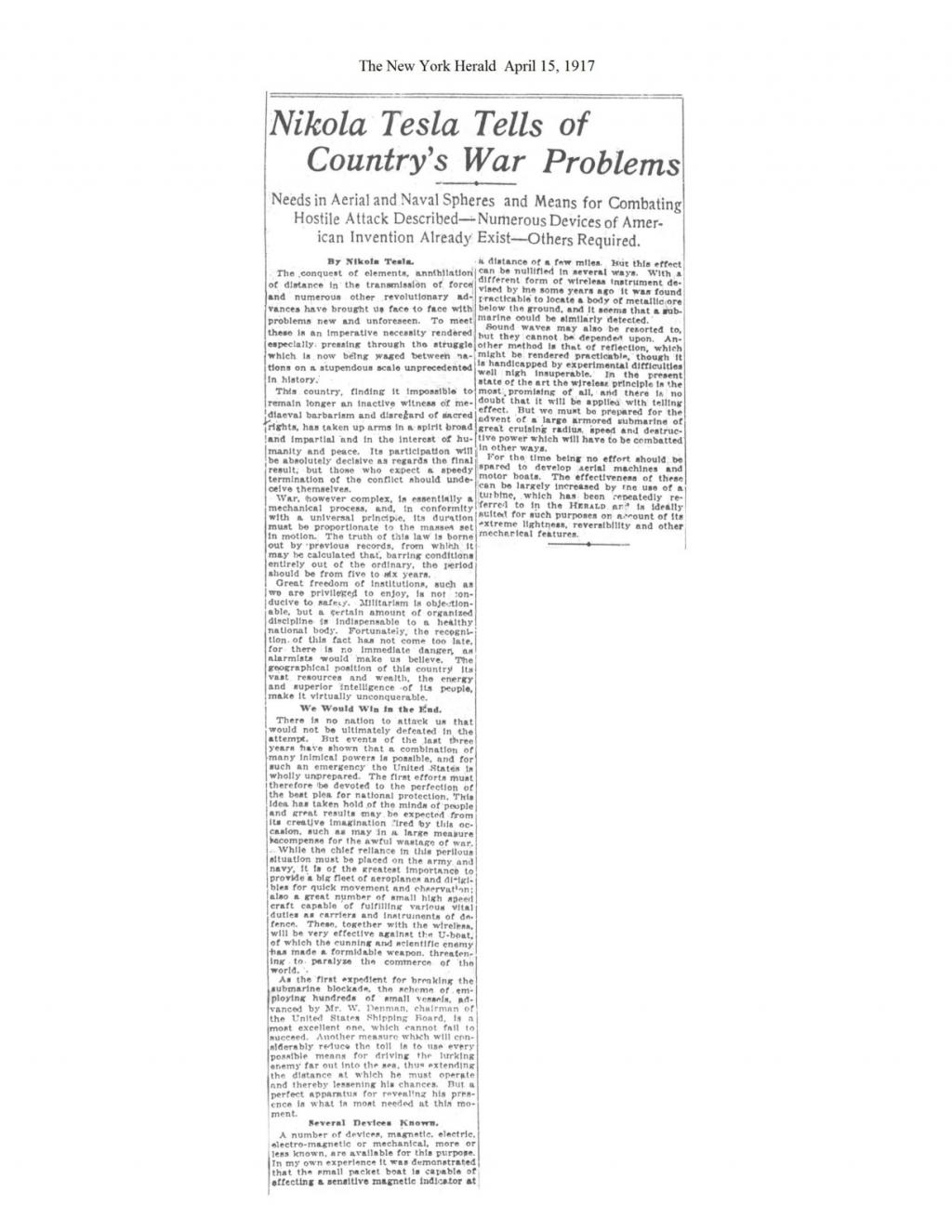