The famed inventor had a fear of germs - but a strange belief compelled him to befriend sick and parasite-laden pigeons. 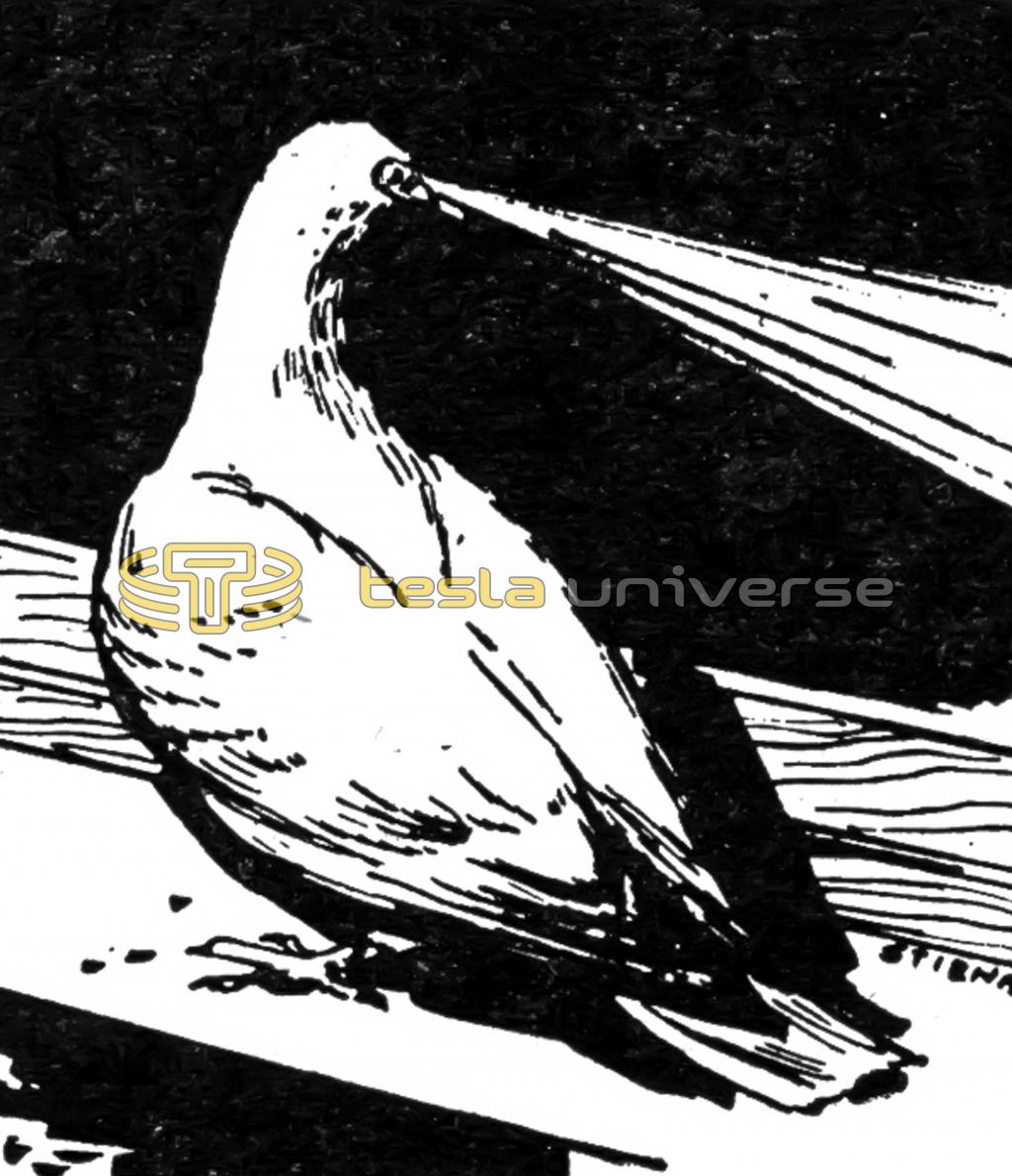 For almost 30 years Nikola Tesla fed the pigeons in Herald Square, Bryant Park, the plaza of the public library at 42nd Street and at St. Patrick's Cathedral in New York. He blew a low whistle, usually after midnight, and the birds gathered from all over. Some perched on his head, some on his shoulders and arms, while others gathered on the ground before him. A few ate seeds out of his hands.

Tesla had a phobia against germs; still he permitted the parasite-laden pigeons to fly all about him. He avoided shaking hands; he washed frequently; he sprayed messenger boys with antiseptic before accepting packages from them; he insisted that no one else should use his table in the hotel dining room; he insisted on a fresh table cloth for every meal, demanded that a stack of 24 white napkins be placed on the table and used a separate napkin to clean every dish, fork, spoon and knife, tossing the napkins on the floor after using them. Silverware and dishes had to be sterilized in the kitchen and only the headwaiter could serve him. Sight of a fly at his table meant the meal must start over from the beginning.

Fear of germs controlled his every action, but he handed out $5 and $10 tips at the end of each meal, so his behavior was tolerated. Because he feared germs he wore only white underwear which he discarded after one day's wear. Handkerchiefs and detachable shirt collars never went to the laundry, either; after one day's use he threw them away.

Pigeons, however, were different. Tesla was willing to overlook lice, psittacosis and tubercular birds because he was searching for the missing pigeon.

Nikola Tesla invented neon and fluorescent lighting, robot machines, power transmission, radio control, guided missiles and the basic requirements for electric clocks. He predicted radio and television, and his Tesla coil is in all broadcasting antenna and in every automobile ignition system. He discovered the heating effect of shortwave currents on the human body and suggested their use in treating diseases. His greatest invention was the rotating magnetic field which made possible the alternating current induction motor. Before his time, transmission of electricity was expensive and possible for a distance of only a mile or mile and a half. Tesla's alternating current motor made possible transmission of power at reasonable/economical cost over great distances. It ushered in the age of electricity.

Though Tesla had intense psychic power, he denied it at every opportunity. He was a precocious child, and he also had two wonderful gifts. First, his memory was amazing. He could look into a book or newspaper, get a complete mental picture of its contents, and years later he could repeat, almost word for word, everything that was printed in the book or newspaper. His second gift was visualization. Before starting an invention, he visualized every bit of it as a unit, down to the finest detail. Then he built his machine without any other blueprint.

While feeding pigeons Tesla noticed and befriended a pure white bird with light grey tips on her wings. No matter where he went this pigeon would find him. If he wanted her, he had only to think about her and she would show up. He felt that he could always accomplish anything he began, no matter how ambitious the scheme, so long as this pigeon lived. He believed that his life work would end when this pigeon died - unless it was reincarnated. However, the word reincarnated was forbidden to him since he said he believed the soul dies with the body, so he never expressed himself in this regard, although his thinking on the subject became known.

Wherever he lived, in various hotels, he left an open window so pigeons could enter and leave. Nests and bird seed were provided for breeding pigeons. Numerous times he was asked to move from hotels because of the pigeons.

He told a friend that the white pigeon was the joy of his life. Once when she came to his room and was ill, he stayed beside her for days.

One night as he lay in bed in the dark the bird flew through the open window and landed on his desk. Feeling that she wanted him and wished to tell him something important, Tesla got up and went to her. She was dying. As the realization came to Tesla he said he saw a brilliant light, blinding and powerful, coming from the pigeon's eyes. He claimed this dazzling light was very real and more intense than any he ever had produced in his laboratory.

Much of his happiness went out of Tesla's life with the bird's death. He confided to a friend that he continued to feed pigeons because, after all, he said, “who can tell...?”

When the story about the light from the pigeon's eyes was first published some critics believed it was a figment of Tesla's imagination. A few years before his death Tesla had suffered severe injury in a traffic accident but had refused medical care. Some of his acquaintances believed he became a mixed up, incoherent genius as a result of the accident. They discounted the story of the pigeon.

But recently a former associate was asked to prepare material about Tesla for publication. While he was working on it a pigeon came to his window and ejected powerful, blinding rays of brilliant light from its eyes. The associate's thinking on Tesla's story of light from the pigeon's eyes changed abruptly.

This does not solve the riddle, of course. Was Tesla's pigeon reborn? Or did Tesla's spirit return to tell his associate that his search for the missing pigeon had ended -
in Heaven? 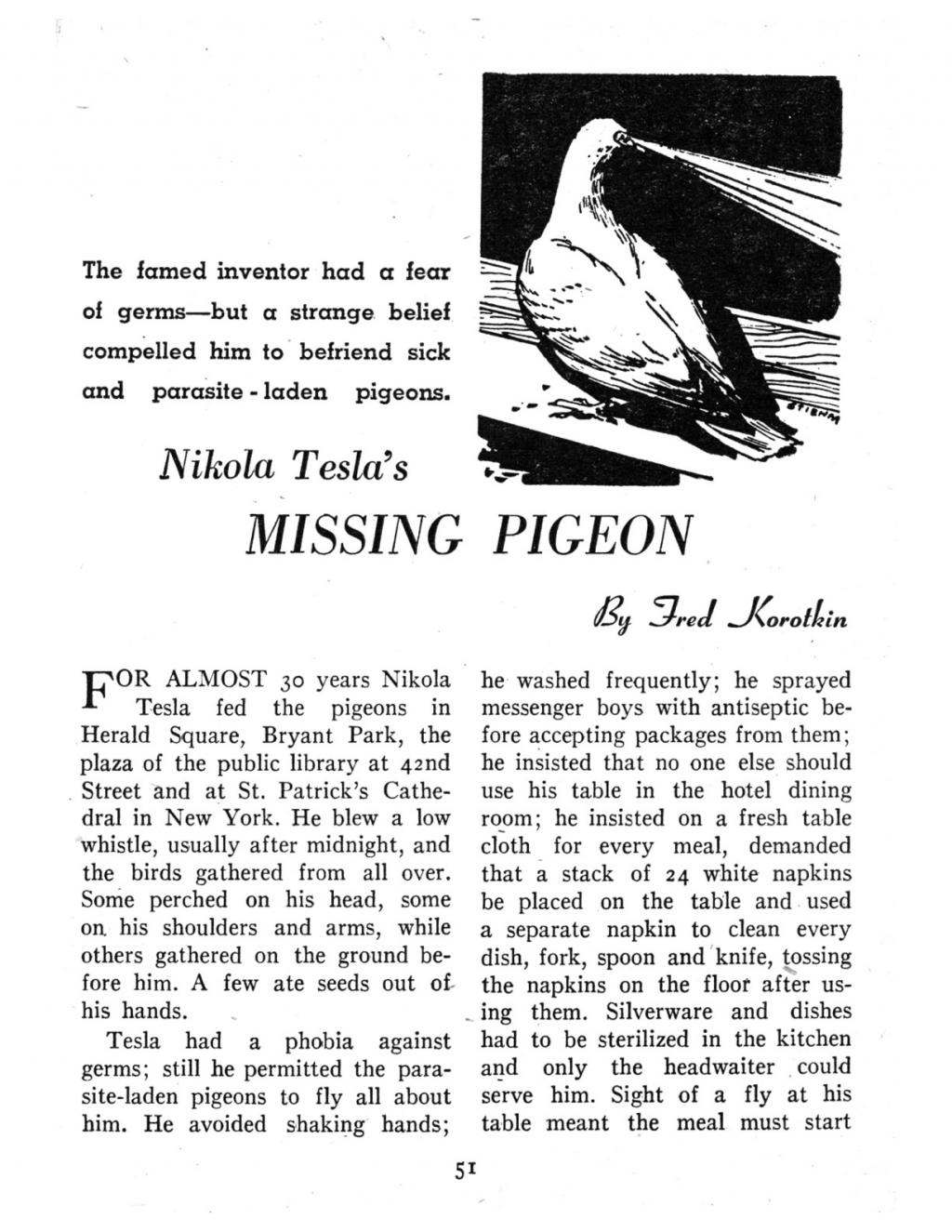