The following is an abstract of a Paper of which an advance proof was kindly sent us by Prof. Elihu Thomson:-

In connection with an experimental investigation of the properties of alternating currents of high frequency, and the phenomena which they present, it had occurred to me that it would be desirable to obtain data concerning the physiological effects of these currents as compared with the effects of currents of ordinary frequency. I had constructed a machine on the type of my new alternating dynamo, accounts of which were published some time last year. In this machine an iron mass only is revolved, the central portion of which carries projections which pass near to the coils in which the currents are induced, which may be termed the armature coils, carried on the inner face of a laminated structure, in turn supported by the outer frame work of the machine. The machine, with 100 armature coils and a speed of 5,000 revolutions per minute, gives a little over 8,000 alternations per second. The publication of brief notices of some of the results obtained in the operation of this machine led Dr. Edward Tatum, of Yonkers, N.Y., to correspond with me with the view of finding out whether I had intended to conduct any physiological experiments with the currents, and indicating his desire to experiment in this direction if the machinery for obtaining the currents could be placed at his disposal for a short time. Accordingly the machine was sent to Dr. Tatum some time last fall, and was used by him in making a series of experiments, the results of which cannot fail to be of the highest interest to electricians and physiologists.

“The most definite and perhaps the most striking, as well as physiologically instructive result has been in regard to the fatal efficiency of such rapidly alternating currents. When the circuit is formed through the head and body (of dogs) death occurs in the same manner as with other sources of current (which are made strong enough to kill by a closure lasting not more than two or three seconds) - that is, by primary arrest and paralysis of the heart; but, taking the fatal efficiencies of different sorts of currents as inversely proportional to the current strengths required to kill under other wise, similar conditions, a rate of 4,500 per second is not only far less efficient than rates of a few hundred, but it is distinctly less efficient than a continuous battery current. It is remarkable that rates of 300 and of 120 alternations per second are fatally efficient at very nearly the inverse ratio of the numbers but, still more remarkable, that the very highest rates should also present a strikingly near approach to a similar ratio. It must be noted, however, that no such ratio can hold throughout the whole range, for 36 alternations per second (from the same machine as furnished 120 and the 300 rates) are again distinctly less efficient than 120 - something like two-thirds as efficient.”

Dr. Tatum goes on to point out that a potential of 450 volts was survived at the high rate of alternations, and the fatal current reached only at 495 volts, while 45 volts at 120 alternations similarly applied to the dog suffices to pass a fatal current. Dr. Tatum also determined the ratio of pressure or potential to current in the dog just after the cessation of respiration, using in rotation, twice repeated, first, a continuous pressure or potential; secondly, an alternating one at a rate of 120; and, thirdly, an alternating potential at a rate of 4,500 per. second, at about 100 volts, and states: - “This ratio was so uniform (the extremes observed differing by less than 3 per cent.) as to dispose of any suspicion that the high-period currents distributed themselves essentially different from others in the animal’s body.

“... In regard to the physiological as distinguished from the fatal characteristics of the high-period machine, I am only able to state the results in terms of pressure instead of terms of current, as I should prefer. The limits of voluntary toleration for alternating pressures (applied with sponge electrodes) seems to depend very little on the frequency of alternation. For all the frequencies I have mentioned the limit has been found between 10 and 15 volts for applications about the face and head, and between 40 and 50 volts between the hands, without any decided preference in either case for one rate more than another.

“The cause of the pain which limits voluntary toleration seems to be in all cases chiefly in the muscular contraction produced. At 4,500 this muscular contraction is usually free from the thrill experienced even at 300; resembling, on the temples, nothing I can think of so much as firm pressure with the knuckles.

“The cutaneous nerves are distinctly less painfully affected at the high rate. The visual mechanism cannot be excited at the high rate, even by a pressure of 15 volts, so as to cause a sensation of flashes of light, although two or three volts similarly applied at 120 alternations causes such flashes very energetically. Sensations of taste are also absent.”

In presenting these results I take occasion to express my sincere regret that his ill-health has prevented the continuance of the work in the direction laid out by the Doctor himself, and to express, also, the hope that he may be able to take up the further investigations at some other future time. 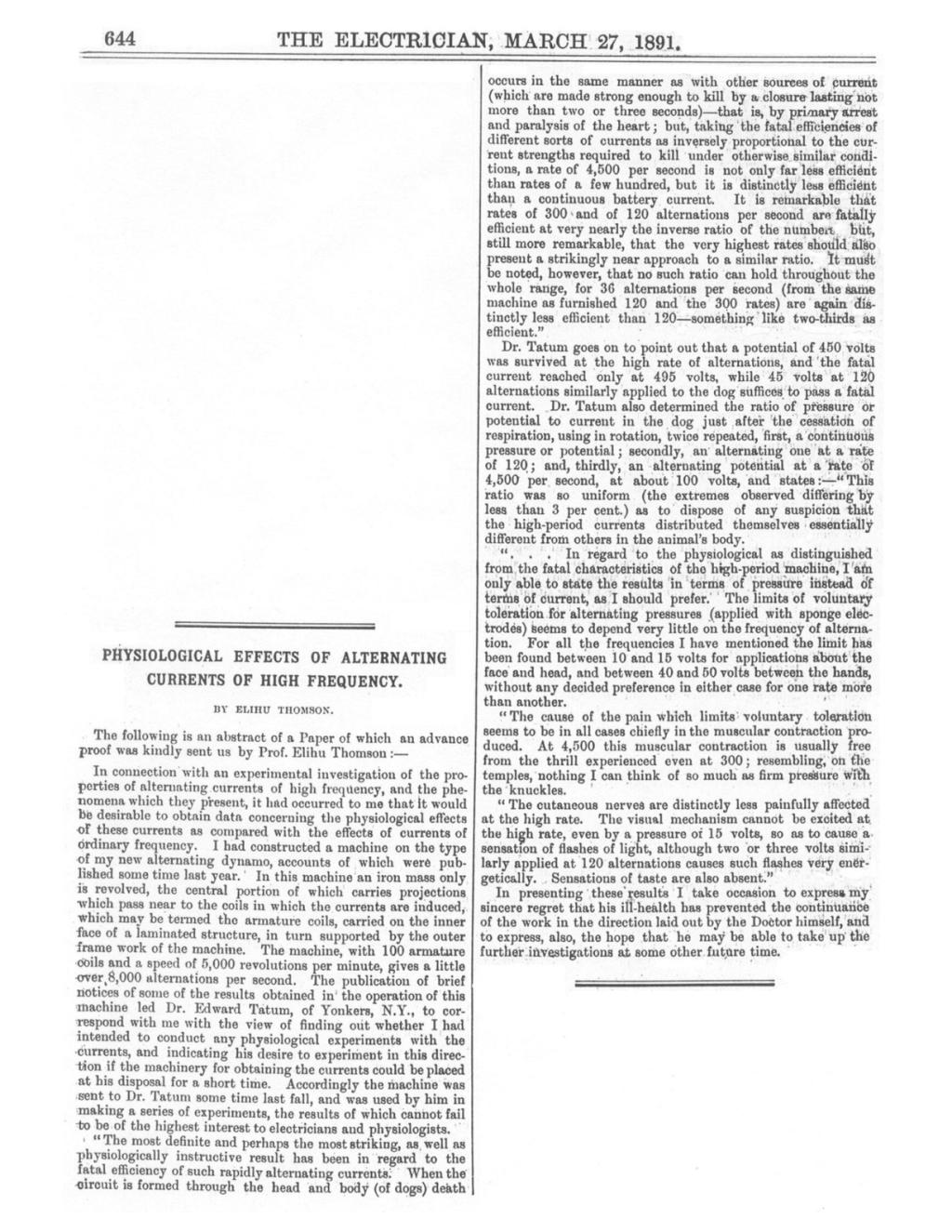