In his address on “Pioneers’ Day” at the recent meeting of the National Electric Association at Providence (R.I.), Prof. Elihu Thomson gave the following interesting account of his early experiences: - Recounting my own experience in electric lighting, I may say that I built a small dynamo about 1876 to run an arc light. It was a success, and it led to the construction of other dynamos. When I came, however, to the commercial part of the business, which began in 1878 or 1879, I found that there were many difficulties to overcome, and not the least of these difficulties was the getting of steady power to run the machines.

The first Thomson-Houston three-coil armature machine intended for commercial use was capable of running from four to eight lights in series. I carefully examined every inch of the wire, and insulated the whole thing myself. Our first machine was put up in a bakery in Philadelphia, where it was used all night, and it was rather tenderly nursed by us. Sometimes we were up all night tending to this baby, and under conditions which were not altogether agreeable in the summer, as there is a good deal of waste heat in a bakery. The temperature was sometimes as high as 140 deg. After running these machines some time a Company was organised, which is now the Thomson-Houston Electric Company.

It was organised in a modest way in New Britain, Conn. I became electrician of this small Company, and the apparatus was made in New Britain in an old basket shop. This was the beginning of our experiences. We soon got into another shop and began the construction of apparatus for commercial use. After we got into operation our difficulties were not, by any means, over. We had to develop all sorts of devices. We had to overcome conditions constantly arising to discourage us. When one thing was accomplished we were met by other reverses.

The Brush Company saw our beginnings of success and tried to buy up a majority interest in our little Company in New Britain, apparently for the purpose of entirely swallowing us. Subsequently, however, in the same year, certain parties in Lynn purchased a majority interest in the stock, and what was the American Electric Company of New Britain started operations in Lynn. The Brush Company, as you are probably aware, has been swallowed up by us, the infant they tried to swallow. Such is fate.

We have the firmest confidence in the expansion of the electrical industries. We are absolutely certain that the business is going to be greater and greater as time goes by. We have calls now for machines and dynamos up to 500 and 1,000 H.P., where a few years ago we thought it an unusual thing to have 100 and 200 H.P. machines, and it looks very much as though in the near future machines of much larger capacity would be demanded for the work of installation. 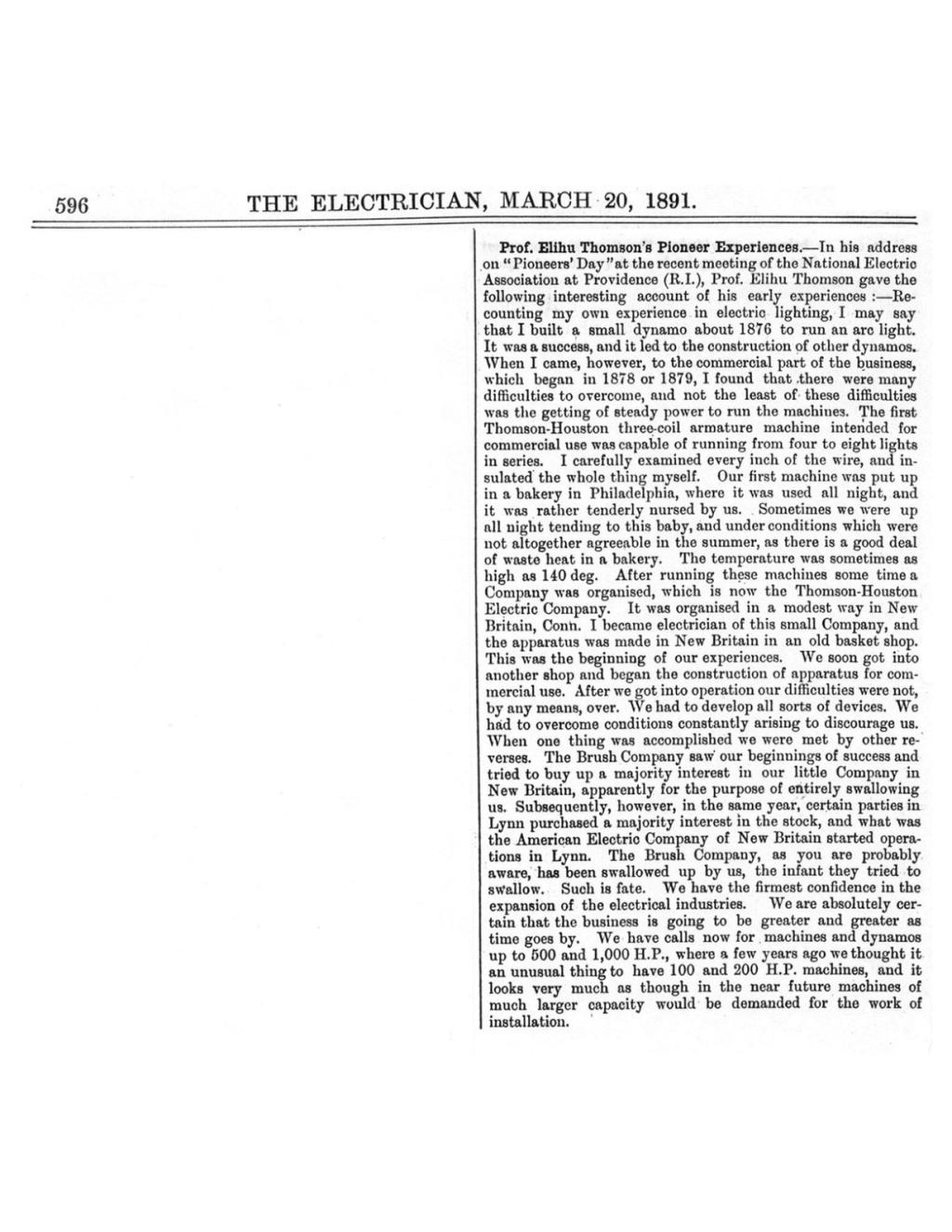