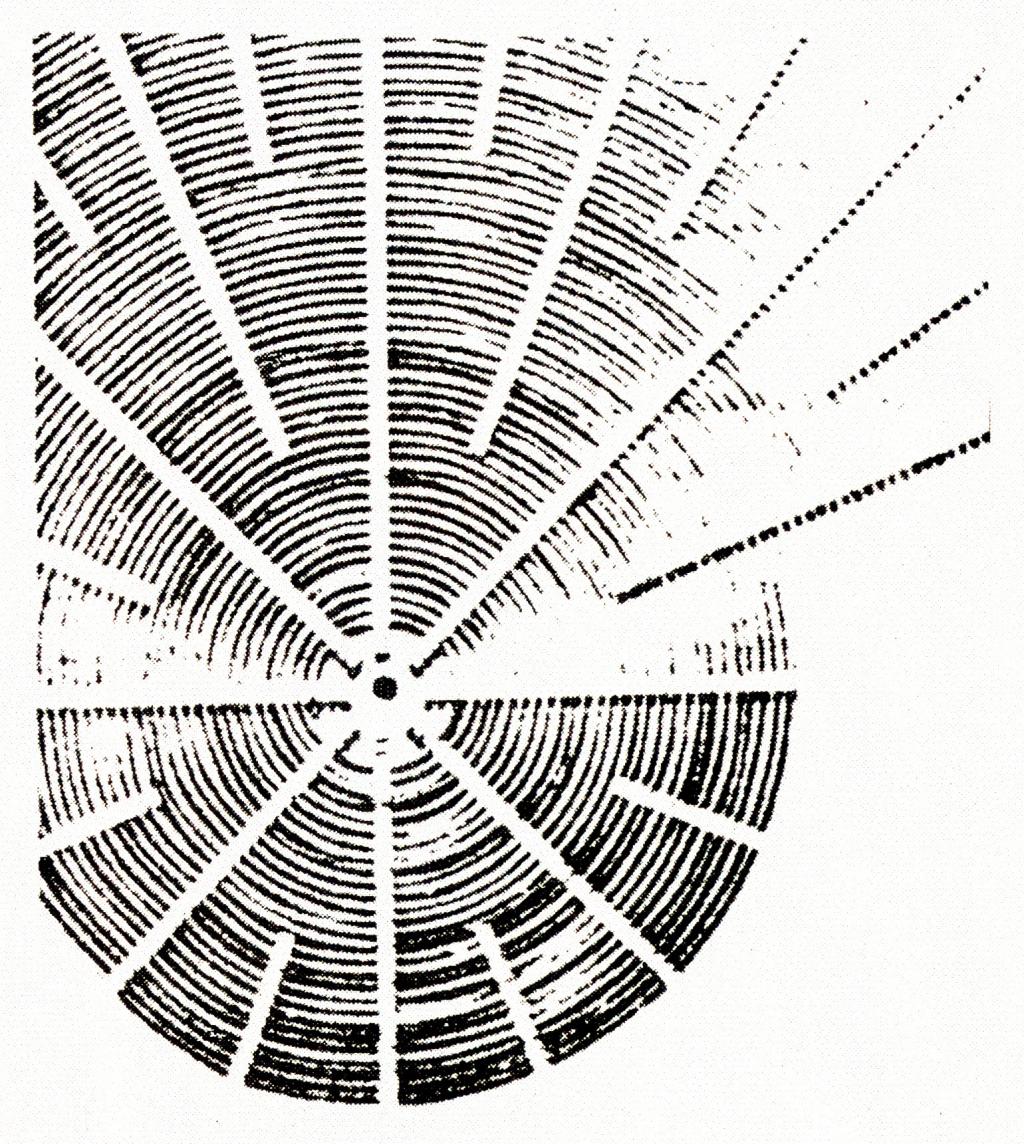 Ed. note: Tesla’s contributions were of such a farseeing calibre in both function and manifestation, that today his process of inventing might be called “channeling.” Some people say he came from Venus, though Tesla supposedly had very materialistic notions regarding human life. East coast writer and researcher Fred Bobb offers this overview on what may be Tesla’s most way-out experiment - at least during his best-known, turn-of-the-century lifetime.

Though once thought impossible, the possibility of radio waves offering a pragmatic mode of interplanetary communication deeply interested Nikola Tesla. He began his intense investigations of high voltage, high frequency electrical transmissions in June of 1899.

One night, during the course of experimenting with his 200-foot radio transmitter in Colorado Springs, Tesla heard mysterious, rhythmic sounds coming out of his sensitive radio receiver. Awestruck, he listened intently, and soon had to discard theories that electrical actions were only disturbances caused by the sun, Aurora Borealis or earth currents. Tesla could only deduce that such regular patterns were a message - a message to earth by creatures from outer space!

The faint, unknown message from another world had a profound effect on Tesla, and would guide him throughout his research career. The signal read, “One...two...three. one... two...three.”

Such a simple transmission contains the basic concept that most SETI [Search for Extraterrestrial Intelligence] researchers still hold about interstellar messages. Earthly SETI scientists and engineers assume that SETI researchers from outer space would likely have technological backgrounds similar to theirs. Since they usually “talk shop” with each other in mathematics, it’s assumed that scientists and engineers trying to communicate across the vastness of space would likewise use math as their language.

Tesla believed that two intelligent civilizations having no words in common couldn’t help but comprehend the basic principles of addition.

Therefore, the easiest way to get an ET species to realize that an intelligent message is being sent out is for the sender to start with one pulse, then two, then three, then repeating: “One...two...three...”

Tesla’s conclusions on the subject were met with intense ridicule from his peers. Although disenchanted with these stiffnecked reactions, he steadfastly maintained his position, and began to puzzle over the best way to answer the signals - which he sincerely believed were from the angry red planet Mars.

In 1902, British electrical genius Lord Kelvin visited the U.S. He spurred Tesla on with a high vote of confidence, openly concurring with the theory that Mars was signalling America. Although the scientist became involved with more practical research endeavors - for George Westinghouse and J.P. Morgan - he never lost sight of his dream to talk with the stars.

A recently re-discovered letter from Tesla, addressed to the editor of the New York Times, expounded on these convictions. It appeared in the Times on May 23, 1909, and in it he again reiterates his obsession with the plausibilities of cosmic communion and extraterrestrial life.

“Of all the evidences of narrow mindedness and folly, I know of no greater one than the stupid belief that this little planet is singled out to be the seat of life, and that all other heavenly bodies are fiery masses or lumps of ice.”

Tesla’s letter also denounced most contemporary signalling theories as inadequate. He had no faith in the mirrors of Prof. W.H. Pickering, the parabolic reflectors of Prof. William R. Brooks, the geometric figures of Prof. E. Doolittle or the alkali desert usage promulgated by Prof. R.W. Wood. Tesla concluded his letter by outlining what he thought was the only feasible method of contacting the inhabitants of Mars:

“A circuit properly designed and arranged is connected with one of its ends to an insulated terminal at some height and with the other to the earth. Inductively linked with it is another circuit in which electrical oscillations of great intensity are set up by means now familiar to electricians. This combination of apparatus is known as my wireless transmitter.

“By careful attunement of the circuits the expert can produce a vibration of extraordinary power, but when certain artifices, which I have not yet described, are resorted to, the oscillation reaches transcending intensity. By this means, as told in my published technical records, I have passed a powerful current around the globe and attained activities of many millions of horsepower. Assuming only a rate of 15,000,000, readily attainable, it is 6,000 times more than that produceable by the Pickering mirrors. ”

Tesla insisted that if his system were also utilized by the electricians of Mars, they could multiply their receiving effects many thousands of times, concentrating energy received over dozens of square miles!

Tesla was purposely elusive on the specifics of “artifices” or procedures needed to construct the interplanetary signals. No patents were ever issued for an interplanetary communicator.

But his passion remained. Even in July of 1937, upon the occasion of being presented with the Yugoslavian Grand Cordon of the White Eagle and the Czechoslovakian Grand Cordon of the White Lion awards, Tesla continued to insist that life on other planets was a “certitude” and that his interplanetary communicator was fully developed and ready for use. He even boasted of collecting the Pierre Guzman Prize offered by the French Academy of Sciences for interstellar communication.

These feats never came to pass, however, and Tesla’s methods of interplanetary contact died with him in 1943. 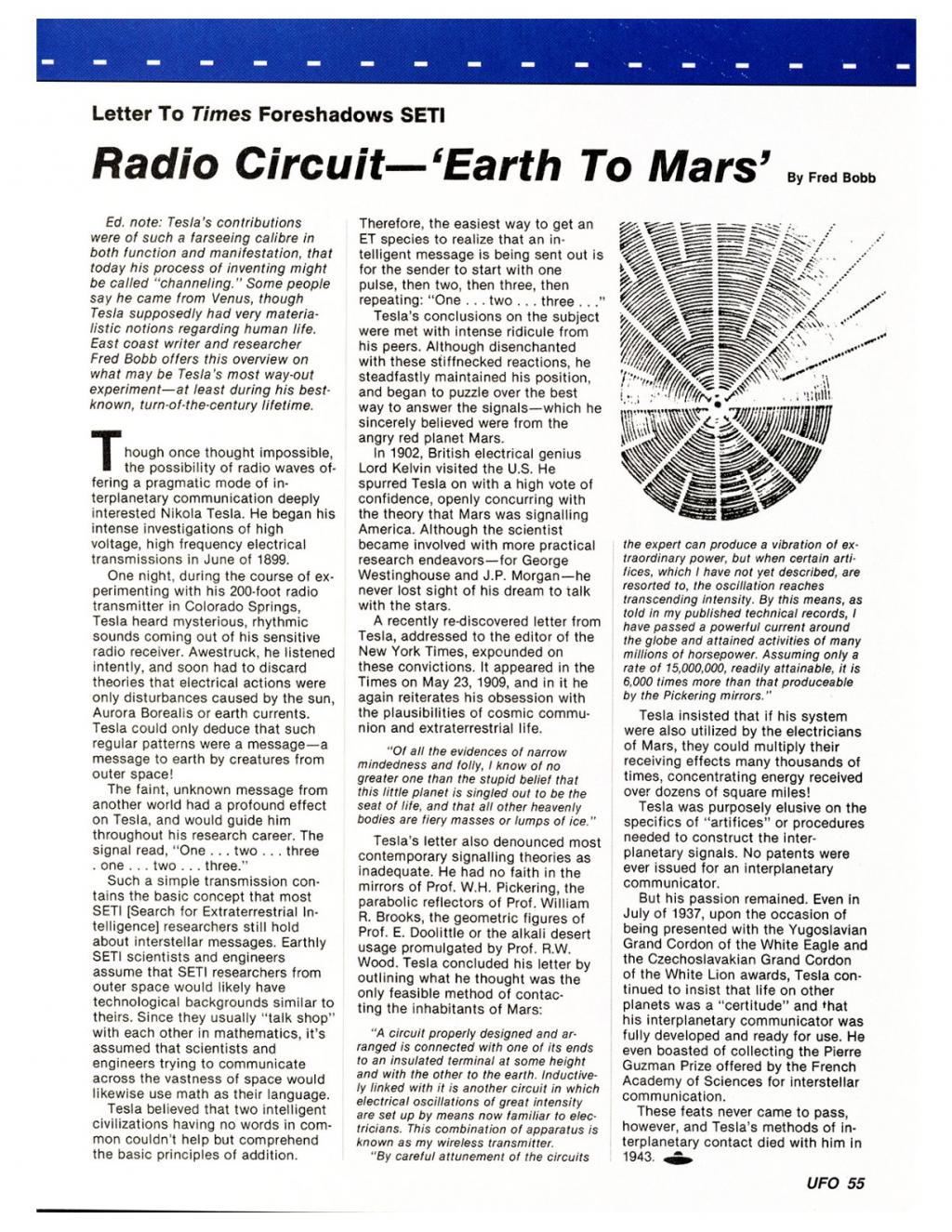