Energized by the ‘Ethers’

When it comes to the pragmatics of Tesla tech, five electrical wizards in California teeter on the threshold of electric breakthrough.

Dollard, it should be noted, absolutely does not see eye-to-eye with Tom Bearden when it comes to scalar theory. How do they differ? “Primarily in the mathematics,” says Carson, who spoke with UFO recently by phone.

“Incidentally, the human brain is a scalar transmitter,” Carson casually interjected. “We’re working on ‘free energy’ research, and Tesla tech in general. Tesla knew how to extract energy from the universe. And it looks like he may have been involved with gravity research, too... Once you see how it works, you’ll see that 80 percent of conventional physics is incorrect! The ‘ether’ actually exists. We’ve (incorrectly) learned that there’s nothing in a vacuum... but free energy is everywhere.”

Apparently the banking establishment and oil interests don’t want alternatives to be well understood: “In 1910, J.P. Morgan hired people to disprove the ‘ether’ theory. That made it easier for him to introduce oil-burning technology.”

“Don’t forget to emphasize that Tesla is responsible for the AC (alternating current) system,” he said. “Yet here’s our energy company - called Southern California Edison!”

Go figure it. Despite his achievements, Nikola Tesla’s name and honor, not to mention his keys to unlimited free energy, sank into the corporate abyss, in favor of costly, non-reproduceable energy systems. Will determined enclaves of free energy scientists like the Borderland group revive his discoveries and thereby free mankind?

If so, planetary energy liberation is being prefaced by the language of divination and metaphysics, which these adventurous researchers are unafraid to use. “Once you’ve cracked this free energy thing, you can outdo gravity. You can even transcend time,” Carson rhapsodizes.

Yeah, but what about the machines? “We have five or six big ones and a few smaller jobs,” he says, “We only fire ’em up about once a month. They do some pretty strange things.” In the meantime the group is producing a videotape demonstrating the Tesla devices in action, to be marketed through Borderland Sciences.

“This technology can’t be phased in all at once,” Carson said, “We’re energy experimenters who are continually discovering new things as we go along.

“We’re dealing with the life force itself ” - V.C. 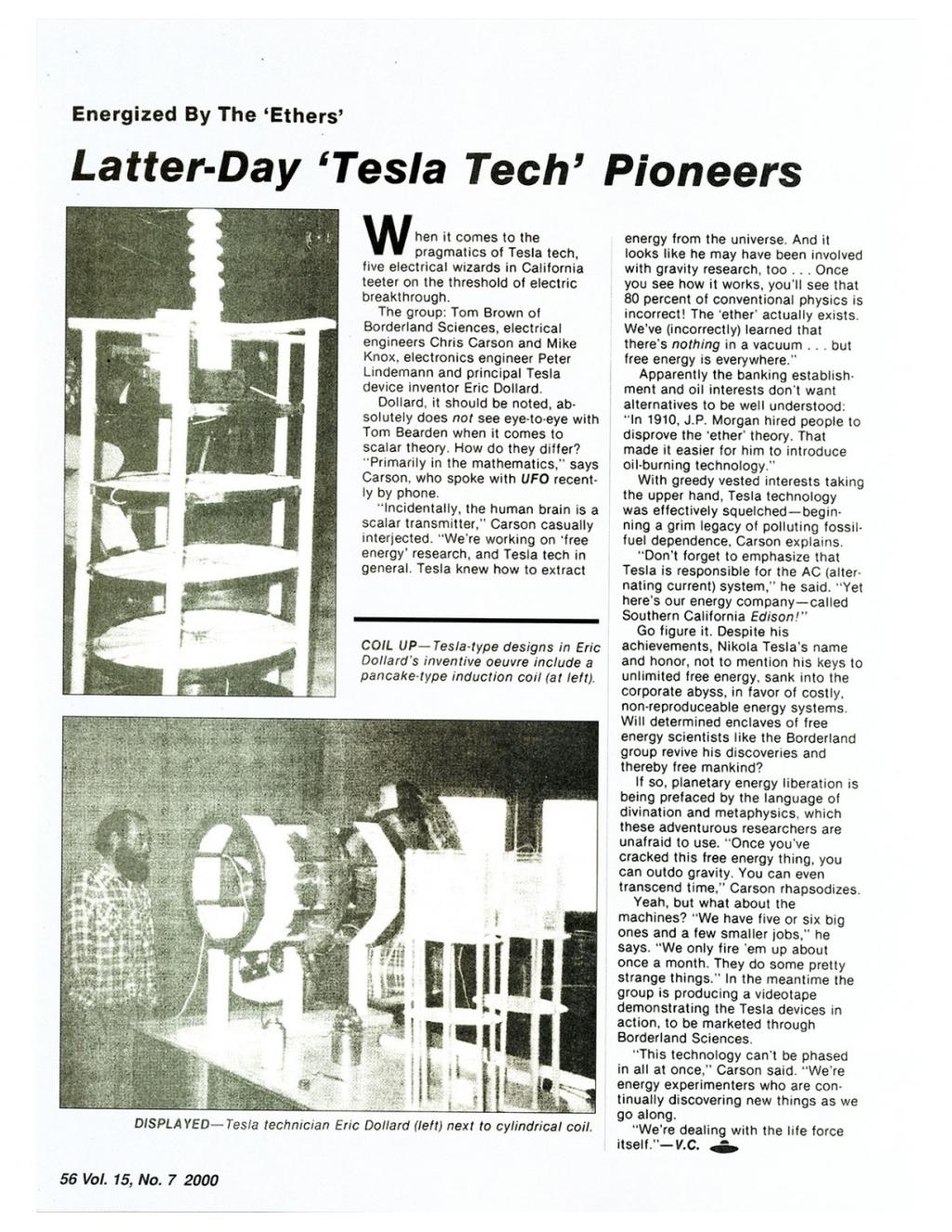