Rare notes from Tesla on Wardenclyffe

Leland Anderson has kindly provided copies of rare documents from the Tesla Museum in Belgrade. The papers reproduced in this report supply information about the Wardenclyffe tower, and show that the design process wasn't as automatic as legend leads us to believe.

Tesla's tower at Wardenclyffe is perhaps as enigmatic as the prodigal genius was himself. (Figs. 1-3 show in part a conceptual evolution of the tower.) While Tesla aficionados have scraped the archives and haggled with politicos to obtain even the minutest revelations on how this device might have actually been capable of transmitting energy worldwide, nobody seems to know how this was to be effected. In what follows, the contents of some practically-uncirculated papers, that Leland Anderson managed to obtain, are reproduced in full.

The first note, written on Waldorf-Astoria letterhead, discloses Tesla's reasoning behind some of the dimensional specifications required in an early design for the tower which he claimed would be capable of transmitting electricity worldwide by means of earth resonance. The letters reprinted here were all written in 1901. Actual construction of the tower did not start until December 12, 1901.

New York May 29. 1901
from old note
In annexed sketch [See Fig. 4.] a terminal C in form of a roof is supported on conducting supports L1L1. Terminal C1, is adjustable and in contact with structure of roof, or terminal C1. A resonating system C2ℓSE discharges with C1 and produces oscillations in system CL1L1E1E1. This arrangement obviates necessity to support roof or terminal C on insulated supports.

Now in a sketch or scheme the difficulty will be probably to get the oscillations of the free system CL1L1E1E1 slow enough to be very effective in transmission through earth as in my system. The length of conductors in the free system should be λ/4, and the length of the discharging current should be 3/4 λ or n/4 λ eventually, n being uneven number.

the period of the system. We should have vibration not much quicker than 100,000 and to satisfy this L would have to be:

P.S. The charging and discharge current may even be of different period and both vibrations used to excite receive.

The person who proofread the decipherer's notes found fault with Tesla's analysis, stating that in order to limit the induction to 225,000 cm, the tower would need to be nearly three times taller than Tesla anticipated, or 1,404 feet high.

As it was, the Wardenclyffe Tower project was very large, and involved numerous construction crews. The following note was sent to Margaret Cheney, while she was writing Tesla's biography.

Wardenclyffe Project
Reference has been made by O'Neill and contemporary newspaper accounts of the large crew that Tesla had working for him at Wardenclyffe. Instead of lust referring to the "'large crew" as such, it might be a good idea to sprinkle in a few names of Tesla's direct assistants. They were:

Letters
The next three letters illustrate, to a small degree. the breadth of the concerns Tesla had while Overseeing the building of his tower. The first two are written to the architect, Stanford White; the third is to the company that was to furnish the building's boilers.

My Dear Stanford:
I have seen the American Bridge people today to ascertain whether they will be able to construct the cupola of my building without much delay. As this item will consume the longest time, it is necessary to take all the preliminary steps so that the work may begin just as soon as you have passed upon the plans. I believe that the American Bridge Company is the best concern to deal with in this matter, but I beg you not to pay any attention to my suggestion, if you think otherwise.

The Bethlehem Steel Company will furnish me the sheets, but I cannot give the order until we have agreed upon all details.

My Dear Stanford:
Many thanks for your suggestions. I am writing to Mr. Powell today. Perhaps he will be able to clear the land altogether.

I want you to understand that I went to the American Bridge Company simply because of my anxiety to have the work pushed through as fast as practicable. I am only too glad to follow your advice and beg you to consider yourself absolutely free in your choice and arrangements regarding this work.

Gentlemen:
Under enclosure I forward sketch showing your two boilers as they will be placed in my building and their position relative to and exact distance from the chimney. The scale is ½ inch to a foot.

You will greatly oblige me by furnishing the drawings of the flues leading to the chimney and the position of the breech, as the builder cannot proceed without this information.

Anyone familiar with the Wardenclyffe Tower knows it to have been a colossal structure. Yet, few realize that it was supposed to have been even larger. Although the exact figures are not revealed, Tesla must have drastically underestimated the cost of building his structure as is evidenced by the following response to White.

My Dear Stanford:
I have not been half as dumbfounded by the news of the shooting of the President as I have by the estimates submitted to you, which, together with your kind letter of yesterday, I received last night.

One thing is certain: We cannot build that tower as outlined.

I cannot tell you how sorry I am, for my calculations show, that with such a structure I could reach across the Pacific. Since last night, I have thought carefully over the matter and have come to the conclusion that the best plan will be to fall back on an older design which I have made, involving the use of two and possibly three towers, but much smaller. We would keep the design of the tower the same and would only reduce the dimensions. It will probably be best to adopt a design with two towers and a low centraI part for the machinery. I shall make some calculations today and will see how far I can reduce the height without impairing materially the efficiency of the apparatus, and will communicate with you as soon as practicable.

Thanking you heartily for your friendly interest and efforts on my behalf, I remain, 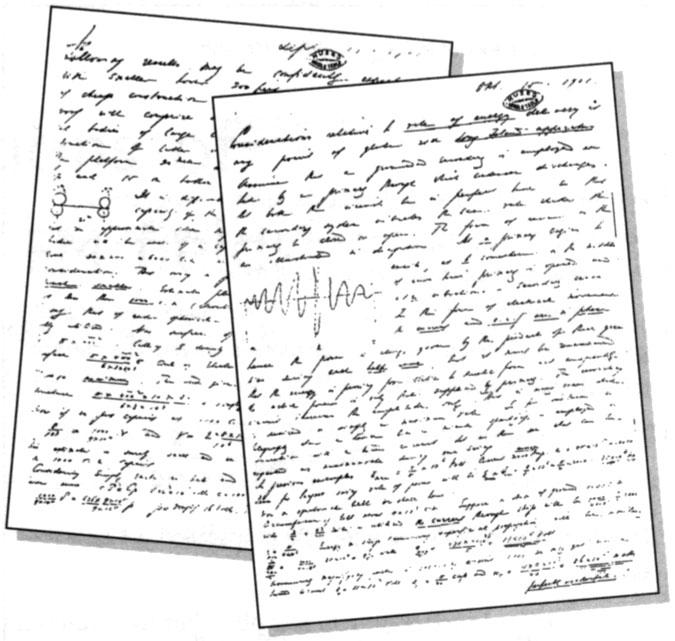 In less than a week after receiving news of the exorbitant construction bids, Tesla had a new design, but he could only provide a rough estimate of what its capacitance would be. (Figs. 5-8 show somewhat the conceptual evolution of the electrical apparatus which was to build a capacitance sufficiently large to power the globe via earth resonance.)

Sept 18, 1901
Following results may be confidently expected with smaller tower 200 feet and terminal roof of cheap construction as last designed. The roof will comprise a single platform with spherical bodies of large curvature on rim.

The construction of latter will be given in detail. The platform 20 meters diameter, 15 round surfaces on top and 15 on the bottom as shown in sketch below.

It is difficult to estimate in advance the capacity of the structure with precision, but an approximate idea may be obtained. The spherical bodies will be each of a capacity of 200 cm. This would give 30 x 200 = 6000 cm without taking elevation into consideration. But owing to proximity capacity will be much smaller. Estimates place the minimum value at or less than 1000 cm (elevation not considered). This means, say, that of each spherical body only 1/6 of surface is fully active.

Now, surface of one spherical body will be π x 4002.Calling σ density, we would have on 1/6 of surface

We can safely make σ 10 minimum. This would give on the whole structure 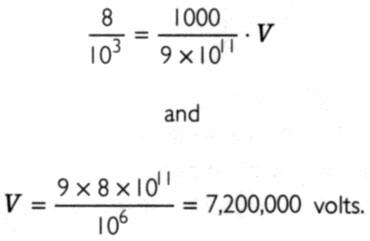 Decipherer's Notes
Again, the decipherer's proofreader took issue. Using 636 x 106 cm as the value for earth's capacitance, he arrived at the conclusion that p should equal 11 and not 16 volts.

By October, Tesla was quite pleased with his projections for the new tower's output. The decipherer's proofreader had no objections, either.

Oct. 15, 1901
Consideration relative to rate of energy delivery at any point of globe with Long Island apparatus.

Assume that a grounded secondary is employed excited by a primary through which condenser discharges and let both the circuits be in perfect tune so that the secondary system vibrates the same rate whether the primary be closed or open. The form of wave is then as illustrated in diagram. [See Fig. 9.] At a primary begins to excite, at b somewhere in the middle of wave train primary is opened and at c vibrations in secondary cease.

In this form of electrical movement the current and emf are in phase, hence the power is always given by the product of these quantities during each half wave, but it must be remembered that the energy is passing from static to kinetic form and consequently the actual power is only that supplied by primary. The secondary circuit increases the amplitude only. But in many cases what is desired is simply a maximum rate. So for instance in telegraphy when a device like a minute spark gap is employed in connection with a tuned circuit. Let us then see what can be expected as reasonable during one swing.

Energy in strip considering superficial propagation will be similarly 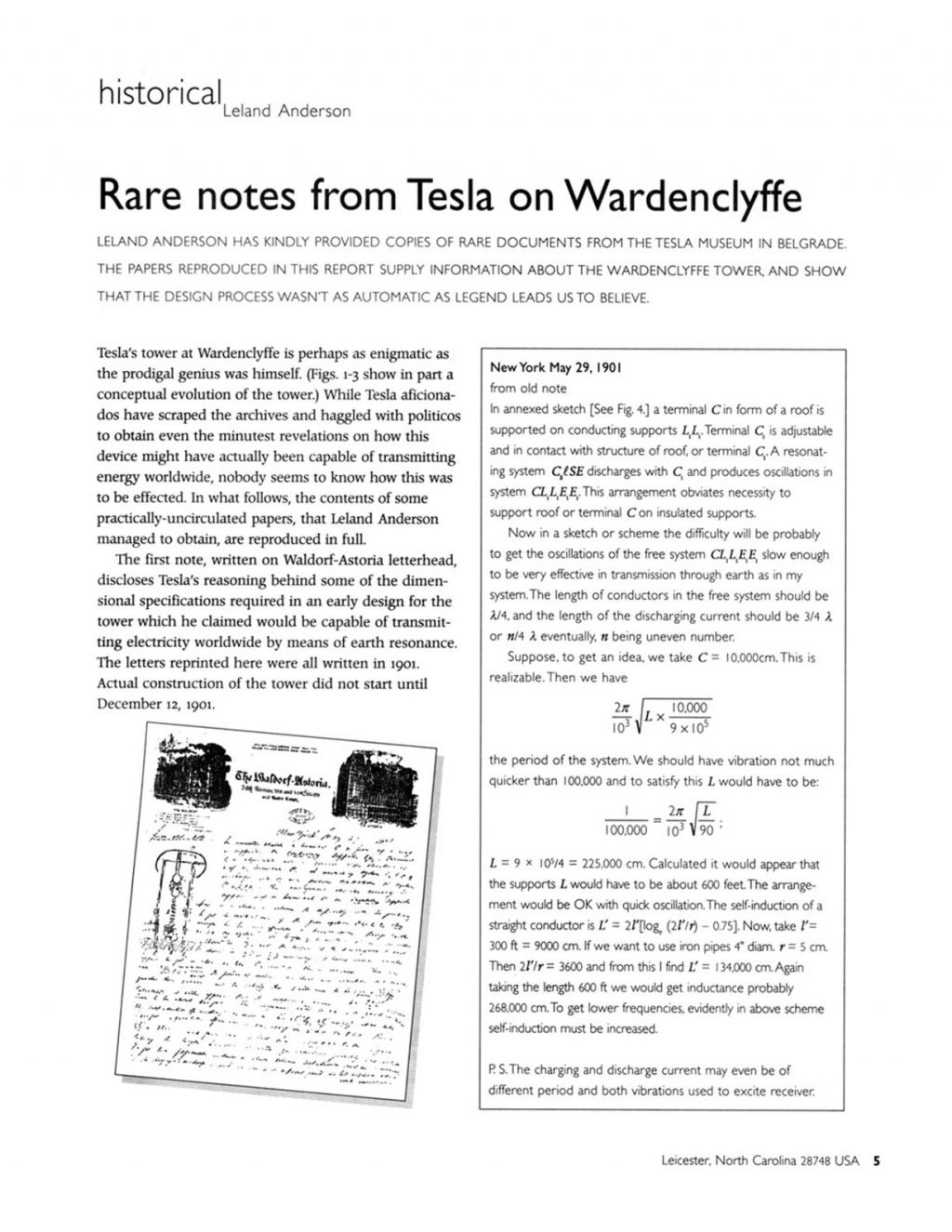