He Holds Steam Can Be Made Economically by Using Different Temperatures of Ocean.

Both Embody Improvements in Wollaston's Toy, Says Scientist — Tests to Be Made Soon.

Designs of two new power plants, one to utilize the heat below the surface of the earth, the other to take advantage of the difference in temperature between upper and lower levels of the ocean, pre announced by Dr. Nikola Tesla, the inventor, in an article in the December issue of Everyday Science and Mechanics, out tomorrow.

While many attempts have been made in the past fifty years to devise ways to utilize the heat energy of the ocean and the interior of the earth, Dr. Tesla said his designs embodied improvements which would make it possible to supply power from ocean and terrestrial sources on an economical basis in competition with other sources of power.

Only last year Professor Georges Claude of Paris constructed at Matanzas Bay, Cuba, an experimental plant for the purpose of harnessing the temperature differences in the tropical seas for power purposes. Several engineers, Dr. Tesla among them, are of the opinion, however, that the Claude plant, while workable, is too expensive to produce power on an economical basis. Dr. Tesla said his own designs do away with the most expensive and objectionable features of former experiments.

“It is well known,” Dr. Tesla writes, “that there exists, in tropical seas, a difference of 50 degrees Fahrenheit between the surface water and that three miles below. The temperature of the former, being subject to variations, averages 82 Fahrenheit, while that of the latter is normally at least 32 degrees Fahrenheit, or nearly so, as the result of the slow influx of the ice-cold polar stream.

“In solid land these relations are reversed, the temperature increasing about one degree Fahrenheit for every sixty-four feet of descent. But while all this was of common knowledge for at least seventy-five years and the utilization of the heat of the earth for power purposes a subject of speculation, no decided attempt to this end seems to have been made until an American engineer, whose name I have been unable to ascertain, proposed to operate engines by steam generated in high vacuum from the warm surface water and condensed by the cold water pumped from a great depth. A fully and carefully worked out plan of this kind, supported by figures and estimates, was submitted by him to prominent capitalists and business men of New York about fifty years ago.”

Water can be made to boil at temperatures much below the normal boiling point of 212 degrees Fahrenheit by subjecting it to a vacuum which causes ebullition at any temperature, however low.

“This behavior of water, or liquids in general,” says Dr. Tesla, “was long before beautifully exemplified in the classical device called ‘cryophoros,’ consisting of two communicating and exhausted bulbs partially filled with liquid, which is evaporated in one and condensed in the other. It was invented by W. H. Wollaston, a great English scientific man and investigator (1766-1828), who first commercialized platinum, and was credited by some to have anticipated Faraday in the discovery of electromagnetic rotation.

“The original instrument brought out at the beginning of the nineteenth century had one of the bulbs packaged in ice with the result of freezing water in the other. In conformity with the views of that time it was thought that the cold of the ice was carried to the water, and so the Greek name, meaning ‘cold-carrier,’ was given to the device. But now we know that the process is of opposite character, the freezing being brought about by the transport of the latent heat of evaporation from the warm to the cold bulb. One would naturally infer that the operation would cease as soon as the water is frozen at the surface, but curiously enough the ice itself continues to yield steam, and it is only because of this that all of the water is solidified.”

A Toy on a Huge Scale.

The ocean plant originally proposed by the French engineer, Professor Claude, and Dr. Tesla is no more than Wollaston's scientific toy on a huge scale, Dr. Tesla points out, adapted for continuous operation and having an engine interposed between the two communicating vessels.

The principal parts of Dr. Tesla's designs consist of a vacuum pump, a turbine, a condenser and a generator. The plan for the ocean plant has as one of the novel features a tunnel dug to the level of the cold waters, which in the design for the terrestrial plant is substituted by a heat-insulated shaft, extending a mile or less below the surface.

The vacuum pump starts the sea water boiling at surface temperature. The steam thus generated is directed against the turbine, which it turns, and passes on to the condenser. By an ingenious arrangement the cold water from the depths is made to come to the surface through the tunnel and to the condenser, thus condensing the steam exhausted by the turbine. The turbine is connected with the shaft of a generator, in this manner transforming heat energy into mechanical and electrical energy.

In the terrestrial power plant water is circulated to the bottom of the shaft, returning as steam to drive the turbine, and then returned to liquid form in the condenser, in an unending cycle.

Asked what constituted the chief improvements in his designs over those of his predecessors, Dr. Tesla said:

“First of all, I do away with the necessity of lifting the water, which has heretofore involved the expenditure of a very large portion of the power developed, I attain this by submerging the two elements of the plant, the boiler and the condenser, so that the work to be performed is only that of circulation, notwithstanding the changing level of the ocean owing to ebb and tide. The quantity of water necessary is so enormous that it cannot be supplied with sufficient economy by centrifugal pumps, which had been heretofore proposed.

“The second improvement consists in employing screw propellers which, being rotated in solid water, can operate with an efficiency of 87 percent. Thirdly, I do away with pipelines, which are limited in size and are otherwise objectionable, and bring the cold water up from the depths through a tunnel which is permanent and reduces greatly resistance to flow.

“A fourth improvement is the adoption of a form of apparatus which lends itself to very large units, 100,000 or 200,000 horsepower if desired, and thus effect all those savings which are secured in this manner, and with which power engineers are thoroughly familiar.

“In embodying these improvements in my system I also dispense with other drawbacks and difficulties, such as degasification of the water and the excessive moisture in the steam. I may mention, furthermore, that I secure a perfect automatic control of the power without the usual complex appliances, by placing the condenser a little higher than the boiler, so that the condensate flows into the latter automatically through a pipe connection, without the employment of a pump.

“Yet even with all these economies the power obtainable is still too dear under the present, exceptionally low prices of oil. However, a plant embodying all these improvements can, I believe, successfully compete with fuel under normal conditions. It must be borne in mind, however, that the ocean power plant is not perfectly constant in its performance as there are seasonal and also casual variations.

“For these, and other reasons, the utilization of terrestrial heat on solid land is very superior. After thirty years I have developed a plan which enables me to derive by means of a shaft of given depth many times the amount of power obtainable according to plans heretofore proposed either by myself or others, including Sir Charles Parsons.

“Instead of placing the boiler at the bottom of the shaft, and so limiting the influx of heat, I utilize the heat flowing into the whole shaft, which is many times greater, of course, to generate steam. The arrangement is of ideal simplicity. The steam is drawn from the bottom of the shaft through a heavily insulated pipe to a turbine on level ground. From the turbine the steam is discharged into the condenser and the condensed water flows by gravity through another insulated pipe reaching to a depth at which the temperature of the ground exceeds that of the condensate.

“By circulating the steam in great volume through the turbine and condenser I am able to maintain a considerable temperature difference between the ground and the interior of the shaft, so that a very great quantity of heat flows into the same continually, to be transformed into mechanical work. The only requisite is a sufficient volume of condensing water, and this problem is the more easily satisfied the colder the climate.

“With my improved method it is practicable to supply all the power which a small community may require from a shaft of moderate depth, certainly less than a mile. And for isolated dwellings a few hundred feet depth would be ample, particularly if such a fluid as ether is employed for running the turbine.

“The power obtained by this method is ideal on account of its perfect constancy and the elementary simplicity of the whole plant. I have been for some time engaged in making estimates of costs of installation, and I find that it would not be prohibitive by comparison with other sources of power.”

Dr. Tesla made it clear that neither of the two proposed power plants has anything to do with the work he is conducting on a new source of power, about which he told The New York Times on the occasion of his seventy-fifth birthday, July 10, 1931. He confessed rather reluctantly that he is taking steps for making practical tests for both the terrestrial and ocean power plants in the near future. 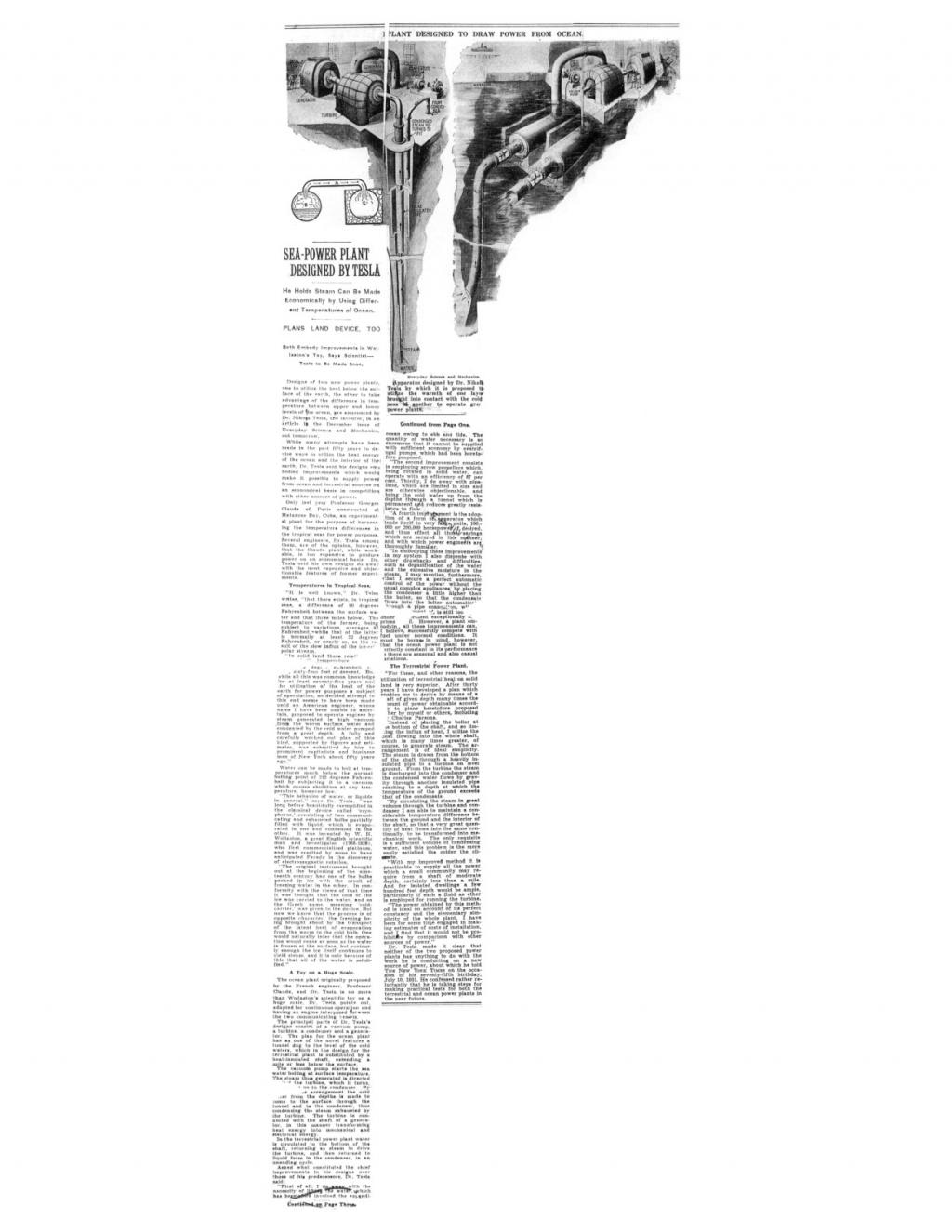