(Nikola Tesla, dean of inventors at 76 and pioneer of radio, believes it is essential for the welfare of the country that prohibition end soon. In this article, which he wrote for the World-Telegram, he expresses somewhat unusual arguments against it.)

Much has been said about prohibition and its disastrous consequences, but the sheer folly and perniciousness of this measure cannot be fully appreciated until it is considered from the scientific point of view. It then appears not only unsound in principle but utterly devoid of validity.

Chiefly as a result of dry propaganda people have been led to believe that alcoholic beverages cause serious injuries to mind and body, while other stimulants, as tea and coffee, are almost harmless. I know from careful observation and lifelong experience that the reverse is more nearly true.

Beginning with the enactment of the Volstead law I have been a moderate consumer of alcohol and it never hurt me in the least. On the contrary it helped me many times effectively over the peak of the effort.

It is in striking contrast in its medicinal and dietetic value to all other stimulants which, without exception, are injurious. Even smoking, snuffing or chewing tobacco will eventually impair the health, though not quite so much as chewing gum, which, by exhaustion of the salivary glands, puts many a foolish victim into an early grave.

But by far the greatest number of victims are claimed by tea and coffee. Dr. Alexander Haig, foremost authority on uric acid and founder of his famous diet, says of the former: - “Tea drinking is just like drug taking, in fact, and has just as terrible and fatal results.”

Women, in particular, should shun tea as it is a means of committing beauty suicide. In this respect coffee is the very opposite, imparting sometimes to the face a fascinating aristocratic pallor.

I have read books and articles depicting the horrible effect of alcohol on human beings, but always found that the few individuals under observations were either hopeless drunkards or had been weakened by heredity and environment. Obviously every form of excess is injurious. Such an investigation, to be of value, should be limited to moderate drinkers who number in legions and experience no ill effects. They are, as a rule, long lived and considered by life insurance companies the safest policy holders.

Alcohol is not a poison, nor is it a drug. It is not classed as a poison in books on chemistry.

The truth about alcohol is that it acts as a caustic and a solvent. In small quantities it cleans and sterilizes the alimentary channels, thereby preventing infections, and proves a beneficial stimulant to thought, speech and physical exertion.

Alcohol is produced in the normal chemical reactions of the stomach and can be found in every part of the body, even in the brain of a total abstainer.

It is formed, not as a toxic inimical to life, but as a substance indispensable to vital processes.

To illustrate prohibition's utter folly and danger it is only necessary to point out that a sudden change of diet or the omission of an essential element, especially in advanced years, may induce high blood pressures, cause malnutrition or otherwise imperil life. When the Volstead act became a law I realized that, accustomed as I was to alcohol, it would be very difficult for me to break off. Only a few days of abstinence made me a very sick man and my health became precarious. Finally, after several months of suffering, little by little I gained and ever since have been a total abstainer.

If an attempt is made to enforce such a law as prohibition and thereby subject a citizen to suffering, danger and possible loss of life he or his relatives should be entitled to substantial reparation and these suits once begun would soon exhaust the treasury.

The Volstead act put the country into panic and unprecedented distress. This is but an unavoidable result of depriving the nation of a revenue of about $200,000,000 a year and compelling it besides to pay to bootleggers nearly twice that sum annually. The tyrannical rule is killing business in some of its most important departments. The hotels and similar institutions are being rapidly forced to the wall.

I remember that in Austria a law compelled every community to keep fires going in the streets during an epidemic of cholera.

In the seventies when I myself contracted the disease all the streets of the city were filled with smoke and stench. Nevertheless the inhabitants died in heaps. Prohibition affords a parallel case. It was passed by legislators unacquainted with vital facts of life out of their own sphere. In imposing this measure the legislative bodies have evidently exceeded their authority. Under such circumstance I fail to see why a repeal should be required. Nothing more need be done than to forget the law and so permit it to pass to a state of innocuous desuetude. 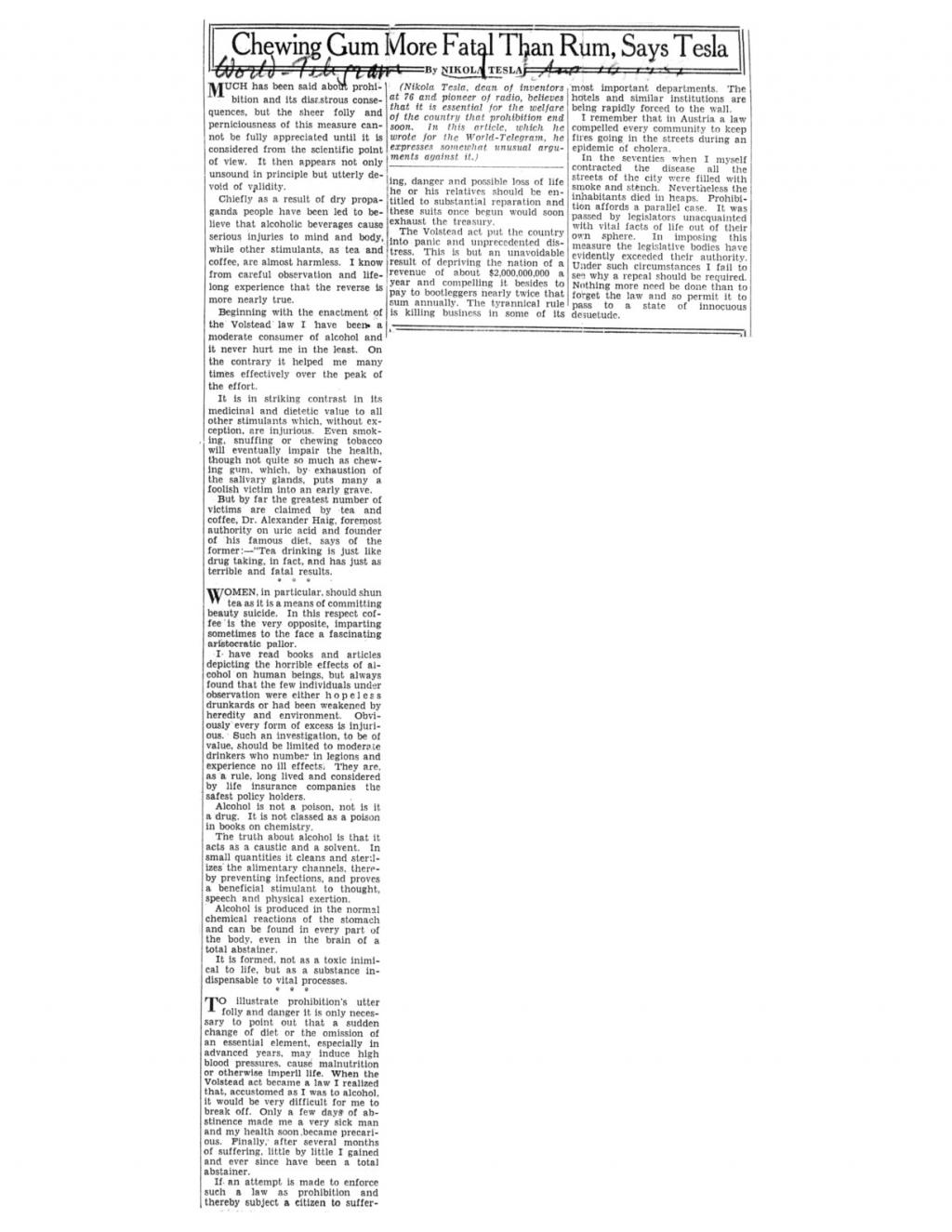