Signals to Mars Based on Hope of Life on Planet

Written Specially for the Herald by Nikola Tesla

The idea that other planets are inhabited by intelligent beings might be traced to the very beginnings of civilization. This, in itself, would have little significance, for many of the ancient beliefs had their origin in ignorance, fear or other motives — good or evil, and were nothing more than products of untrained or tortured imagination. But when a conception lives through ages in the minds, growing stronger and stronger with increasing knowledge and intellectual development, it may be safely concluded that there is a solid truth underlying the instinctive perception. The individual is short lived and erring; man, relatively speaking, is imperishable and infallible. Even the positive evidences of the sense and the conclusions of science must be hesitatingly accepted when they are directed against the testimony of the entire body of humanity and the experience of centuries.

Modern investigation has disclosed the fact that there are other worlds, situated much the same as ours, and that organic life is bound to develop wherever there is heat, light and moisture. We know now that such conditions exist on innumerable heavenly bodies. In the solar system, two of these are particularly conspicuous — Venus and Mars. The former is, in many respects like the earth and must undoubtedly be the abode of some kind of life, but as to this we can only conjecture, for the surface is hidden from our view by a dense atmosphere. The latter planet can be readily observed and its periodic changes, which have been exhaustively studied by the late Percival Lowell, are a strong argument in support of the supposition that it is populated by a race vastly superior to ours in the mastery of the forces of nature

If such be the case then all that we can accomplish on this globe is of trifling importance as compared with the perfection of means putting us in possession of the secrets they must have discovered in their struggle against merciless elements. What a tragedy it would be were we to find some day that this wonderful people had finally met its inevitable fate and that all the precious intelligence they might have and, perhaps, had tried to convey to us, was lost. But although scientific research during the last few decades has given substance to the traditional belief, no serious attempt to establish communication could have been made until quite recently for want of proper instrumentalities.

Long ago it was proposed to employ rays of light for this purpose and a number of men of science had devised specific plans which were discussed in the periodicals from time to time. But a careful examination shows that none of them is feasible, even on the assumption that the interplanetary space is devoid of gross matter, being filled only with a homogeneous and inconceivably tenuous medium called the ether. The tails of comets and other phenomena, however, would seem to disprove the theory, so that the successful exchange of signals by that kind of agency is very improbable.

While we can clearly discern the surface of Mars, it does not follow that the reverse is true. In perfect vacuum, of course, a parallel beam of light would be ideally suited for the transmission of energy in any amount for, theoretically, it could pass through infinite distance without any diminution of intensity. Unfortunately, this as well as other forms of radiant energy are rapidly absorbed in traversing the atmosphere.

It is possible that a magnetic force might be produced on the earth sufficient to bridge the gap of 50,000,000 miles and, in fact, it has been suggested to lay a cable around the globe with the object of magnetizing it. But certain electrical observations I made in studying terrestrial disturbances prove conclusively that there can not be much iron or other magnetic bodies in the earth beyond the insignificant quantity in the crust. Everything indicates that it is virtually a ball of glass and it would require many energizing turns to produce perceptible effects at great distance in this manner. Moreover, such an undertaking would be costly and, on account of the low speed of the current through the cable, the signalling would be extremely slow.

Such was the state of things until twenty years ago when a way was found to perform this miracle. It calls for nothing more than a determined effort and a feat in electrical engineering which, although difficult, is certainly realizable.

In 1899 I undertook to develop a powerful wireless transmitter and to ascertain the mode in which the waves were propagated through the earth. This was indispensable in order to apply my system intelligently for commercial purposes and, after careful study, I selected the high plateau of Colorado (6,000 feet above sea level) for the plant which I erected in the first part of that year. My success in overcoming the technical difficulties was greater than I had expected and in a few months I was able to produce electrical actions comparable to, and in a certain sense surpassing those of lightning. Activities of 18,000,000 horsepower were readily attained and I frequently computed the intensity of the effect in remote localities. During my experiments there, Mars was at a relatively small distance from us and, in that dry and rarefied air, Venus appeared so large and bright that it might have been mistaken for one of those military signaling lights. Its observation prompted me to calculate the energy transmitted by a powerful oscillator at 50,000,000 miles, and I came to the conclusion that it was sufficient to exert a noticeable influence on a delicate receiver of the kind I was, in the meanwhile, perfecting.

My first announcements to this effect were received with incredulity but merely because the potencies of the instrument I had devised were unknown. In the succeeding year, however, I designed a machine for a maximum activity of 1,000,000,000 horsepower which was partly constructed on Long Island in 1902 and would have been put in operation but for reverses and the fact that my project was too far in advance of the time.

It was reported at that period that my tower was intended for signalling to Mars, which was not the case, but it is true that I made a special provision for rendering it suitable to experiments in that direction. For the last few years there has been such a wide application of my wireless transmitter that experts have become, to an extent, familiar with its possibilities, and, if I am not mistaken, there are very few “doubting Thomases” now. But our ability to convey a signal across the gulf separating us from our neighboring planets would be of no avail if they are dead and barren or inhabited by races still undeveloped. Our hope that it might be different rests on what the telescope has revealed, but not on this alone.

In the course of my investigations of terrestrial electrical disturbances in Colorado I employed a receiver, the sensitiveness of which is virtually unlimited. It is generally believed that the so-called audion excels all others in this respect and Sir Oliver Lodge is credited with saying that it has been the means of achieving wireless telephony and transforming atomic energy. If the news is correct that scientist must have been victimized by some playful spirits with whom he is communicating. Of course, there is no conversion of atomic energy in such a bulb and many devices are known which can be used in the art with success.

My arrangements enable me to make a number of discoveries, some of which I have already announced in technical periodicals. The conditions under which I operated were very favorable for no other wireless plant of any considerable power existed and the effects I observed were thereafter due to natural causes, terrestrial or cosmic. I gradually learned how to distinguish in my receiver and eliminate certain actions and on one of these occasions my ear barely caught signals coming in regular succession which could not have been produced on the earth, caused by any solar or lunar action or by the influence of Venus, and the possibility that they might have come from Mars flashed upon my mind. In later years I have bitterly regretted that I yielded to the excitement of ideas and pressure of business instead of concentrating all my energies on that investigation.

The time is ripe now to make a systematic study of this transcending problem, the consummation of which may mean untold blessings to the human race. Capital should be liberally provided and a body of competent experts formed to examine all the plans proposed and to assist in carrying out the best. The mere initiation of such a project in these uncertain and revolutionary times would result in a benefit which cannot be underestimated. In my early proposals I have advocated the application of fundamental mathematical principles for reaching the first elementary understanding. But since that time I have devised a plan akin to picture transmission through which knowledge of form could be conveyed and the barriers to the mutual exchange of ideas largely removed.

Perfect success cannot be attained in any other way for we know only what we can visualize. Without perception of form there is not precise knowledge. A number of types of apparatus have been already invented with which transmission of pictures has been effected through the medium of wires, and they can be operated with equal facility by the wireless method. Some of these are of primitively simple construction. They are based on the employment of like parts which move in synchronism and transmit in this manner records, however complex. It would not require an extraordinary effort of the minds to hit upon this plan and devise instruments on this or similar principles and by gradual trials finally arrive at a full understanding.

The Herald of Sept. 24 contains a dispatch announcing that Prof. David Todd, of Amhurst College, contemplates an attempt to communicate with the inhabitants of Mars. The idea is to rise in a balloon to a height of about 50,000 feet with the manifest purpose of overcoming the impediments of the dense air stratum. I do not wish to comment adversely upon this undertaking beyond saying that no material advantage will be obtained by this method, for what is gained by height is offset a thousandfold by the inability of using powerful and complex transmitting and receiving apparatus. The physical stress and danger confronting the navigator at such an altitude are very great and he would be likely to lose his life or be permanently injured. In their recent record flights Roelfs and Schroeder have found that at a height of about six miles all their force was virtually exhausted. It would not have taken much more to terminate their careers fatally. If Prof. Todd wants to brave these perils he will have to provide special means of protection and these will be an obstacle to his observations. It is more likely, however, that he merely desires to look at the planet through a telescope in the hope of discerning something new. But it is by no means certain this instrument will be efficient under such conditions. 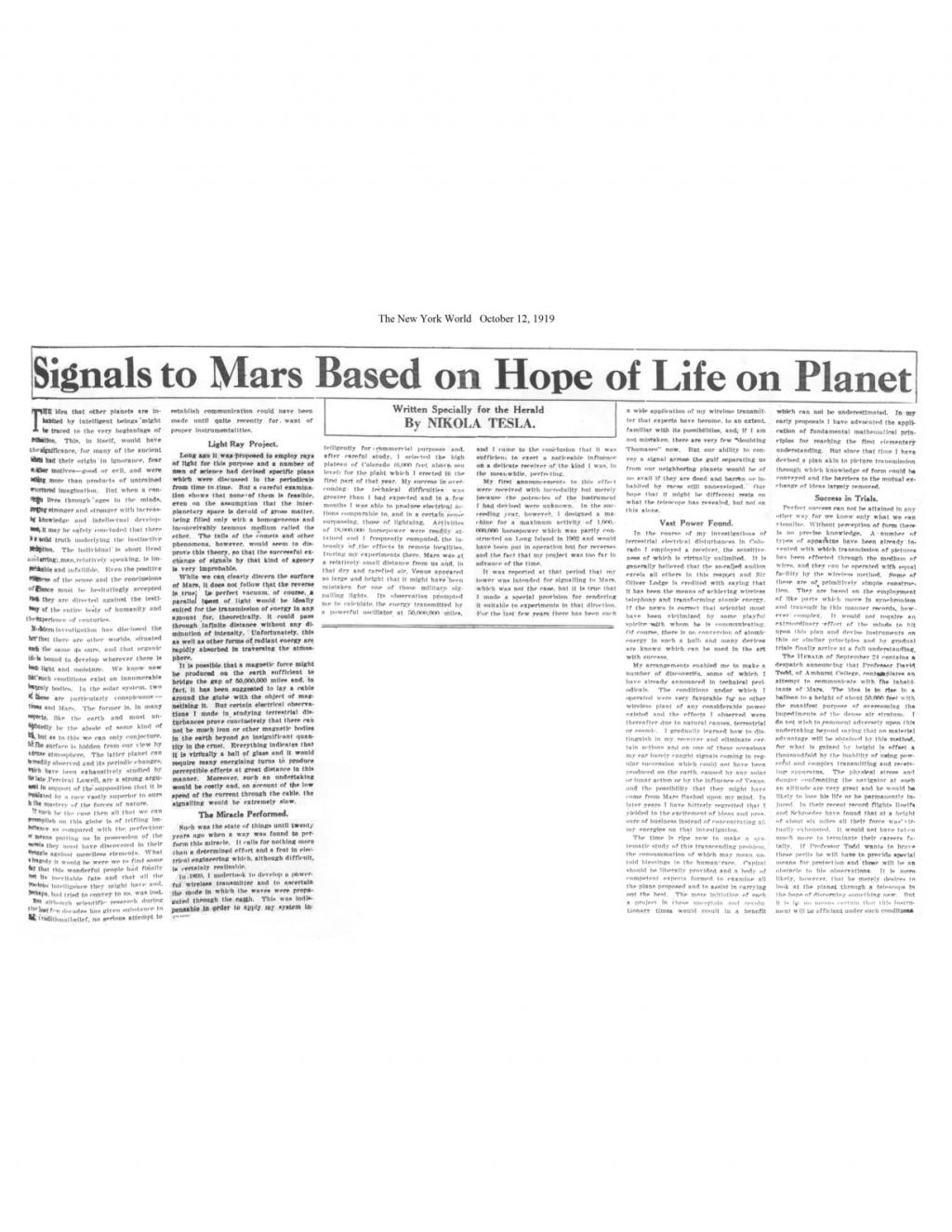