Tesla Answers Mr. Manierre and Further Explains the Axial Rotation of the Moon

Tesla answers Mr. Manierre and further explains the axial rotation of the moon.

In your article of February 2, Mr. Charles E. Manierre, commenting upon my article in The Electrical Experimenter for February, which appeared in The Tribune of January 26, suggests that I give a definition of axial rotation.

I intended to be explicit on this point, as may be judged from the following quotation: “The unfailing test of the spinning of a mass is, however, the existence of energy of motion. The moon is not possessed of such vis viva.” By this I meant that “axial rotation” is not simply “rotation upon an axis” as nonchalantly defined in dictionaries, but is circular motion in the true physical sense — that is, one in which half the product of the mass with the square of velocity is a definite and positive quantity.

In astronomical treatises usually the argument is advanced that “if the lunar globe did not turn upon its axis it would expose all parts to terrestrial view. As only a little over one-half is visible it must rotate.” But this inference is erroneous, for it admits of one alternative. There are an infinite number of axes besides its own on each of which the moon might turn and still exhibit the same peculiarity.

I have stated in my article that the moon rotates about an axis, passing through the centre of the earth, which is not strictly true, but does not vitiate the conclusions I have drawn. It is well known, of course, that the two bodies revolve around a common centre of gravity which is at a distance of a little over 2,899 miles from the earth’s centre.

Another mistake in books on astronomy is made in considering this motion equivalent to that of a weight whirled on a string or in a sling. In the first place, there is an essential difference between these two devices though involving the same mechanical principle. If a metal ball attached to a string is whirled around and the latter breaks an axial rotation of the missile results which is definitely related in magnitude and direction to the motion preceding. By way of illustration: If the ball is whirled on the string clockwise, ten times a second, then when it flies off it will rotate on its axis twenty times a second, likewise in the direction of the clock. Quite different are the conditions when the ball is thrown from a sling. In this case a much more rapid rotation is imparted to it in the opposite sense. There is not true analogy to these in the motion of the moon. If the gravitational string, as it were, would snap, the satellite would go off in a tangent without the slightest swerving or rotation, for there is no momentum about the axis and, consequently, no tendency whatever to spinning motion.

Mr. Manierre is mistaken in his surmise as to what would happen if the earth were suddenly eliminated. Let us suppose that this would occur at the instant when the moon is in opposition. Then it would continue on its elliptical path around the sun, presenting to it steadily the face which was always exposed to the earth. If, on the other hand, the latter would disappear at the moment of conjunction, the moon would gradually swing around through 180 degrees and, after a number of oscillations, revolve again with the same face to the sun. In either case there would be no periodic changes, but eternal day and night, respectively, on the sides turned toward and away from the luminary. 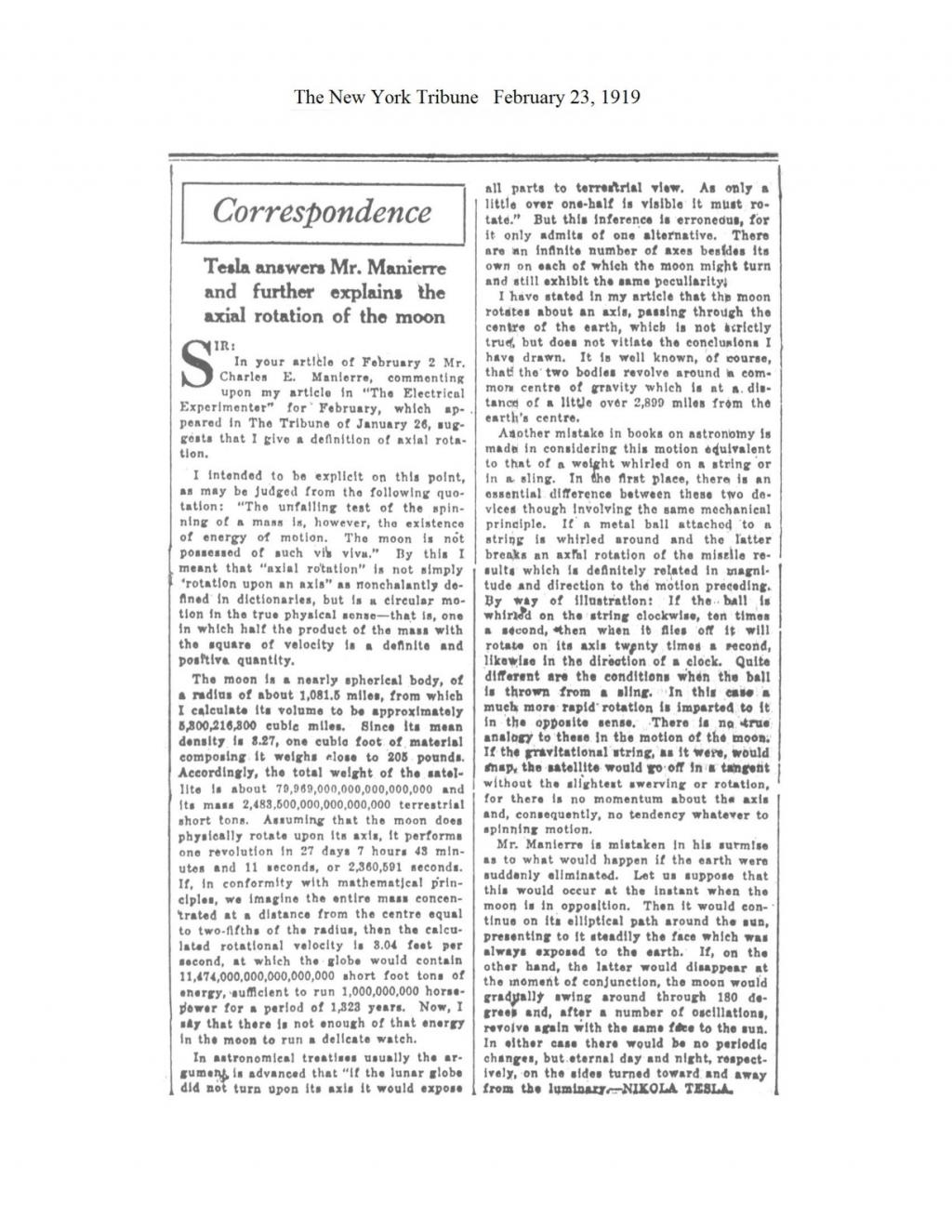