A Talk by Nikola Tesla

He Delivers an Interesting Lecture to Electrical Engineers.

The Electrical Engineer of this week will contain an interesting account of the session of the American Institute of Electrical Engineers held at Columbia College last Wednesday evening, at which some really wonderful experiments were shown by Nikola Tesla, the recognized leading expert on alternating currents. For these experiments Mr. Tesla used an alternating machine with 400 poles, which when run at full speed permitted him to obtain 20,000 alternations per second. The currents were first run through a condenser. The machine was set up in the electrical workshop of the college and was driven by an electric motor, the speed of which could be regulated from the platform.

Mr. Tesla, at the beginning of his lecture, said that modern science had been able to make rapid strides by the recognition of ether as the medium of transmission of vibrations of various forms. The answer to the question, "What is electricity?" could not yet be given, but the assumption was justifiable that electric phenomena were ether phenomena, and the phenomena of static electricity could be considered as the phenomena of ether under strain, and those of dynamic and electro-magnetism as phenomena of ether in motion.

Alluding to the electro-magnetic theory of light, Mr. Tesla said that he considered the electro-magnetic waves as unavailable for the production of luminous effects, for the reason that long before the necessary frequency could be reached, the conductor would become opaque to the passage of the waves. Electro-magnetic waves, unless they had the frequency of true light waves, he thought could not produce luminous effects. The electrostatic waves, or thrusts, however, no matter what their frequency, could excite luminous radiation. The static effects in the Hertz and Lodge experiments were excessively small, owing to the fact that they were produced in a practically closed coil, the potential being depressed. To obtain the desired difference of potential, there must be an open circuit generator of high potential and of high frequency to enhance the electrostatic effects.

In carrying out the idea of obtaining enormous differences of potential Mr. Tesla met the difficulty of obtaining the requisite insulation for the induction coil. His experience demonstrated that what are generally considered the best insulators, as glass and rubber, are inferior to others not so considered, as oil and wax. He started the spark coil in action, the primary of which was in connection with his alternator, speeded at about 10,000 alternations per second. As the discharges took place between the terminals of the coil an exhausted Geissler tube held near the discharge did not light, but on blowing out the arc the tube lighted up, this being due to the rise of the potential caused by the rupture of the arc. This effect Mr. Tesla considered purely electrostatic.

To still further verify his conclusions that electrostatic effects alone are active, Mr. Tesla placed a Geissler tube at right angles to the coil and at its centre. It did not light up, but when placed at the ends gave sufficient light to read by. He afterward adjusted conditions so that by touching one terminal with a brass sphere he raised the potential of the coil so enormously that a stream of light came out on the other terminal.

He estimated the difference of potential to be nearly 250,000 volts, and then received the total discharge in his body, protecting his hands from burning by bolding brass balls. 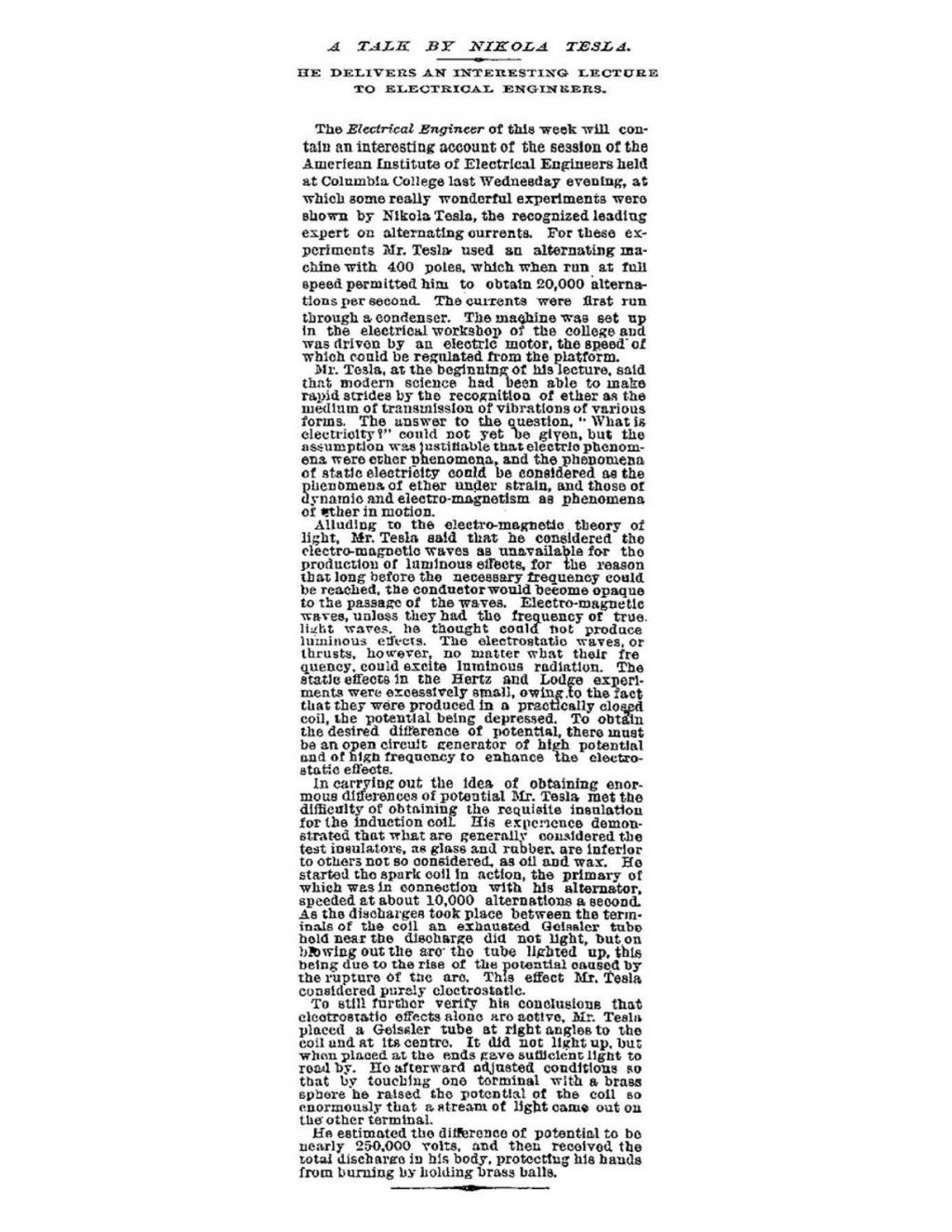