The locals must have thought a madman had come to their town. Nikola Tesla was a gaunt and towering 6 foot 2 when he stepped off the train at Colorado Springs, Colo., on May 18, 1899. He was dressed stylishly, causing him to stand out in the rural community. But it was his penetrating gray eyes that gave people pause; they had a disturbing effect on people. They had originally been dark but became increasingly lighter, he claimed, the more he used his brain. 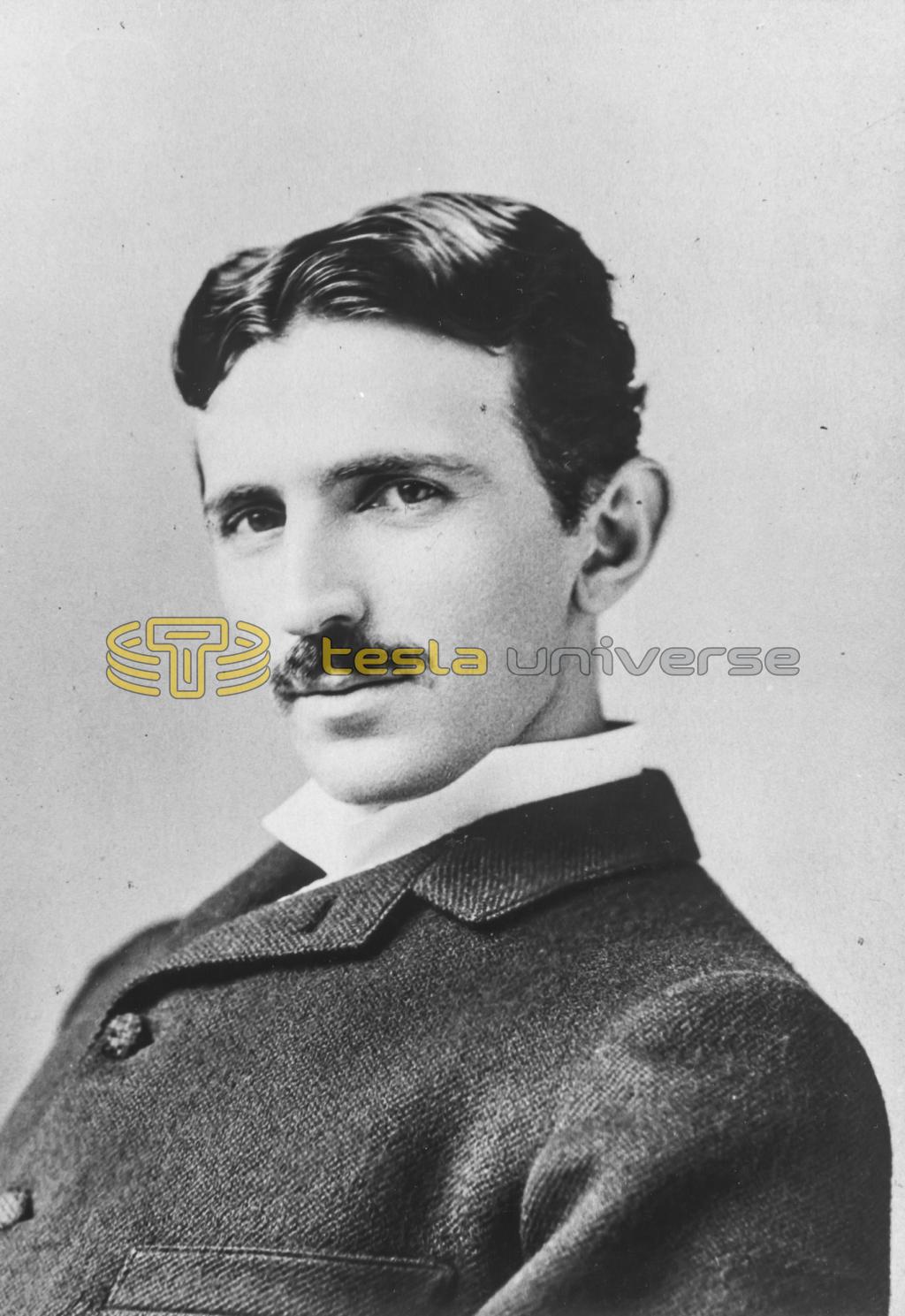 Tesla was a scientist who had already won national acclaim for his Alternating Current induction motor (known as the Tesla Coil) and his early experiments with X-rays and radio waves, which included a radio-controlled boat critics claimed (falsely) was operated by a trained monkey hidden inside. Now, in the frontier Rocky Mountain state, he had found a place to conduct experiments away from prying eyes.

Tesla was born on July 10, 1856 in the Croatian village of Smiljan to Serbian parents. Family members assumed Tesla, the son of an Orthodox priest, would enter the clergy and follow in his father's footsteps. Instead, after finishing secondary school a year ahead of schedule, he went to Austrian Polytechnic. But he gambled away both his tuition and allowance and dropped out, never to graduate from Polytechnic or any other university.

In 1881 he began working for the Budapest Central Telephone Exchange. The following year he joined Continental Edison Company in Paris, before deciding to immigrate to America in 1884. During the voyage, his ticket, money and part of his luggage were stolen, and he almost was thrown overboard during a mutiny. When he stepped off the ship onto American soil he had only 4 cents.

Fortunately, he still possessed a recommendation letter from a former Edison employee, Charles Batchelor. “I know two great men and you are one of them; the other is this young man,” Batchelor had written. The letter was addressed to Thomas Edison.

The famous American inventor hired Tesla, who after a year offered to redesign Edison's ineffective electrical motors and generators. Edison told him he would give him $50,000 if he could pull off the engineering feat. When Tesla did so, however, Edison refused to pay the promised reward, telling his employee he did not understand American humor. Tesla quit in a rage and set out to create his own company. Instead, he found himself digging ditches, earning $2 a day.

In 1888 Tesla secured financing from investors and set up a lab where he built the world's first practical AC motor (a motor driven by an alternating current). Hearing this, American entrepreneur George Westinghouse bought the licensing rights and hired Tesla for $2,000 a month, an amazing sum at the time. When Westinghouse won the contract to light the 1893 World's Columbian Exposition in Chicago, it was Tesla who unveiled the utility and practicality of AC electrical currents. But AC was also the source of a long feud pitting Tesla and Westinghouse against the inventor's former boss, Edison, who felt his Direct Current (DC) system was better, safer and more practical. Their battle became known as the War of the Currents, and in the end, AC ruled.

The next year Tesla began experimenting with X-rays, stumbling across the technology by accident. In 1895, he took several X-rays of Mark Twain. But it was his experiments in Colorado Springs that caused his legend to grow.

Tesla had been enticed to the city by patent lawyer Leonard Curtis, who owned an interest in the Colorado Springs EI Paso Power Company. He offered the inventor all the power he could use for his experiments free of charge. Real estate mogul John Jacob Astor provided $30,000 to finance the move, but the details of Tesla's st,range experiments were confided to his diary alone.

On Pikes Peak Avenue at the intersection of what would become Foote Avenue and Kiowa Street near the Colorado School for the Deaf and Blind, Tesla constructed his lab. It was an odd structure, featuring a retractable roof and an 80-foot tower giving support to a 142-foot metal mast. The mast was capped with a gigantic copper ball. As workers built the lab, Tesla guided assistants in constructing a “magnifying transmitter” that was a modified Tesla Coil (essentially a transformer circuit that produced electric currents) with an additional third coil. At 52 feet in diameter, it was the largest ever built, able to generate 12 million volts.

When the structure was complete, Tesla ordered the switch closed for a second. In that single second he blew out the power for all of Colorado Springs. City leaders demanded he repair the city's main generator out of his own pocket before he could have more power.

As his experiments continued, electrical sparks occasionally came out of residents' faucets. A horse bolted from a livery stable after getting shocked through its metal shoes. Sparks jumped between people and the ground as they walked along sidewalks, particularly near fire hydrants. Thunder from the lab could be heard as far away as Cripple Creek, 15 miles away. Even more unnerving, residents discovered Tesla could turn on light bulbs over a hundred feet from the lab without any power connection. Mysterious ball lighting was created in and around the lab that exploded when its paths were blocked. He experimented with the ionosphere and telluric currents below ground, and proved the earth itself was a far better electrical conductor than any manmade conduit.

Then in January 1900, Tesla abruptly left the city, heading east and taking with him more than 500 pages of notes. Banker and philanthropist J.P. Morgan backed Tesla's construction of the Wardenclyffe Tower on Long Island, N.Y., which they hoped would transmit the first radio communication across the Atlantic. Instead, in December 1901, using 17 of Tesla's patents, Italian inventor Guglielmo Marconi beat him to it.

Ultimately, Colorado proved Tesla's high mark. He became a recluse, living and working in Room 3327 of the New Yorker Hotel, with Westinghouse paying the rent. His favorite activity was feeding pigeons at a nearby park, where he began to evidence exceeding eccentricity. On one occasion, he spent $2,000 trying to mend the wing of an injured pigeon.

Sometime around Jan. 7, 1943, Tesla placed a DO NOT DISTURB sign on his door, lay down and died. With him went his claims of controlling the weather and of death rays. Following his death the FBI seized what remained of his notes for national security reasons, it was said. At his death he held more than 287 patents. The Alternating Current technology he pioneered remains the predominant method of delivering power to homes and businesses across the developed world.

Mike Coppock is a freelance writer based in Enid, Okla. 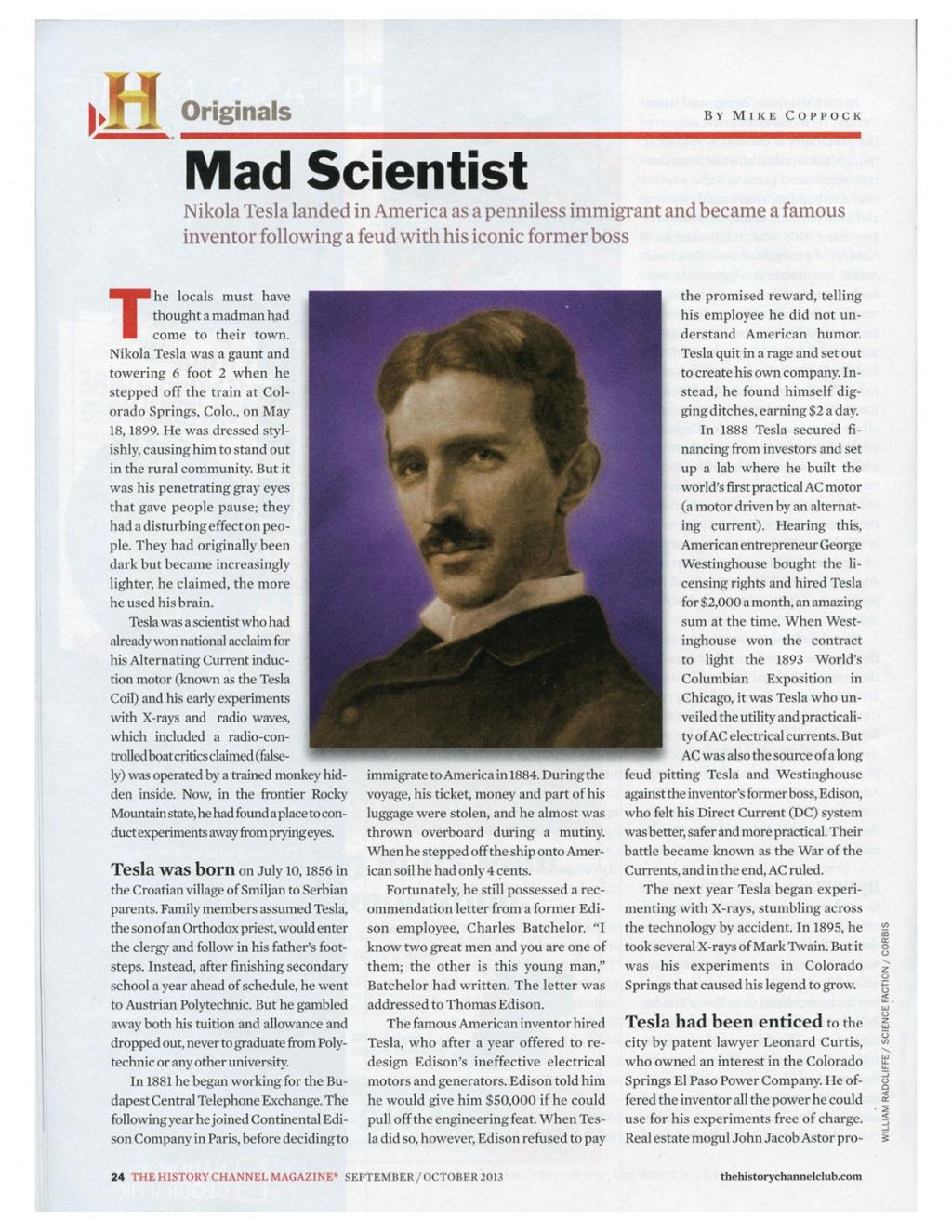