This company has been organized nearly two years, and has devoted that time to perfecting a complete arc-light system, which we take pleasure in presenting to the readers of the Review in this issue. The headquarters of the company are in Rahway, N. J., and a branch office in New York. The president of the company is Mr. B. A. Vail, of Rahway; vice-president and treasurer, Robert Lane, of East Orange; secretary, H. C. Carmen; electrician, N. Tesla. The particular improvements that are claimed for this system relate to the efficiency, the regulation and the safety. There are a number of novel features, particularly in the construction of the machine and its regulation.

In the illustration, Fig. 1, is given a side view of the Tesla dynamo. The magnetic frame of the machine is so constructed as to concentrate the greatest amount of developed magnetism upon the armature. To this end the cores of the field magnets are made tapering, and the magnetic frame is the smallest in section at the middle. The magnetism is in this way, the inventor states, concentrated upon the middle; the central line is sharply defined, and a better working of the armature is obtained. The main improvements claimed are, however, embodied in the construction and winding of the armature, which is supported upon a separately cast-base piece, fastened to the lower core by means of fusible dia-magnetic material. The object of the construction is to reduce to the minimum the development of Foucault’s currents in the armature core; and also to reduce to a minimum the resistance of the inactive wire on the sides of the armature, and to balance both parts of the armature. The shape of the armature is so calculated that these objects are obtained.

Mr. Tesla, the inventor, has obtained broad patents on the regulation of a dynamo machine on entirely novel principles. This method of regulation secures advantages in the way of economy and safety that he is confident are peculiar to this system alone. No auxiliary resistances, or opposing coils, are used, and the regulation is effected without waste of power.

In Fig. 2 is shown a view of the Tesla arc lamp. The main objects desired to be secured by the inventor, were first of all, simple and reliable apparatus; preventing the vibrations of the movable carbon in consequence of the fluctuations of the current; then to obtain a perfect feed and a steady light. The lamp cuts itself out and in without the aid of any auxiliary apparatus. The action of the magnets of the lamp is so delicate that the feeding is imperceptible. The design of the lamp frame is neat, and the lump is substantial and reliable.

This system is now in daily use on the streets of Rahway, N. J., where all visitors are privileged to see it at work. The company is now constructing a number of large machines, and is ready to go before the general public with an arc light system that will, no doubt, meet with great favor. 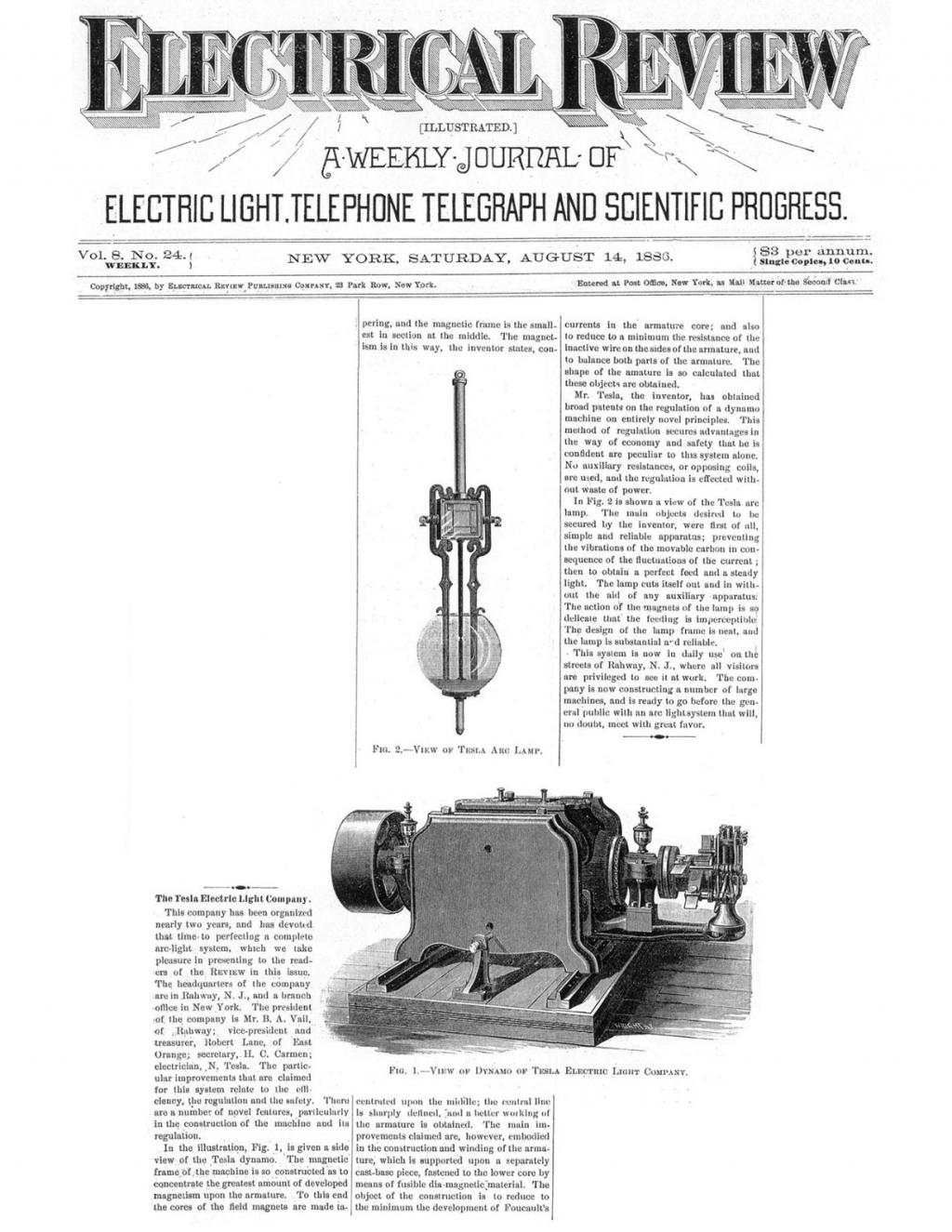