Nikola Tesla is not as famous as his contemporary, Thomas Edison, but his inventions brought the world into our modern age. Born in what is now Yugoslavia in 1856, Tesla was a brilliant student who demonstrated an early knack for inventing. After reading the works of physicist and spiritualist Sir William Crookes, he decided upon a career in electronics. That career would give the world some of its most important developments of science and technology: wireless communication, the alternating current motor, fluorescent lights and the AC electrical-distribution system used throughout the world.

Tesla popularized alternating current and invented the Tesla Coil, which makes the high voltage that drives the picture tube (CRT) in your computer, and ultimately received proper credit for inventing the radio, instead of Guglielmo Marconi, whose radio used essential components patented by Tesla. He discovered X-rays a year before W. K. Roentgen did and took the first X-ray photographs. He built a vacuum tube amplifier several years before Lee de Forest did and demonstrated the principles used in microwave ovens and radar decades before they became an integral part of our society. During the manufacturing of his inventions, he used only his brain to judge the dimension of an object to a hundredth of an inch and performed difficult computations without the benefit of a slide rule or mathematical tables, even after only one to two hours of sleep a day.

Unfortunately, Tesla the scientist was not an entrepreneur. Had he been as skillful with his business dealings as with his inventing, the world might know Nikola Tesla as it does Thomas Edison, and possibly enjoy some of the fantastic inventions Tesla conceptualized but never built, due to lack of funds. It was only in the 1950s that the world's scientists finally appreciated and began to acknowledge his greatness. In 1958 he joined the hallowed ranks of Gustav Ludwig Hertz, André Marie Ampère, Count Alessandro Volta and James Watt in having an international unit - the Tesla, measuring magnetic flux density - named after him.

Plagued by illness as a boy, Tesla spent much of his youth reading and imagining inventions. In his autobiography, My Inventions, Tesla writes, “In my boyhood I suffered from a peculiar affliction due to the appearance of images, often accompanied by strong flashes of light, which marred the sight of real objects and interfered with my thoughts and action. They were pictures of things and scenes which I had really seen, never of those I imagined. When a word was spoken to me, the image of the object it designated would present itself vividly to my vision and sometimes I was quite unable to distinguish whether what I saw was tangible or not.” This “affliction” seems to have served him well in later years: he despised freehand drawing and was able to conjure complete blueprints and specifications for his inventions in his head.

Tesla had a penchant for capturing the public’s attention with bold prophecies and extraordinary claims - oftentimes realized. When, for example, he told one of his physics professors that he could create a brushless motor - unheard of at the time - his professor invited the young student to lecture on the subject. At the close of the lecture, the professor announced that while Tesla was a great inventor, he would never be able to build a motor without brushes. “It is a perpetual motion scheme,” he said, “an impossible idea.” Tesla proceeded to silence his detractor by inventing just such a motor, the most trouble-free in the world.

Peerless men in their respective fields, Swami Vivekananda and Nikola Tesla frequented the same social circles while the Swami was in America from 1893 on and had several opportunities to discuss science and religion at length. It is not certain when these two great minds first met, but Tesla probably met Swami Vivekananda in 1893 at the Chicago World Fair held in connection with the World’s Parliament of Religions. He could have also first met him in 1896, after Tesla attended the swami’s lectures in New York. Tesla was moved by these lectures and saw in Vedanta the future of science. About a year after their meeting, Vivekananda was undoubtedly referring to Tesla when he told an audience in India: “I have myself been told by some of the best scientific minds of the day how wonderfully rational the conclusions of Vedanta are. I know one of them personally, who scarcely has time to eat his meal or go out of his laboratory, but who yet would stand by the hour to attend my lectures on the Vedanta; for, as he expresses it, they are so scientific, they so exactly harmonize with the aspirations of the age and with the conclusions to which modern science is coming at the present time.”

Now fascinated with the Vedic cosmology, Tesla began using the Sanskrit words akasha (all-pervading material of the universe) and prana (energy) to describe mass and energy in his work. The swami, seeking a unified primal energy beyond akasha and prana, went to see the scientist at his laboratory in February of 1896, hoping that he would be able to demonstrate that matter is simply potential energy. “In that case,” Vivekananda wrote, “the Vedantic cosmology will be placed on the surest of foundations. I am working a good deal now upon the cosmology and eschatology of Vedanta. I clearly see their perfect unison with modern science.” Both men must have been disappointed, however, since the results of Tesla’s demonstrations are unknown. In fact, more than a year later Swami Vivekananda said, “There is the unity of force, prana; there is the unity of matter, called akasha. Is there any unity to be found among them again? Can they be melded into one? Our modern science is mute here; it has not yet found its way out.”

Though Tesla clearly saw beyond the constraints of purely scientific thought, he tried to find nonspiritual explanations for the various “flashes of light” and psychic events he encountered throughout his life. He had a vivid premonition of his mother’s death at the moment she died. He also experienced several visions that saved his own life. In his autobiography, Tesla describes that, at age 14, he was swimming with friends when he found himself trapped beneath a wooden structure. “At that moment,” he writes, “when my situation seemed absolutely hopeless, I experienced one of those flashes of light and the structure above me appeared before my vision. I either discerned or guessed that there was a little space between the surface of the water and the boards resting on the beams and, with consciousness nearly gone, I floated up, pressed my mouth close to the planks and managed to inhale a little air.” Fortified with oxygen, Tesla was able to find his way out as his friends were fishing for his body.

Although he was a scientific visionary, Tesla was never able to prove empirically what Swami Vivekananda could clearly see as the perfect unison of Vedanta and modern science. In an article called “Man’s Greatest Achievement,” Tesla wrote: “What has the future in store for this strange being [man], born of breath, of perishable tissue, yet mortal, with his powers fearful and divine? What magic will be wrought by him in the end? What is to be his greatest deed, his crowning achievement? Long ago he recognized that all perceptible matter comes from a primary substance, or a tenuity beyond conception, filling all space, the akasha or luminiferous ether, which is acted upon by the life-giving prana or creative force, calling into existence, in never ending cycles, all things and phenomena. Can Man control this grandest, most awe-inspiring of all processes in nature? To do so would place him beside his Creator, make him fulfill his ultimate destiny.”

Mainstream scientists stand in awe of Tesla for his inventions. But there is another following out there. A quick search of “Tesla cult” on the Internet will bring you a large collection of fantastic stories about Tesla.

For example, in 1908 there was a huge explosion in Siberia, probably from a comet entering the atmosphere. Believers speculate it was caused by Tesla’s “death ray,” shot from his Wardenclyffe Tower, theoretically operational at that time. One website claims a Japanese cult rediscovered Tesla’s weapon of destruction and tested it on May 28, 1993, northwest of Perth, Australia, where a 3.7 earthquake struck - the first ever recorded quake in that part of Australia. The account states, “This was probably the first time since 1908 that the full power of Tesla’s death ray had been unleashed.”

Even stranger is http://business.gorge.net/zdkf/kul-tsp.html with its description of Tesla’s connection with aliens and more. “If you have gone through our KUFOL materials, you surely noted the mysterious Area 63. Consequently, we speculated at that time that someone was attempting to build a Dazer Tower there. However, in light of Tesla’s work, it now seems more likely that the government took Nikola’s particle beam weapon, built a kind of Wardenclyffe type tower somewhere out there in the Utah desert, and if the Roswell incident is any indication, have been using it to shoot down alien spacecraft. For, before the crash of the Roswell craft, witnesses said that there was some kind of electrical or lightning storm.” It goes on, “Despite the substantial rumors that Tesla was involved in some kind of wild experiment in World War II, where he electrically teleported a whole ship from a dock in Philadelphia out to sea, we were unable to locate any facts concerning this. It is more than possible that he found some way to levitate a whole ship electrically out to sea.”

Labeled “the man out of time,” Tesla developed the polyphase AC system of power transmission, which drives every home and industry in the world. He invented the Tesla coil to create high-frequency electricity, used in TV tubes, neon and fluorescent lighting, radio transmission, remote control and hundreds of other devices which are an essential part of our everyday lives. He harnessed the power of Niagara Falls and took the first X-ray photos. He anticipated the development of radio and television broadcasting, robotics, computers, faxes and even the Strategic Defense Initiative. Even today scientists glean through Tesla’s research notes looking for insights.

Radio: Tesla invented the radio, contrary to popular belief that Marconi did

Tesla coil: A high frequency device that can create millions of volts and produces lightning. It’s used in CRTs in TVs and monitors.

Wireless light bulb: His famous electric light, powered without wires, was one of the first fluorescent light bulbs

AC Motor: This is the first “brushless” AC motor used virtually everywhere today and far superior to any other electrical motor

For a video and more info on Tesla visit: www.pbs.org/tesla/ 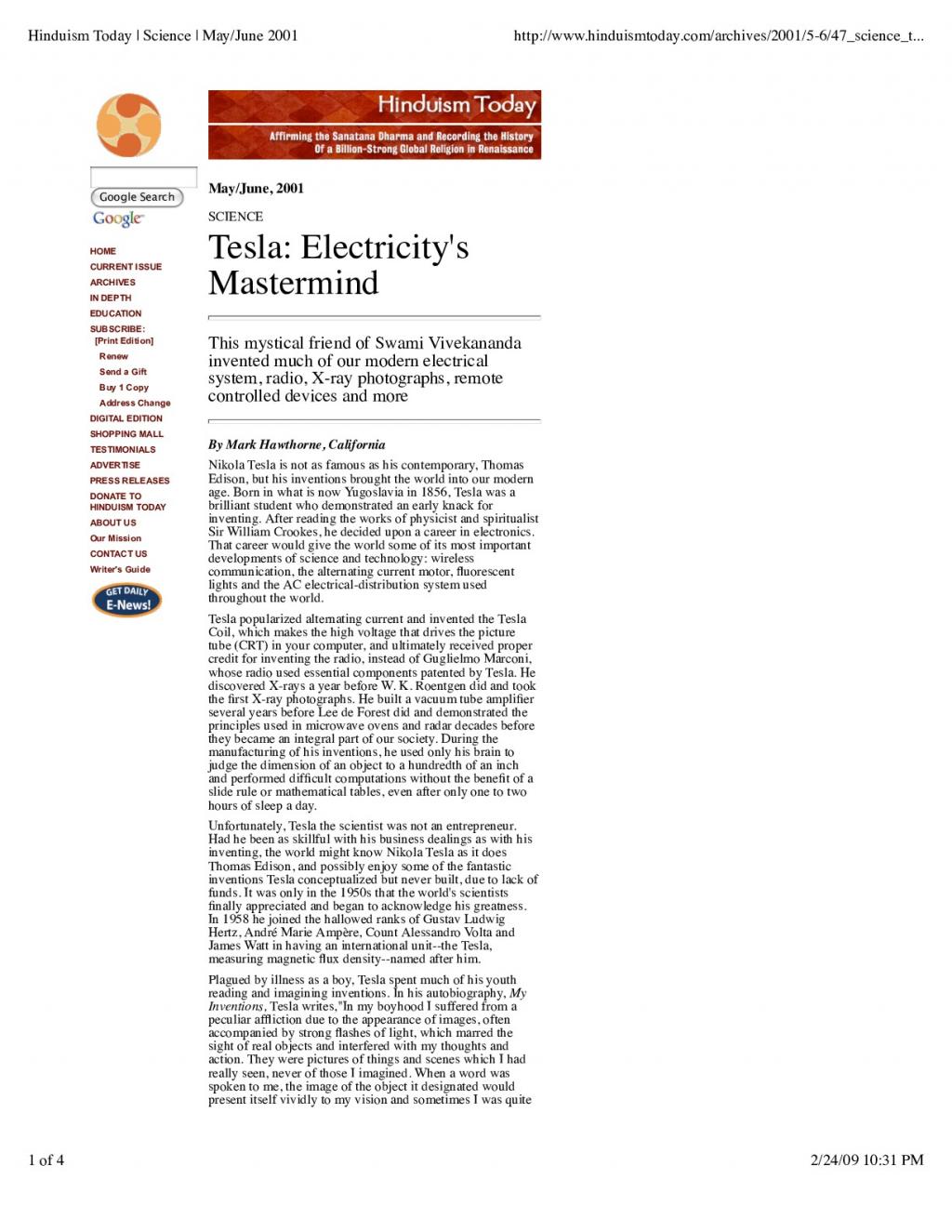