Mark Twain, the renowned author and humorist, once said: “Thunder is good, thunder is impressive, but it is lightning that does the work.”1 It is, perhaps, this amazement with magnificent illumination and the ability to manipulate light that drew Twain to Nikola Tesla. The friendship of the two men is well-documented, albeit slightly unusual. Tesla was a tall, slender man with peculiar habits, an oft-forgotten engineer and inventor; Twain, a man with a booming literary voice, was one of the best-known and best-loved of American authors. Yet despite these differences, the two forged a strong and enduring friendship, meeting often at The Player’s Club in Manhattan or in Tesla’s laboratory. It was there that the friends exchanged stories, laughs, and an occasional show of the ‘lightning’ so esteemed by Mr. Twain.

The first encounter of the two personalities did not occur in person, but rather through Twain’s writing. Tesla, in his autobiography, writes of a certain predestinated quality of the friendship, and credits Twain as one of the first who inspired him. During Tesla’s studies at the Real Gymnasium, a school in Carlstadt, he was “prostrated with a dangerous illness or rather, a score of them, and my condition become so desperate that I was given up by physicians.”2 It was during this time of extreme desperation that Tesla discovered the works of Mark Twain, whom he credited with having, in effect, saved his life. The accuracy of Tesla’s anecdote can be called into question, because, as Margaret Cheney writes, “Twain at that time had written almost nothing that might have found its way across the ocean and into a Croatian library.”3 Yet it is clear that whatever the validity of this particular tale, it lay the foundations for an impressive friendship, exhibiting Tesla’s veneration of the author and his words and crediting Twain with nothing short of a miracle. Tesla describes the encounter:

One day I was handed a few volumes of new literature unlike anything I had ever read before and so captivating as to make me utterly forget my hopeless state. They were the earlier works of Mark Twain and to them might have been due the miraculous recovery which followed. Twenty-five years later, when I met Mr. Clemens and we formed a friendship between us, I told him of the experience and was amazed to see that great man of laughter burst into tears.4

When Tesla arrived in New York one June day in 1884, his mind was focused on matters apart from those of the literary ilk. He went to work for Thomas Edison, and it was not until 1888, more than four years later, that the stories of Tesla and Twain once again intersected. Twain first became aware of Tesla’s brilliance in November of that year, when he remarked upon the inventor’s newly publicized AC polyphase system. The author was awestruck by the sheer genius of the machine, and wrote in his Notebook: “I have just seen the drawings & description of an electrical machine lately patented by a Mr. Tesla, & sold to the Westinghouse Company, which will revolutionize the whole electric business of the world. It is the most valuable patent since the telephone.”5 Twain was quite astute in his judgment; the invention did indeed bring a drastic transformation to the electric industry and to our everyday lives. And from here, the author’s respect for Mr. Tesla only grew more and more pronounced.

Tesla and Twain began to run into one another on occasion at the haunt they both frequented - The Players’ Club. The two men shared several common acquaintances, including the artist Robert Reid, the editor Robert Underwood Johnson and his wife Katherine, and Joseph Jefferson. Tesla also crossed paths, at the restaurant Delmonico’s or at parties hosted by Reid or by the Johnsons, with such luminaries as Rudyard Kipling, Theodore Roosevelt, and John Muir.6 But of these renowned personalities, it was Mr. Twain to whom Tesla was most drawn.

In 1894, Tesla invited Mark Twain, along with Robert Johnson, Marion Crawford, and Joseph Jefferson, to his lab. It was there that the first photographs ever to make use of phosphorescent light were taken. Twain went to experience the photography and “take high voltage sparks through [his] body,”7 as Tesla joked, at least twice in 1894, on March 4 and again on April 26. Johnson described the experience:

We were frequently invited to witness his experiments, which included...the production of electrical vibrations of an intensity not before achieved. Lightning-like flashes of the length of fifteen feet were an every-day occurrence, and his tubes of electric light were used to make photographs of many of his friends as souvenir of their visits... I was one of a group consisting of Mark Twain... and others who had the unique experience of being thus photographed.8

Yet another excitement awaited Tesla’s visitors at the laboratory. Tesla had been perfecting a mechanical oscillator, a sort of engine that would produce alternating current of a high frequency. The inventor had noticed an interesting effect of the machine: it produced significant vibrations. Tesla wondered if these vibrations might have therapeutic or health benefits, and one day when Mark Twain was at his lab the author asked if he might experience these vibrations himself.

As the story goes, Mr. Twain stood on a platform of the machine while Tesla set the oscillator into operation. Twain was enjoying himself greatly and exclaimed: “This gives you vigour and vitality.”9 After some time Tesla warned the writer that he should come down, but Twain was having fun and he refused. Tesla again insisted, but Twain stayed on the machine for several minutes more until, suddenly, he exclaimed: “Quick, Tesla. Where is it?”10 Tesla directed his friend to the restroom. Twain had experienced first hand what had been known to the laboratory workers for some time: the laxative effect of the machine’s vibrations.

In 1897, Twain left for Austria, to spend some time in Vienna. A year later, having heard of Tesla’s newest ideas and inventions, his “patents on destructive terror”, and concerned about peace and disarmament, Twain wrote the inventor from Europe. Though they were separated by an ocean and half a continent, Twain was still very much drawn to Tesla and to the gadgets and inventions that seemed to cascade out of him. In addition, Twain held rather strong convictions about the proper manner in which to avoid war, which he shared with Tesla:

Have you Austrian & English patents on that destructive terror which you are inventing? - & if so, won’t you set a price upon them & commission me to sell them? I know cabinet ministers of both countries - & of Germany, too; likewise William II.

I shall be in Europe a year, yet.

Here in the hotel the other night when some interested men were discussing means to persuade the nations to join with the Czar & disarm, I advised them to seek something more sure than disarmament by perishable paper-contract - invite the great inventors to contrive something against which fleets & armies would be helpless, & thus make war thenceforth impossible. I did not suspect that you were already attending to that, & getting ready to introduce into the earth permanent peace & disarmament in a practical & mandatory way.

I know you are a very busy man, but will you steal time to drop me a line?

In the first decade of the 19th century, Twain did not frequent Tesla’s laboratory as often as he had in the past. But the two “sought each other’s company as often as their work and other demands permitted, meeting usually at the Players.’”12 Twain’s final novella, titled The Mysterious Stranger, is said to have been influenced by the story of Tesla’s childhood in Austria-Hungary.13 When the author died in 1910, the loss affected Tesla deeply.

The years came and went, and in January of 1943 Tesla too found himself close to death. Early that month, he asked Kerrigan, a favorite messenger boy of his, to deliver a sealed envelope to: “Mr. Samuel Clemens, 35 South Fifth Ave., New York City.” Mr. Clemens, of course, had been the true name of the author Mark Twain. When Kerrigan returned, unable to find the address, Tesla informed him: “Mr. Clemens is a very famous author who writes under the name Mark Twain, and you should have no trouble locating him at the address I gave you. He lives there.” When Kerrigan reported to the manager of the messenger office, the manager told him that Mark Clemens had been dead for some years. As it turned out, the address Tesla provided had been that of his old laboratory, but now South Fifth Avenue had been changed to West Broadway. Tesla, upon learning this, was greatly aggravated and refused to believe the boy: “Don’t you dare to tell me that Mark Twain is dead. He was in my room, here last night. He sat in that chair and talked to me for an hour. He is having financial difficulties and needs my help. So you go right back to that address and deliver that envelope - and don’t come back until you have done so.”14 Clearly, Twain was still very much alive for the inventor. Though his near-death delirium muddled the dates and blurred reality and imagination, Tesla was still engaged in conversation and fun with Twain, as the two had been in life. 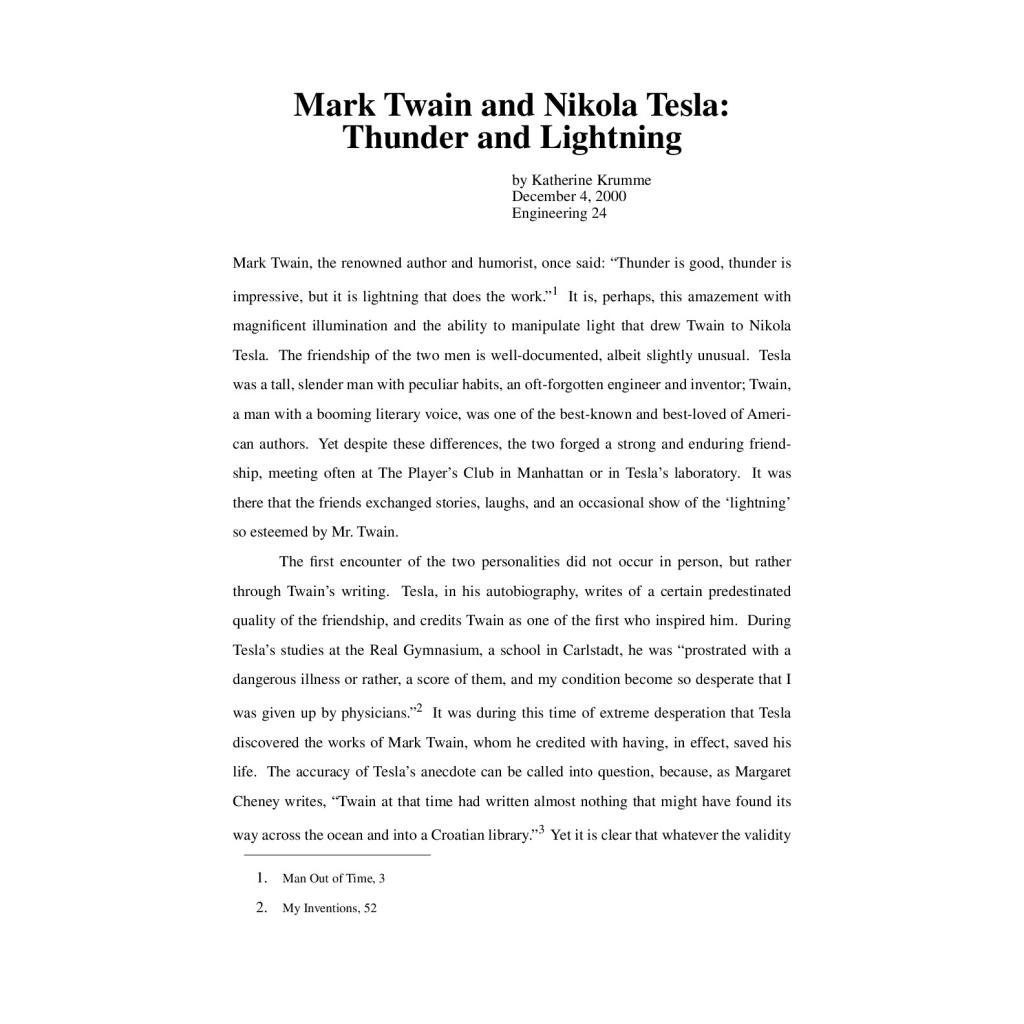