The Inventor Announces the Success of His Life-Long Dream.

Produces an Electrical Disturbance Which, He Says, Is Felt Everywhere.

Fiery Flames, Like Serpents, with Power to Kill, Spring from an Electrode.

Will Publish the Discovery.

Says His Facts Will Be Given to Science as Soon as His Data, Now Being Arranged, Is Completed.

Nikola Tesla announced yesterday the completion of his latest discovery - the simultaneous transmission of messages by means of the earth's electrical currents to as many scattered points on the surface of the globe as may be desired. This he regards as by far his greatest achievement.

He will follow his usual custom and lay his information before the world of science in his own words accompanied by his own computations and conclusions. To a few intimates he gave a thrilling demonstration of the operation of his device for arresting and subjecting to control under natural laws the electrical substances in and about the earth. His latest invention, device or discovery is to produce a disturbance of the electricity of the earth which can be felt and noted simultaneously at all parts of the globe.

"I am producing," said he, in the course of his remarks, "an electrical disturbance of intense magnitude, which is continuing throughout the entire earth. In other words, I am producing a disturbance of the earth's charge of electricity, which can be felt to the uttermost parts of the earth. In this way messages can be sent the entire earth around, and be taken up at any part of the earth, without the aid or intervention of wires in any way at all."

Tesla had his rooms in the laboratory on Houston street darkened. From a room adjoining the one in which he and his visitors stood a current was turned on invisibly. A huge black disk hung on a frame about eight feet in diameter, from the center of which protruded a brass electrode seven inches in diameter. As the group gazed at this the apartment was filled with a crackling sound, which increased till it sounded like the rattle of musketry. Bright flames shot from the electrode, not from pole to pole, as in ordinary demonstrations. Like fiery serpents the wavy coils of flame darted in graceful lines around the disk. The longest sparks were fully eight feet from the point when they burst into dazzling brilltaney to the vanishing point. These electrical sparks were undoubtedly the longest flashes of light ever produced by similar weans.

It seemed like a terrific lightning display, with the snapping, crackling sound, displacing the reverberation of heaven's artillery, and all remarked the weird and awing effect of the exhibition.

"What are you doing?" was asked Tesla.

"And the result will be?"

"Ah." said Tesla, his face lighting up and his spare figure vibrant with pride and enthusiasm, "that is almost incomprehensible. This electrical disturbance, by means of certain simple instruments, can be felt and appreciated at any point of the globe. In this way messages can be sent to the entire earth around and be taken up at any part of the earth without the aid or intervention of wires in any way at all."

"What is the voltage?" Tesla was asked. He motioned expressively with his long finger and said quietly: "As far as voltage is concerned, that is almost beyond computation. Yet, let me tell you, I stood in front of that flume and had that charge shot through me and experienced no unpleasant sensation. Dangerous? Yes, it is dangerous, and I shall not repeat the experiment, for it exposes the blood to a terrific tension. If those tongues of living flame touched an artery and it burst, in an instant one would be bloodless and lifeless."

"Practically, then, if, say, Queen Victoria were to die, and these instruments for picking up and appreciating the vibrating ether were in place, a message could be sent simultaneously to every quarter of the British Empire, and all her subjects apprised of her demise?" inquired a spectator.

"Precisely. The shock transmitted from the sending point would be appreciable anywhere on earth. This is my greatest and latest discovery, which I intend to give to the scientific world as soon as my data, which is now virtually complete, is arranged." 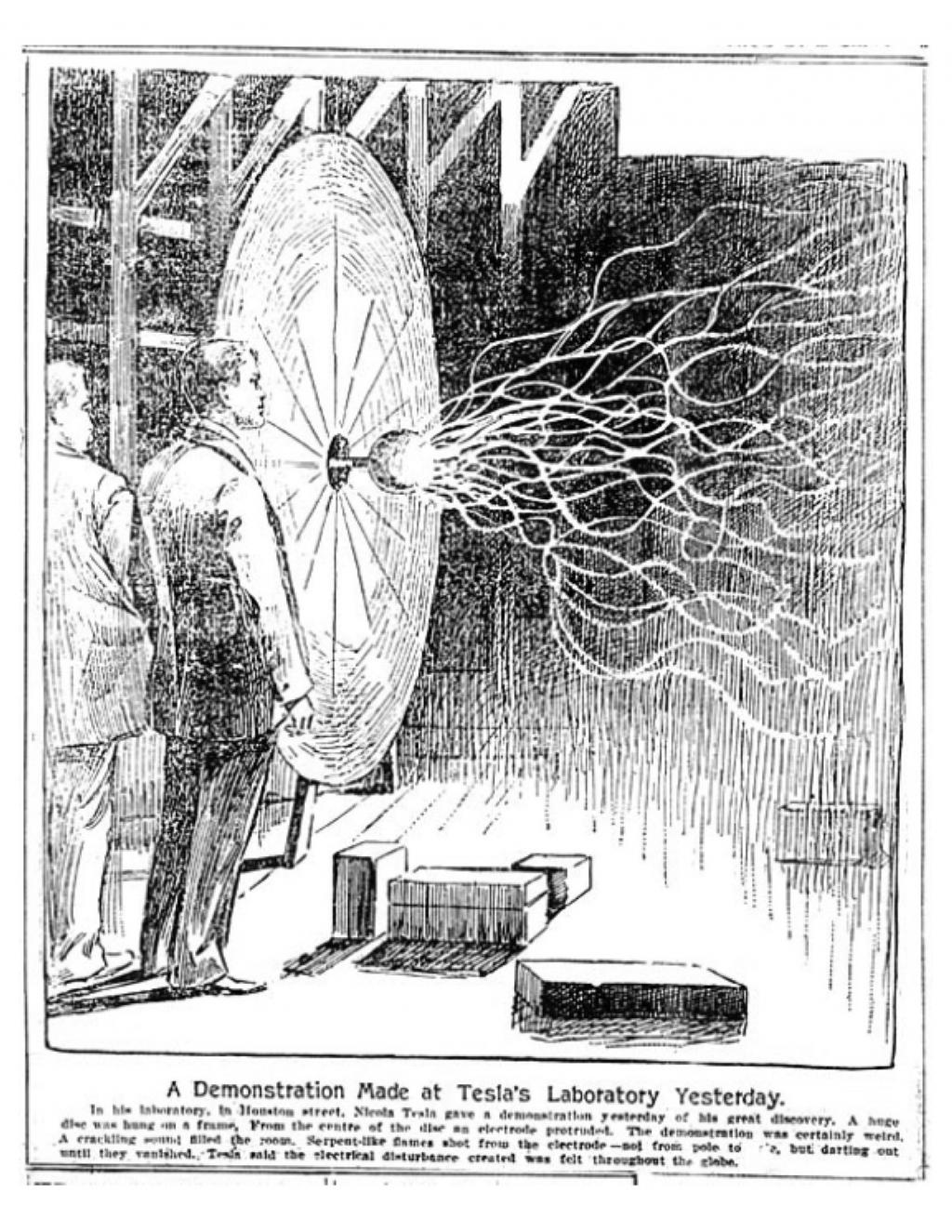