Tesla's New Invention to Preserve the Beauty of Youth Through Life

Nikola Tesla's Statement To The Sunday World Explaining His Invention

He Contrives a Marvelous Electric Current which, Properly Applied, Gives the Skin a Tint of Wonderful Purity and Health

Has the secret of eternal youth been discovered by Nikola Tesla in the electrical apparatus which he describes in another column? If it has - if a woman by its means can really retain the pure, soft, pink-white skin of babyhood, why, then - the machine! What is it like? Quick, quick! Tell us all about it.

Well, then, Mr. Tesla, you must know, first of all, experimented with the most powerful microscope ever built, which he turned upon the human skin. He found - physicians and chemists know this of course - that it is practically never clean, that in the cities especially, it is not only covered with inorganic waste constantly settling down upon it, like coal smoke, for instance, but that is is the playground of minute microbic organisms that drop upon it from the polluted air and live and multiply.

Then Mr. Tesla experimented with a big globe covered with paint. Through this he ran a powerful electric current, which caused the paint to scale off, leaving the globe clean and fresh.

That’s precisely what the wizard of the wire proposes to do with fair woman to make her more fair.

He has devised a reclining chair upon which the subject lies, perfectly nude. Two wet sponges are applied to her feet, two to her arms. The current is turned on; it thrills, tingles and wakens the skin, and then, as the paint flakes fell from the globe, so fall from her all the dirt which covers the skin, so flutter away also, the hideous microbes, fairly shocked into quitting their hold.

The skin becomes as the skin of a babe. It is as the fresh skin which replaces that which sloughs off from a scar or a burn. This is the discovery in a nutshell.

So far as external appearance goes, there will be no more old men and old women if the use of this electric chair becomes general. Everyone will go down to his grave retaining all the outward appearance of blooming youth. There will be no more wrinkles, no more sallow cheeks, no more hideous alpine valleys ploughed in the surface of beauty’s brow. Every man and woman may at will enjoy the appearance of youth. It is like the fabled spring of Ponce de Leon.

There has always existed in the minds of the people a conviction that somewhere, either in the deep forests of America or in the valleys of the little-known countries of Asia, there is to be found a magic spring or clear pool of wonder-working water which, if plunged into by any man, would immediately restore to him all the appearance of his youth. No matter how old the person might be, it was held that the moment he had entered the pool his white hair would turn to its original color, the deep wrinkles of his face would be smoothed away, and that the glossy yellow of his skin would be replaced at once by the soft, pink hue of his boyhood.

Like every other boy, Nikola Tesla heard this myth when he attended school. It so strongly impressed itself upon his mind that he decided to find that spring when he should have grown to be a man. In his maturer years Tesla realized the impracticability of roaming over the earth in search of something he would probably never find.

He has done better; he has found the haunted pool in science and has plumbed it with electrodes.

He says, does this magician, that although it seems impossible, it is a fact he has demonstrated that to bathe the body in water is not to rid the skin of the deadly microbes which prey upon it. “Indeed,” says Mr. Tesla, “water is really an aid to the microbes in fixing their hold upon the skin and hair.”

Beauty - Destroying Germs, Hitherto Unconquerable, Ejected from the Pores by the Newest Device of the Wizard of Electricity

Mr. Tesla refuses to discuss for publication the construction of his new battery at this early stage. He says that it has involved a great deal of labor, and to give out a full description of the principles upon which it is built before he has had it patented would be scarcely doing himself justice. Besides, he wishes the first full description to be written by himself and, to appear in the columns of some purely technical magazine. Just as soon as the battery has been patented stations will be opened in all large cities where the Tesla battery treatment will be given to people every day just as Turkish baths are now given.

The cost of the new apparatus will likely always be too great to allow of every home being provided with one, but baths at public stations will be easily available and no doubt popular, as the price will be ultimately only 25 cents or less. The fixtures and working appliances of the Tesla baths will be much less numerous and expensive than those required in a Turkish bathing institution.

The chief feature of Tesla’s method to make all women beautiful and young is the specially invented battery he uses to charge the body with electricity. All that can be seen of its construction is a huge iron chest with a meter on its face and a single bar of bronze which juts from the top, and is turned about to regulate the amount of electrical power transmitted from the concealed battery over the four covered wires which hang from the bottom of the chest and are used to charge the hands and feet of the person undergoing the bath.

This battery has a marvelous power, of which Tesla gave The Sunday World reporter a practical illustration. A huge ball of copper was lying on the floor near by. It had been coated with black paint some three weeks before, and the thick coating of the paint was as dry as the ball itself.

Merely to show the violence with which the new battery rids any body of foreign substance when charged with electricity from the battery, Tesla picked up this huge copper ball and placing it on a wire stand lightly touched the four wires of the battery to the ball. Just on the instant a perfect shower of black flew about the room, and a few minutes afterward it was discovered that not a single particle of dried paint remained on the surface of the copper ball, and the ball continued to shine just as it had been shining before receiving its murky coat.

Nikola Tesla’s Statement to the Sunday World Explaining His Invention

Every one is aware how fresh looking and peachy is the complexion of the women who live in high altitudes which are free from rugged winters, such, for instance, as the Alps or Pyrenees, mountains of Europe. The same is also true of women living in the small but high and dry islands of the Atlantic ocean. But in large cities, and particularly among the poorer classes who live in tenements, women are almost universally sallow and yellow-faced. Now what is the cause of this state of affairs?

Pasteur and Koch have each established the fact, now becoming generally recognized among scientists, that between 4,000 and 7,000 microbes per square foot fall through space and fasten themselves on every human body in each twenty-four hours. For the past six years I have been studying these bacilli through the most powerful microscope I could have manufactured and the results have been simply amazing to me. People who bathe themselves thoroughly in soap and water every day have an idea that they are utterly free from microbes and that their skin cannot be made any cleaner. If these people had only the opportunity to gaze for a moment through a very powerful microscope such as mine, they would be utterly astonished to see the millions of germs swarming over every inch of their own bodies. These germs, besides making such a hideous sight, are eating up the vitality and freshness and destroying the healthy particles of the skin at a rapid rate.

It is the presence of these millions of germs and their voracity in devouring what is good in the human skin that rots away the hair, helping to turn it gray or white; that accounts for the fading of the naturally (sic) pink tint of the human body; that is responsible for the drying up and wrinkling of the fresh soft skin; that turns the skin eventually to yellow, and that in the case of people with very dirty habits brings on warts and other revolting sores.

This being the case, the question suggested itself to me. Cannot some means be devised of keeping these microbes from reaching to the human body?

There is no escape from the invasion of the human body in city localities by these microbes. No amount of clothing can keep them off, as they fall through the pores of the clothing just as a fly would get through the meshes of the net of a fisherman.

I have made extensive study and experiment to the end of finding some means of clearing the human skin of these deadly microbes, and I have succeeded in inventing a means by which it can be kept free from their ravages. The presence of these microbes being the cause of so much injury, with the removal of the cause of injury there is every reason to believe that the skin of a perfectly clean woman can be made to retain through old age to her death the bloom and freshness of youth, the color and softness of girlhood, and the vigor and pliableness of the skin which every woman possesses until by degrees these wandering microbes fall headlong to her skin and begin the ravages which result in wrinkles, yellowness, gray hair and general puckered-up appearance.

Next, the body is thoroughly rubbed with the hands to stir up electricity, and through the feet and hands the whole body is charged with electricity from a battery I myself invented. With this battery I have charged human bodies so successfully that the microbes have been thrown off in a perfect shower to the ground, some of them being thrown as far away as four and five feet. This charging of the hands and feet relieves the skin and hair entirely of the microbes, and the skin can go on living its natural life of softness and freshness. Still other microbes will fall upon it the next day, but these are always removed before twenty-four hours, so that none of them remain long on the skin and in the hair, being removed by the electricity before they have had time to do much ravaging.

After the body has been charged it is given an electric massage by means of the new current invented by me. The whole affair is finished off by a slight bath of the same disinfectant used in the beginning. 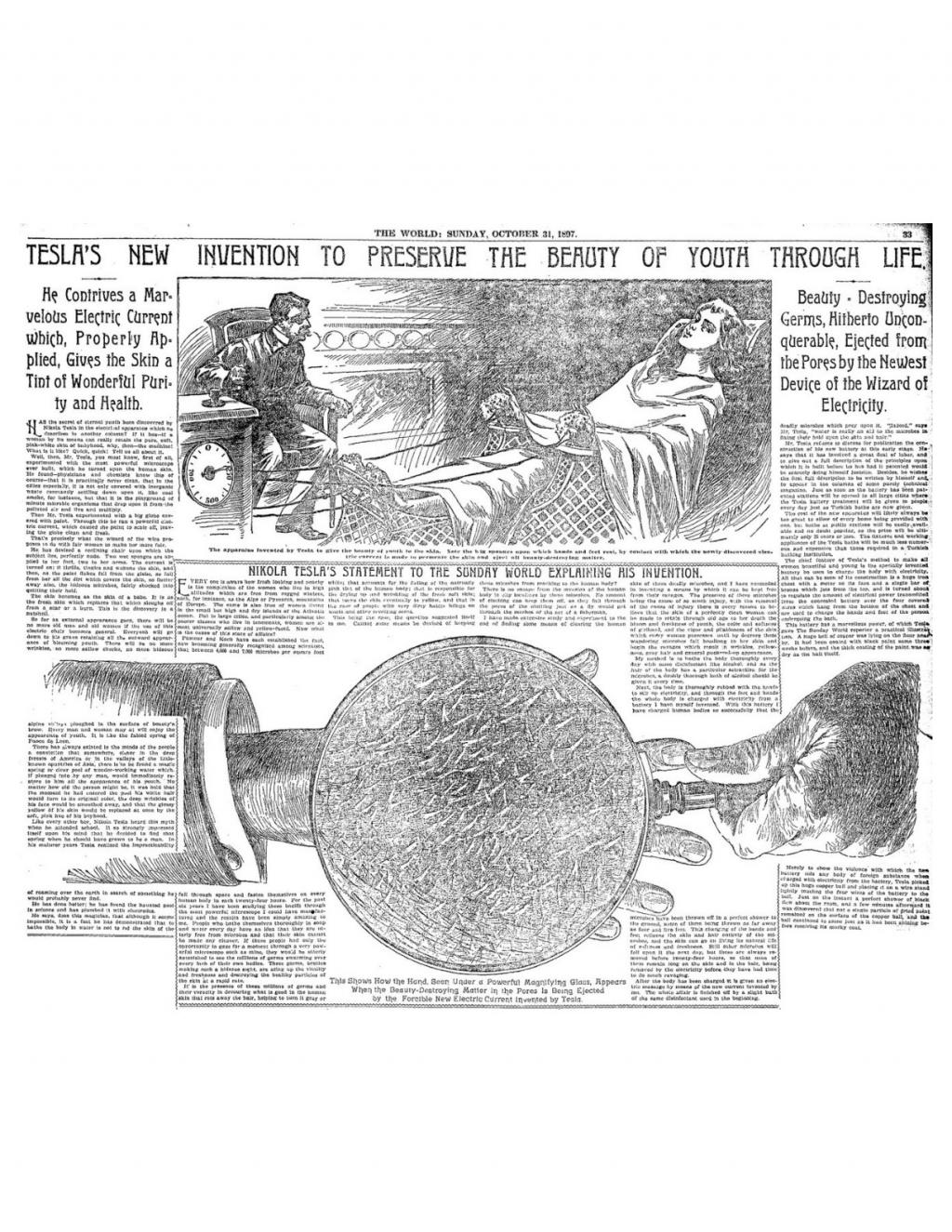