The world reads of the wonders accomplished bu Nikola Tesla, famous scientist in New York, who on the occasion of his seventy-ninth birthday last week announced startling additions to his long list of discoveries, such as something in telegeodynamics by means of which mechanical energy may be transmitted thru the earth, and which he says may result not only in a new form of communication but the location of ore bodies, and Colorado Springs probably feels a little ashamed that once it could not see his greatness.

For Tesla lived here and carried on experiments. A ready response for his enthusiastic research was lacking. He went elsewhere. Now New York claims him for its own, and with great pride, even if he did, as reported, start an artificial earthquake, which, tho nipped in the initial shake, so to speak, demonstrated how in the future cities may possibly be shaken to pieces, if other means of destruction are not adequate in time of war.

The eyes of science are on this Yugoslavian wonder-worker who has been able to see what other men have not and to learn stupendous secrets of nature. It is with awe that his name is uttered, for now that the mighty Edison, who gave the world electric lights, is dead Tesla stands at the very pinnacle.

Some called him “a dark slim foreigner” when, in the late 1890′s, he was in Colorado Springs. He had a large barnlike structure on Nob hill and there secretly he conducted electrical experiments. To the the truth, he probably was not taken very seriously. It is easy for the unscientific to tell, in terms of utmost positiveness, what can and cannot be done in this old world. One day in 1890 1900 this “dark slim foreigner” suddenly departed, leaving his equipment behind him. The late Manly D. Ormes, pioneer resident of the city and librarian of Colorado college, in an interview published May 3, 1924, said:

“I remember the barn-like structure distinctly, and which I cannot exactly locate it, I should say it might have been north of the Deaf and Blind school or on East Pikes Peak avenue on the heights.

“Visitors were not allowed inside, and it was with mingled feeling of surprise that we heard one day he had left suddenly, leaving behind his apparatus and effects. I think it was generally believed he was a visionary. It now appears that people were mistaken.”

Tesla was no beginner in science when he came to Colorado Springs. As that time he had a national reputation. In July of 1931, when Tesla was attracting worldwide attention, a New York news dispatch said:

“Tesla has left behind him three-quarters of a century of high achievement, being generally considered the father of both radio and modern power generation and transmission, but it is in the fourth quarter he expects to do his greatest work. He is nearing the end of a road he has been traveling for more that a quarter of a century, and expects his labor to bear fruit which will be his greatest triumph.

“I am naturally anxious to give the facts to the world as soon as possible,” he said, “but I also wish to present them in a finished form. That may take a few months, or a few years.”

“So far, he said, he has proved his theories concerning the hitherto untapped source of immense power by experiments, and he was confident that calculations based on these experiments would prove true.

“‘If so,’ he continued, ‘then a new source of power, available at every point of the globe, in amounts practically unlimited, will be opened up.’”

That was four years ago. Last Thursday Tesla, 79 years old, in New York, talked of his perfection of a cosmic machine he has in his laboratory, driven by cosmic particles striking the earth at speeds 50 times greater than that of light, and said that such machines, if perfected, would supply enough power to supply the city of New York from particles striking on an area of one square foot.

Such things stagger that imagination. The man who can discover them and develop them, is a superhuman. This superhuman, Tesla, is the same man who conducted experiments on Nob hill here and of whom residents of the city probably slyly smiled as they considered he was wasting his time on some wild goose chase. But this is a story that is as old as humanity. The truly great go right on, oblivious to it all. 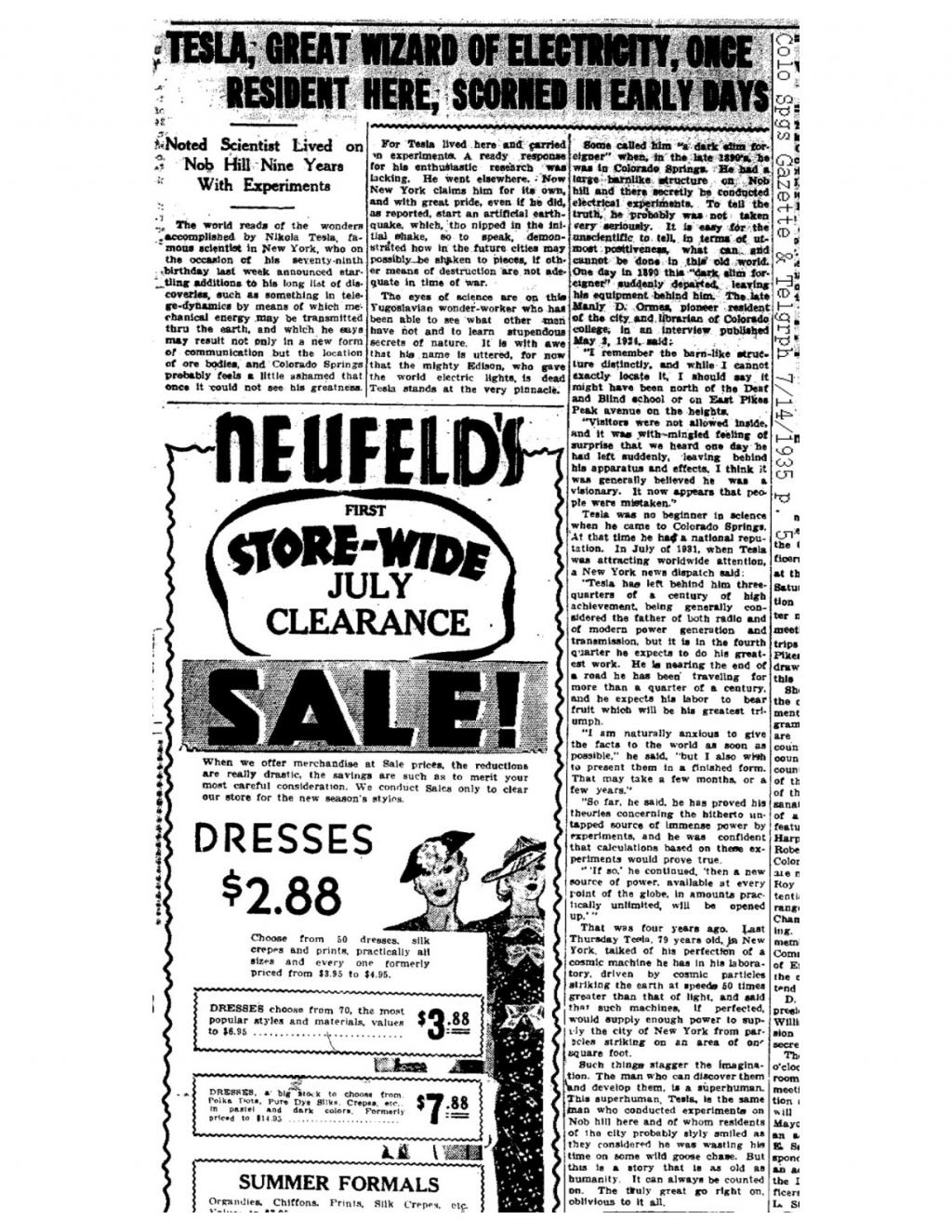