Inventor at 75 Declares He Has Developed Means to Create Universal Brotherhood.

Asserts We Will Communicate With Humans on Other Worlds of the Universe.

Father of Radio Receives Volume of Letters From Leaders as He Celebrates His Birthday.

In honor of the occasion Dr. Tesla revealed in an interview that he had developed after many years of concentrated effort a means that will make it possible for man to transmit energy in large amounts, thousands of horse power, from one planet to another, which, he believes, some day will open the way for interplanetary communication.

During the day a volume was presented to him containing letters of congratulation from about 100 inventors and scientists. These included Sir Oliver Lodge, E. F. W. Alexanderson, Lee De Forest, John Hays Hammond Jr., Dr. Robert A. Millikan, Secretary of Commerce Lamont, H. H. Westinghouse, B. A. Behrend and Count von Arco.

“I feel,” he said, “that we are nearing a period when the human mind will perform greater wonders than ever before. This is due to the continuous refinement of means and methods of observation and the ever-increasing delicacy of our perception.

“Will man conquer nature some day?” he was asked.

“As I examine the possibilities of achievement,” he replied, “and the benefits which the human race may derive from them I think that nothing can be more important than interplanetary communication. It will certainly come some day, and the certitude that there are other human beings in the universe, working, suffering, struggling, like ourselves, will produce a magic effect on mankind and will form the foundation of a universal brotherhood that will last as long as humanity itself.”

“Then you believe that life exists on other planets?”

“It is a mathematical certitude!”

“I wouldn't have told you that under ordinary conditions,” he added with a smile, “but the seventy-fifth birthday is a rare occasion.”

“How soon will you make your discovery public?”

There was a trace of regret in his voice as he answered, and the look of a man who has work enough for centuries and only a few years to do it in.

“I have been leading a secluded life,” he said, “one of continuous, concentrated thought and deep meditation. Naturally enough, I have accumulated a great number of ideas. The question is whether my physical powers will be adequate to working them out and giving them to the world. It is as Goethe said:

He had not read Goethe for forty years, be said, and he quoted it from memory. The conversation turned to the subject of the human brain.

“We are all automatons,” he reflected, “obeying external influences. We are entirely under the control of agents that beat on our senses from all directions of the outside world. Being merely receivers from the outside, it is a very important question how good the receivers are - some are sensitive and receive accurately. Others are sluggish and their reception is blurred. The individual who is a better machine has so much greater chance of achieving success and happiness. An individual who is an offender of law is a machine in which one or another organ has been deranged, so that the responses are no longer accurate.

“There is no chance in nature, although the modern theory of indeterminacy attempts to show scientifically that events are governed by chance. I positively deny that. The causes and effects, however complex, are intimately linked, and the result of all inferences must be inevitably fixed as by a mathematical formula.

“I also absolutely deny the existence of individuality. It took me not less than twenty years to develop a faculty to trace every thought or act of mine to an external influence. We are just waves in time and space, changing continuously, and the illusion of individuality is produced through the concatenation of the rapidly succeeding phases of existence. What we define as likeness is merely the result of the symmetrical arrangement of molecules which compose our body.”

Says There Is No Soul.

“How about the soul - the spirit?” he was asked.

“Ah,” he exclaimed, “but there is no soul or spirit. These are merely expressions of the functions of the body. These life functions cease with death and so do soul and spirit.

“What humanity needs is ideals. Idealism is the force that will free us from material fetters.”

The inventor spent the day as usual. He went to bed at 5:30 A.M. and rose again at 10:30, after five hours' rest. However, he did not spend the entire five hours in sleep.

“I rolled around in bed,” he confessed, “and worked on my problems.” 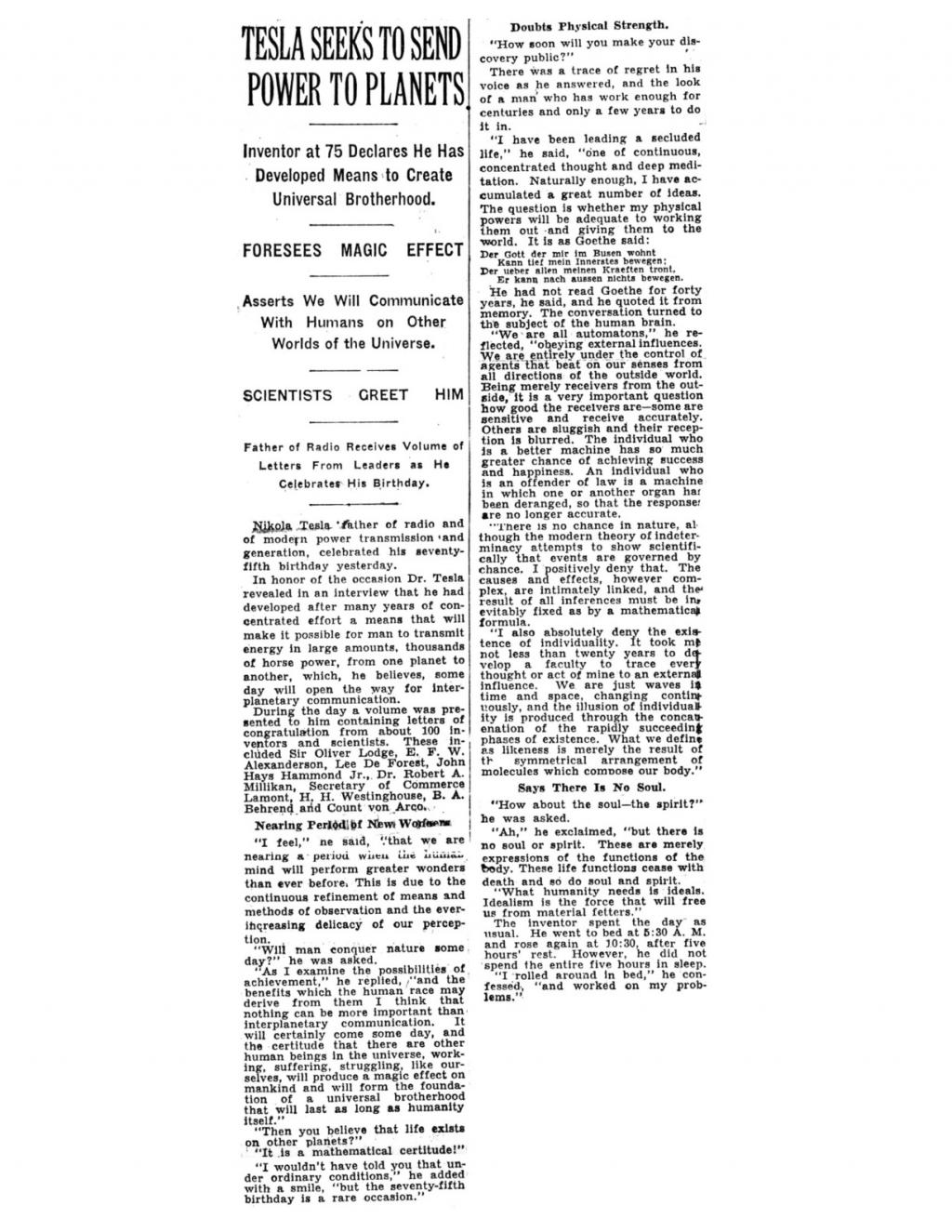