Do you use an alternating current induction motor? A high frequency coil? A filamentless vacuum lamp (such as the neon lamp)? asks H. Winfield Secor, E.E., in Science and Invention. Not only these but many other modern electrical methods and appliances are conceptions of the brain of Dr. Nikola Tesla.

For practically half a century Dr. Tesla has occupied himself with the roots and essences of his chosen subject. How essentially necessary to modern industry, offices and homes is alternating current! For most industrial requirements direct current is not suited at all. Long distance transmission of such a current is wasteful and impracticable, as no simple, efficient machinery is available for generating and transforming it at high voltages.

Alternating current, on the contrary, lend itself admirably to high voltage generation and to transformation into current of any strength or volume as well all into direct current, at the point of use... Without alternating current we could not proceed with modern life. Yet more than forty years ago Dr. Tesla discovered the principle of this form of electricity, invented machinery for generating and transforming it, and introduced it to a world which until then had been limping along with direct current as best it could.

Because Dr. Tesla knows the principles of electricity and has checked his knowledge in practice he is able to speak with certainty about electricity not only of today but also of tomorrow.

“Neon lamps are in the public favor and are being used for store windows and in signs quite extensively,” said Dr. Tesla, “but I had similar filamentless gas-filled electric lamps in my laboratory in Houston street over thirty years ago. I even had these lamps standardized to fifty candle power each, and used them instead of the orthodox illuminating devices. It seems that I was also far ahead of my time in the use of filamentless tubes, bent in the shapes of characters and other forms, as now extensively used. The light from properly filled vacuum tubes is of indescribable beauty, hygenic and more economical, and the lamps last forever. For these reasons I predict that very shortly the old-fashioned incandescent lamp, having a filament heated to brightness by the passage of electric current through it, will entirely disappear and that we will shortly be using new filamentless gas filled lamps in our homes, offices and factories throughout the world.

“The present day television inventors are on the wrong track, and we shall see in a future not distant a very simple means of transmitting the living daylight image over a wire or by wireless without the use of any scanning disk, soecuak synchronizing means and all the bewildering paraphernalia now employed to give an image the size of a postage stamp, and one that is far from satisfactory at that. I made discoveries many years ago which give me every reason to believe that television of the future will have all of the complicated parts located at the transmitting or central station, and all that the subscriber will have in his home or office to receive the reproduced image will he practically nothing but a screen, together with a suitable wave or station selector.” 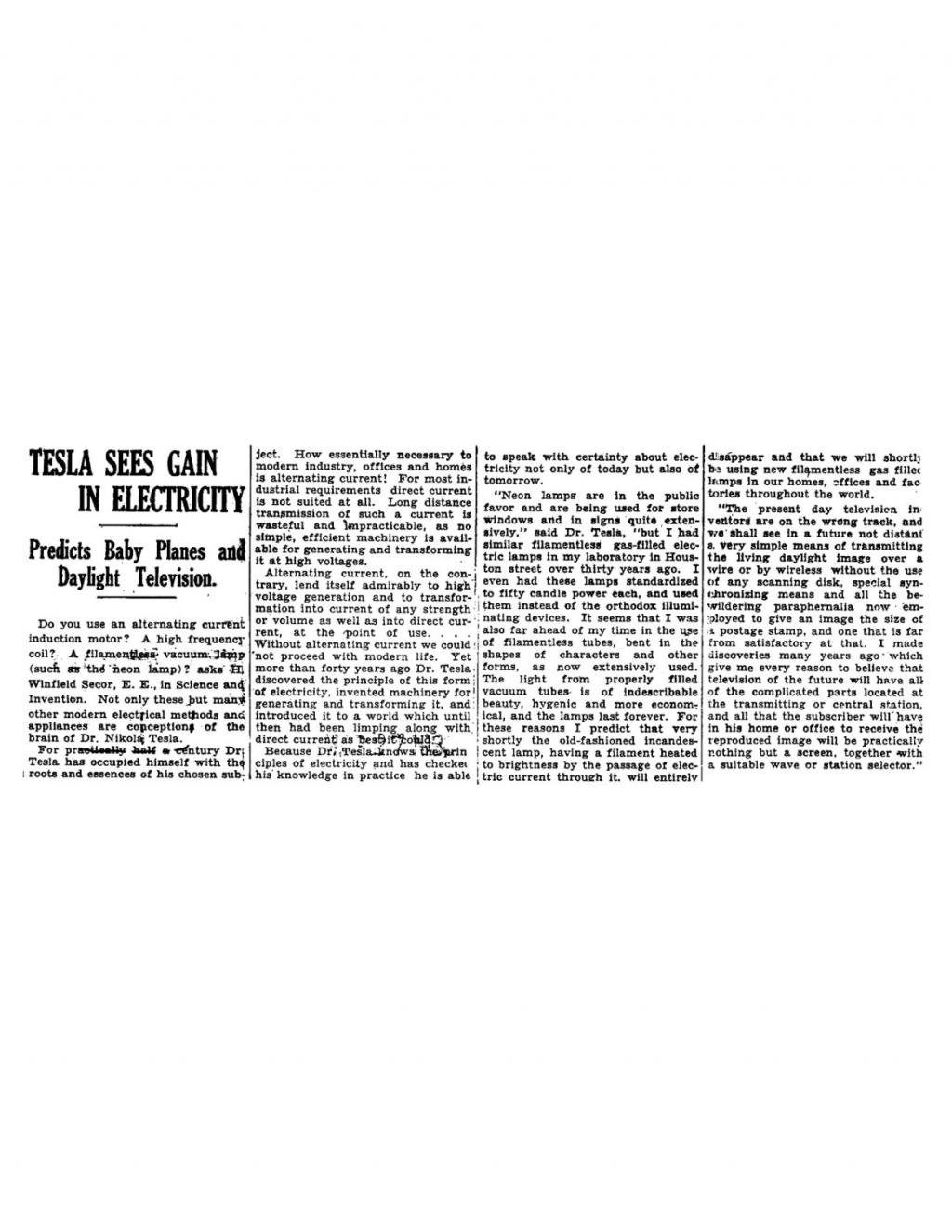