To the Editor of The World,

The World editorial March 28 must have instilled a holy fear in the minds of some of your readers. Of course Marconi could not help astounding people, but surely it was wrong of him at this critical time to scare the United States Navy by the statement that he could halt the progress of electrically driven dreadnoughts, which would mean certain doom in an engagement with the enemy. The thought that my beautiful induction motors used in their propulsion might be consigned to Davy Jones's locker in this easy manner caused me some anxiety until I satisfied myself by a little calculation that the maximum power transmitted — expressed in units more appropriate than the conventional — did not exceed one millionth of a “mousepower.”

Except to the layman there was nothing remarkable in the performance, considering that sea water has only one five-hundredths of the resistance of solid ground and that there were no towering objects in the vicinity thus reducing very much the size of the plant. Marconi accomplished nothing more than was known before. The infinitesimal currents received were amplified, relayed repeatedly and made to actuate local means, as usual. This can be brought about in more than one way; but as a rule, a form of amplifying three-electrode tube is employed which I described in my experimental lecture before the Franklin Institute and National Electric Light Association early in 1893. The modern tubes embodying the same principle are marvels of workmanship, but less sensitive, because they lend themselves only to relatively small voltages. If suitable means were provided, any wireless amateur could magnify as feeble a disturbance as the patter of the feet of a fly sufficiently to precipitate a veritable earthquake at the antipodes. The shrewd Italian did not give a description of his apparatus, but from his previous records one may safely infer that it is old and well known. It is gratifying, however, that he has abandoned the ridiculous arrangement of a “beam system,” which he claimed to offer “limitless possibilities.”

Your reference to his first announcement thirty years ago has stirred up in my memory unpleasant recollections. To the public the transmission of a weak wireless signal across the Atlantic appeared almost like a miracle, but, even if a fact, it was a paltry engineering achievement, for I had already shown by experiment over a year before that the earth may be excited like a wire of small dimensions and that the current impulse from a powerful transmitter could travel through it as much as a million miles before its energy was exhausted. But this is immaterial. I only wish to call the attention of your readers to the circumstances.

Some time after the experiments with the classical Hertz devices conducted under the auspices of the Imperial Post Office in England, Sir William Preece, then head of the department, wrote me a letter conveying the information that the test had been abandoned as of no value, but that he believed good results possible by my system. In reply I offered to prepare two sets for trial and asked him to give me the technical particulars necessary to the design. Just then Marconi came out with the emphatic assertion that he had tried out my apparatus and that it did not work. Evidently he succeeded in his purpose, for nothing was done in regard to my proposal.

He furthermore declared at a later date that wireless communication across the Atlantic was impossible because there was a wall of water several miles high between the two continents which rays could not traverse. But subsequent developments showed that he had used my system in secret all the time, received the plaudits of the world and accepted stolidly even my own congratulations, and it was only a long time after that he admitted it. 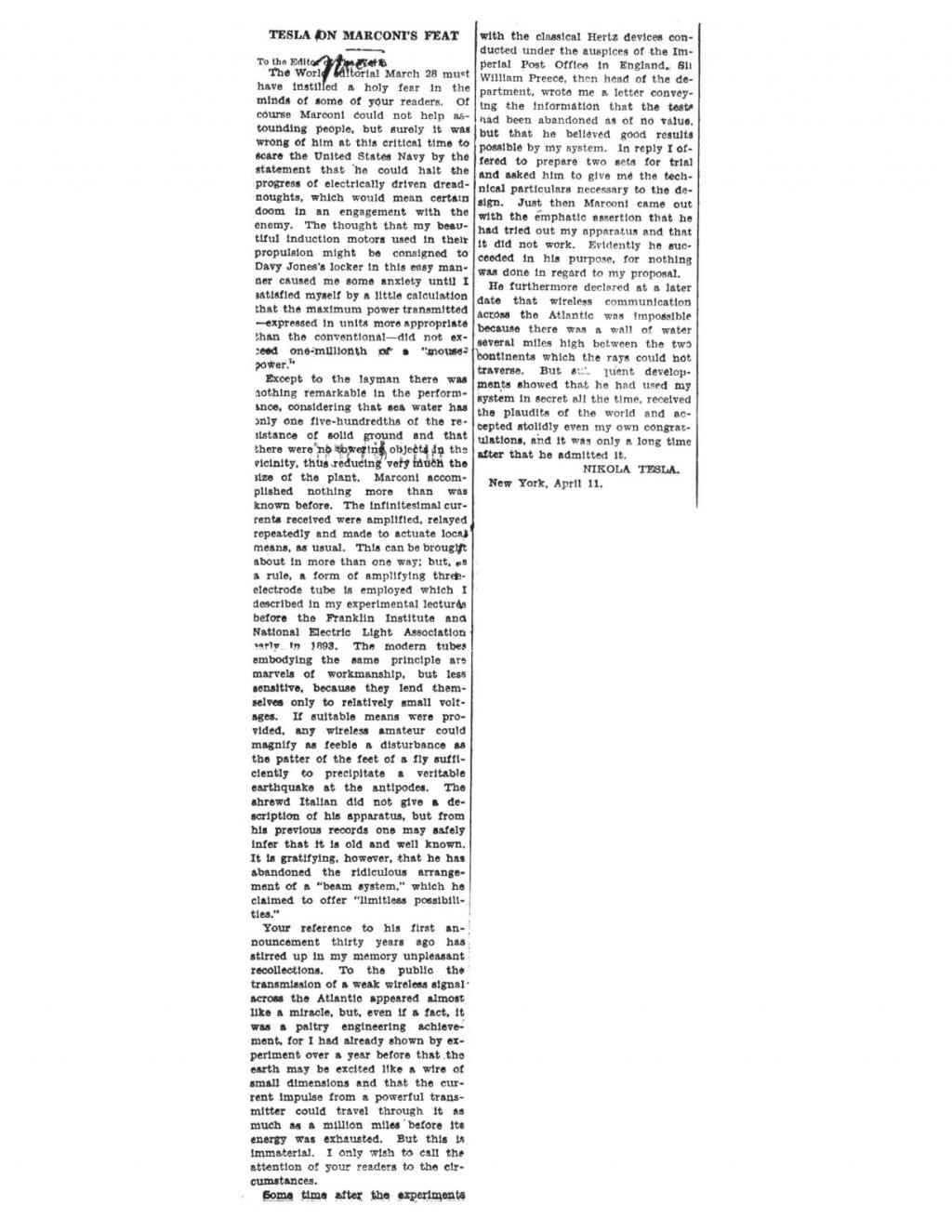