Here died on January 7, 1943, at the age of 87, the great Yugoslav-American Scientist-Inventor, Nikola Tesla, whose discoveries in the field of alternating electric current advanced the United States and the rest of the world into the modern industrial era.
- Yugoslav-American Bicentennial Committee, January 7, 1977

It has been a long trip, but this Plaque honoring the great electrical genius and humanist, Nikola Tesla, is now installed where it was first intended, his residence for the final ten years of his life - the Hotel New Yorker.

In these few moments, I would like to touch on two items of the story of Nikola Tesla and the Hotel New Yorker: my visit with him in his suite, and a brief history of the Plaque.

First, the visit. How is it that a young boy, myself, should have the opportunity to be ushered into the presence of such a famous and distinguished elderly man as Nikola Tesla. Simple. It was just a family matter. My grandmother was Tesla's sister, Angelina, and my father, Nikola Trbojevich (socially, Nicholas Terbo), was Tesla's nephew.

It was the 1930's tradition of our family to spend the summers at the New Jersey shore. The routine was for father, mother, my brother and I to motor from Detroit to the Cape May or Asbury Park. Father would stay for a week or two before returning to Detroit where he maintained offices as an inventor and consulting engineer. At the end of the summer, mother and I (my brother passed in 1937 at age 13) would return by train with a stopover of a week or so in either Washington or New York.

This particular year, probably 1938 or 1940 (kids are not so time specific) my mother and I were staying at the Taft Hotel with plans that day (I thought) to visit Radio City Music Hall. Imagine my surprise when, on the way to Radio City, my mother said “let's go see Uncle Nikola first.” I was less than enthusiastic because Radio City seemed much more exciting.

Mother and I went to his Hotel New Yorker room Number 3327, a two-room Suite, in mid morning. He was waiting for us. He addressed my mother and then turned to me, kissing and hugging me in greeting. (As an All-American boy, I was much more comfortable with just shaking hands). Besides saying “Hello” or some such, I seemed to be struck dumb. I may have, but I don't recall saying another word. Tesla was very tall and very old, while I was so small. Uncle Nikola and my mother talked for some time on family matters, perhaps on my brother’s recent death, and we left to Radio City.

A commemorative plaque honoring Nikola Tesla was unveiled at the Hotel New Yorker Ramada, 8- Avenue and 34-Street, at 7:00 pm Tuesday, July 10, 2001. The ceremony was hosted by the Hotel New Yorker, the Institute of Electrical and Electronics Engineers (IEEE) and the Tesla Memorial Society. William Terbo's remarks was one of the highlights of the ceremony.

On reflection in recent years, I've wondered about Tesla's famous idiosyncrasy concerning a phobia of germs. His habit of wiping silverware and shaking hands most reluctantly were items of constant press coverage. Hugging, kissing and patting the head of a ten-year-old boy seemed out of character. Perhaps this idiosyncrasy was merely an affectation used to tease the press.

History of the Plaque

Now, the Plaque. The Yugoslav-American Bicentennial Committee conducted many cultural events in connection with America's 200 hundredth birthday celebration including technical symposia and folk art and dance festivals. The Plaque was their gift intended for installation here at the Hotel on January 7, 1977, exactly 34 years after his passing. (You may remember that almost every country in the world gave a “birthday” gift to America in 1976. The official gift of the Yugoslav Government was the statue of Nikola Tesla that was installed overlooking Niagara Falls.)

For reasons that are not necessary to detail here, that installation did not take place in 1977. After the Bicentennial Committee concluded its work, the Plaque languished in the offices of the Yugoslav Counsel General until 1989. Through the fortuitous intervention of Dr. Milan Bulajic, a doctor of international law, Director of the Yugoslav Nikola Tesla Fund, a former Yugoslav Counsel General at New York - and having some specific business with the Executive Director of the Institute of Electrical and Electronics Engineers (IEEE), Mr. Eric Herz -proposed placing the Plaque at the United Engineering Center adjacent to United Nations Headquarters. The Center was the International Headquarters of the IEEE as well as several other Technical organizations.

This suggestion met with success and immediate action. Nikola Tesla holds a special place in the regard of the IEEE. He is one of twelve “apostles” of electric technology honored by the IEEE, joining such luminaries as Michael Faraday, Samuel F. B. Morse, Lord Kelvin, Thomas Edison and Alexander Graham Bell.

The Plaque was installed on the wall of the United Engineering Center Lobby Honor Court directly opposite a similar plaque honoring Alfred Nobel, the philanthropist who provided the initial funding for the construction of the Center. There it remained until redevelopment (Donald Trump style) caused the razing of the Center last year. The IEEE became custodian of the Plaque until it could be returned to its original intended location.

On behalf of the family of Nikola Tesla and the Tesla Memorial Society, Inc. I want to thank all those who have been involved supporting this particular honor for one of the great men of technology. A man who may have had the greatest impact on transforming human society into what we may call the “modern” age. I want to thank the Bicentennial Committee, Dr. Milan Bulajic, Mr. Eric Herz and the IEEE current General Manager Daniel J. Senese, the Hotel New Yorker and General Manager Mr. Barry S. Mann and Dr. Ljubo Vujovic, who organized this event.

Nikola Tesla's discoveries and inventions in electricity and radio are well known. His genius opened a path to a new world. He was a true pioneer. Many years ago an early American writer captured the thought this way: “Genius is the spirit of discovery. It gives wings to thought. It is always in advance of its time - a pioneer for the generations which it precedes.” Thank you. 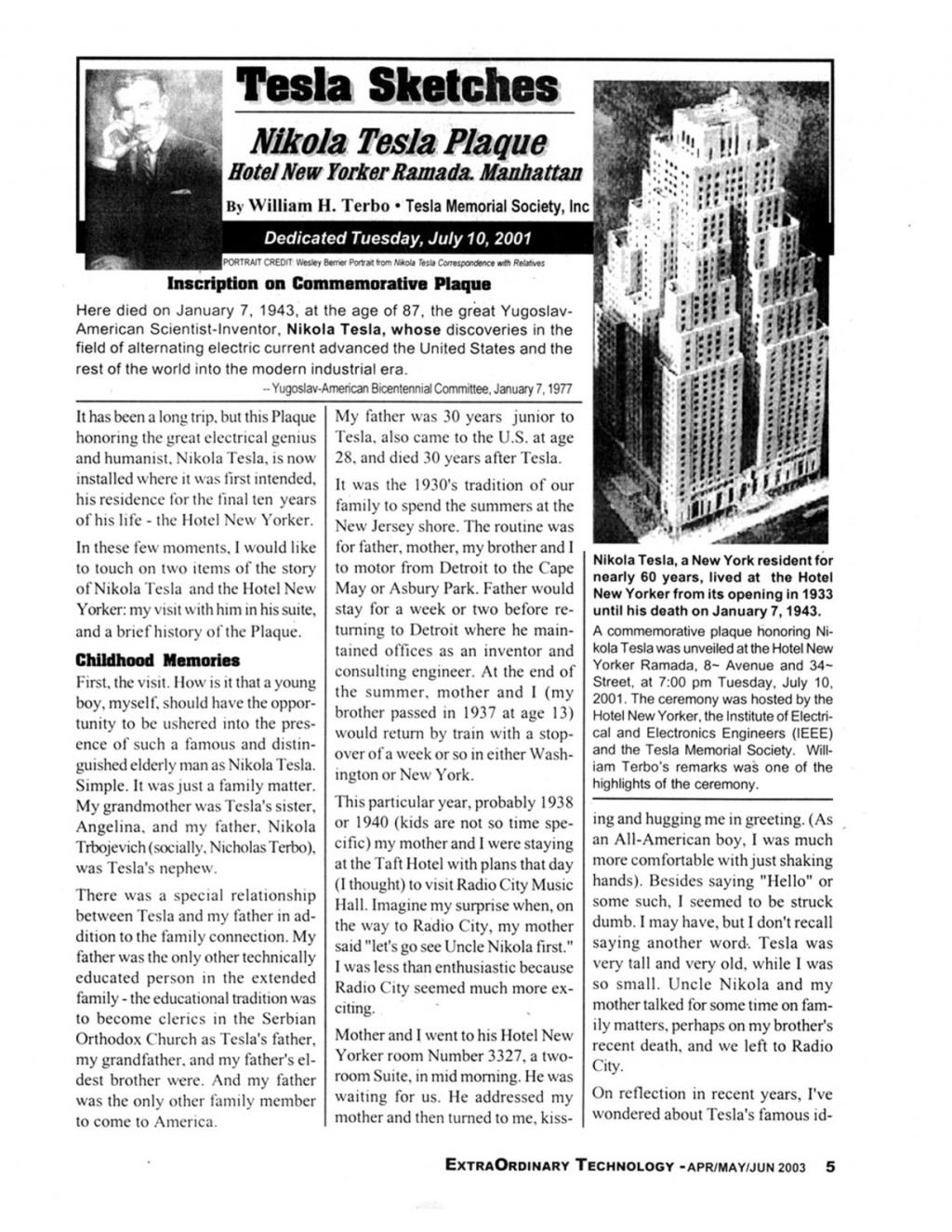