Tesla, Sure Life Exists on Other Planets, Works On at 76 to Establish His Belief

Nicola [sic] Tesla discussed communication between the earth and other planets today as if he regarded this as a feat no neater than telephoning to the cordial shop around the corner.

Tomorrow he will be 76. It will be forty-six years since he came, a shy, unheralded youth, from the Province of Lika, in Eastern Austria. But the fire of his tremendous endeavor seemed to burn as fiercely this morning as it has any time down the years in which he has established his prominent place among scientists.

Certain of Life Elsewhere.
“I am in dead earnest.” He spoke quietly and carefully. “I feel certain of what I tell you.

“The transmission of energy to another planet is only a matter of engineering. I have solved the problem so well I don’t regard it as doubtful.”

He is certain, too, he said, that there are creatures on other planets whose ways are like the ways of those on this one.

“It is mathematically certain that other planets are inhabited. Every other planet has to pass through practically the same phase of existence the earth did, and life is started on them, during that favorable phase, by rays of some sun.

“It develops in the presence of moisture and heat and light in much the same manner as life does on the earth.

Interplanetary Forum.
“We know that light propagates in straight lines, and consequently our perceptions of the forms through the images projected on the retina must be true.

“Therefore, it should not be hard to establish intelligent exchange of ideas between two planets.”

“It is conceivable that there is civilization on other planets far ahead of ours. If communication were established by the earth, the consequences to human beings would be incalculable.”

Busy in Laboratory.
He had been at work all day in his mid-town laboratory. Characteristically, he did not want to say much about it. As it always did, it concerns fundamentals; the application may come decades after his success in principle, as it has in radio and high-tension electricity.

“I’m giving all my time to annihilation of distance. Same as ever. To my mind that’s the most important achievement to be hoped for in the furtherance of the intellectual development of man, as well as in the promotion of his material welfare.

Radio Just a Step.
“The wireless art already fulfills this in a large measure, but we must establish transmission of power in all its innumerable applications.

“This has been my life work and I hope to see its full fruition before I am gathered to my forefathers.”

Spruce and slim, with cane and gloves and a tailored air, he did not look 50 as he rose and stood by a desk on the mezzanine floor of the hotel where, a recluse among millions, he takes cover.

Longs for His Wine.
About him there was none of the traditional coldness of the pure scientist. He felt, he said like a boy.

Why? Well, no coffee and no tea, for one thing. Another, he has never been married. He would be even more fit, he thinks, if they had not taken his wine away. 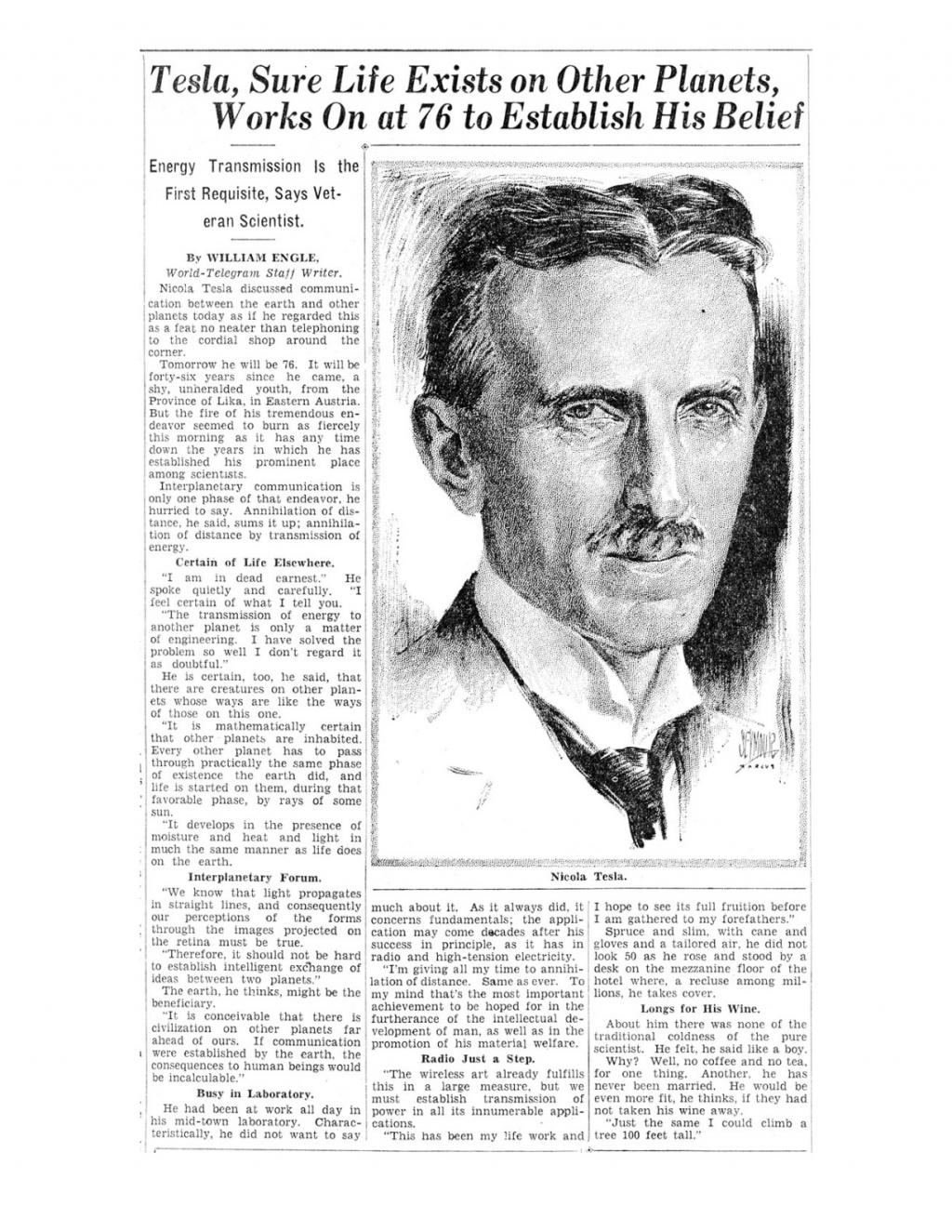