Nikola Tesla and the Discovery of X-rays

Introduction
Every radiologist is aware of Nikola Tesla’s research in the field of electromagnetism.The International System (SI) unit of magnetic flux density, the Teslacon magnetic resonance imager (Technicare, Solon, Ohio), and Teslascan manganese contrast agent (GE Healthcare, Waukesha, Wis) were all named after him. Without his other inventions like the alternating current supply, Tesla-Knott generator, and fluorescent lights in view boxes, it is impossible to even imagine a workday in a contemporary radiology department (1). But if the discovery of x-rays is mentioned, only a few radiologists associate it with Tesla’s name.

Early Days
Nikola Tesla (Fig 1) was born in 1856 in the small village of Smiljan, Croatia. After finishing high school in Croatia, he continued his education in engineering in Graz, Austria, until 1878. Four years later he moved to Paris, France, and started working for the Continental Edison Company. In 1884 he emigrated to the United States, where he first began to work with Thomas Edison but soon afterward formed his own Tesla Corporation as competition to Edison’s company. He patented about 300 inventions worldwide, many of which are still famous today. However, Tesla’s experiments with “shadowgraphs” and his observations of the biologic effects of x-rays are not well known, even among radiologists.

A Mysterious Discovery
Tesla reported that, driven by his observation of mysterious damage to photographic plates in his laboratory, he began his investigation of x-rays (at that time still unknown and unnamed) in 1894 (2). Apart from experiments using the Crookes tube, he invented his own vacuum tube (Fig 2), which was a special unipolar x-ray bulb. It consisted of a single electrode that emitted electrons. There was no target electrode; therefore, electrons were accelerated by peaks of the electrical field produced by the high-voltage Tesla coil. Even then,Tesla realized that the source of x-rays was the site of the first impact of the “cathodic stream” within the bulb (4), which was either the anode in a bipolar tube or the glass wall in the unipolar tube he invented. Nowadays, this form of radiation is known as Bremsstrahlung or braking radiation. In the same article, he stated that the cathodic stream was composed of very small particles (ie, electrons). His idea that the produced rays were minute particles (5) wasn’t wrong at all; many years later, physicists described particle properties of electromagnetic radiation quanta called photons.To avoid heating and melting of the glass wall of his x-ray bulb, Tesla designed a cooling system based on a cold blast of air along the tube, as well as on today’s widely accepted oil bath surrounding the tube (6).

First X-ray Images
It also seems that he produced the first x-ray image in the United States when he attempted to obtain an image of Mark Twain with the vacuum tube. Surprisingly, instead of showing Twain, the resulting image showed the screw for adjusting the camera lens (7). Later, Tesla managed to obtain images of the human body, which he called shadowgraphs (Fig 3). Tesla sent his images to Wilhelm Conrad Roentgen shortly after Roentgen published his discovery on November 8, 1895. Although Tesla gave Roentgen full credit for the finding, Roentgen congratulated Tesla on his sophisticated images, wondering how he had achieved such impressive results (Fig 4) (7). Moreover, Tesla described some clinical benefits of x-rays — for example, determination of foreign body position and detection of lung diseases (8) — noting that denser bodies were more opaque to the rays (9).

Further X-ray Investigations
Tesla also experimented with reflected x-rays, using different materials as reflecting surfaces and describing features of transmitted and reflected rays (3,5,10). He thought that the practical purpose of the reflected x-rays was to improve the quality of the shadowgraph by increasing the object-film distance and decreasing exposure time. He was disappointed upon observing that lenses caused no refraction of x-rays (3). Later, it came to be understood that x-rays cannot be refracted by optical lenses due to their high frequency. However, Max von Laue managed to deviate x-rays using crystal lenses in 1912 (11). Tesla explained changes in x-ray characteristics as being caused by variations in x-ray tubes and electrical generators (12). He correctly realized that strong shadows can be produced only at great object-film distances and with short exposure times (5). Moreover, he perceived that bulbs with thick walls produced rays with greater penetrating power (8), which was later explained by the longer deceleration of electrons on the thicker barrier.

Tesla was also among the first to comment on the biologic hazards of working with unipolar x-ray tubes, attributing the harmful effects on the skin to the ozone and the nitrous acid generated by the rays, rather than to the ionizing effects of the radiation (8,13). He described acute skin changes like redness, pain, and swelling, as well as late consequences such as hair loss and new nail growth. He compared sudden pain and irritation of the eyes while working with x-rays to the experience of stepping from a dark room into bright sunlight (5,8). This pain and irritation was considered to be the consequence of eyestrain due to long-lasting observation of the fluorescent screen in darkness. Tesla understood the three main elements of radiation protection: distance, time, and shielding. He discovered that adequate distance from the x-ray source was a useful safety factor. Instead of explaining the sudden diminution of the harmful effects of radiation on the basis of the inverse square law, however, he attributed it to lower ozone concentrations (14). Tesla advised people working at very short distances from the tube (eg, surgeons) to shorten the exposure time to a maximum of 2–3 minutes (15). He also tried to construct a protective shield made of aluminum wires connected to the ground.

An Unfortunate Turn
The main reason why Tesla’s contribution to the discovery of x-rays hasn’t become better known is that much of his work was lost when his laboratory in New York burnt down on March 13, 1895 (16). Nevertheless, there are many testimonies confirming his legacy of the invention of x-rays. Starting on March 11, 1896 (12), Tesla published a series of articles on the topic of x-rays and their biologic hazards in Electrical Review, New York. Few secrets were unveiled when he gave a lecture before the New York Academy of Sciences in 1897 (2), in which he validated to some degree his primacy in x-ray research. He confirmed publicly that he had been conducting independent research on this topic since 1894, which had unfortunately been interrupted by the fire in his laboratory. He also expressed regret at realizing too late that, despite being prompted by his “guiding spirit,” he had failed to comprehend its mysterious signs…

Nikola Tesla died in 1943 in New York. We will never know who would have gotten the Nobel prize for the discovery of x-rays had Tesla’s work not been lost together with his New York laboratory. The least we can do is appreciate Tesla’s pioneer work in the invention and application of x-rays. 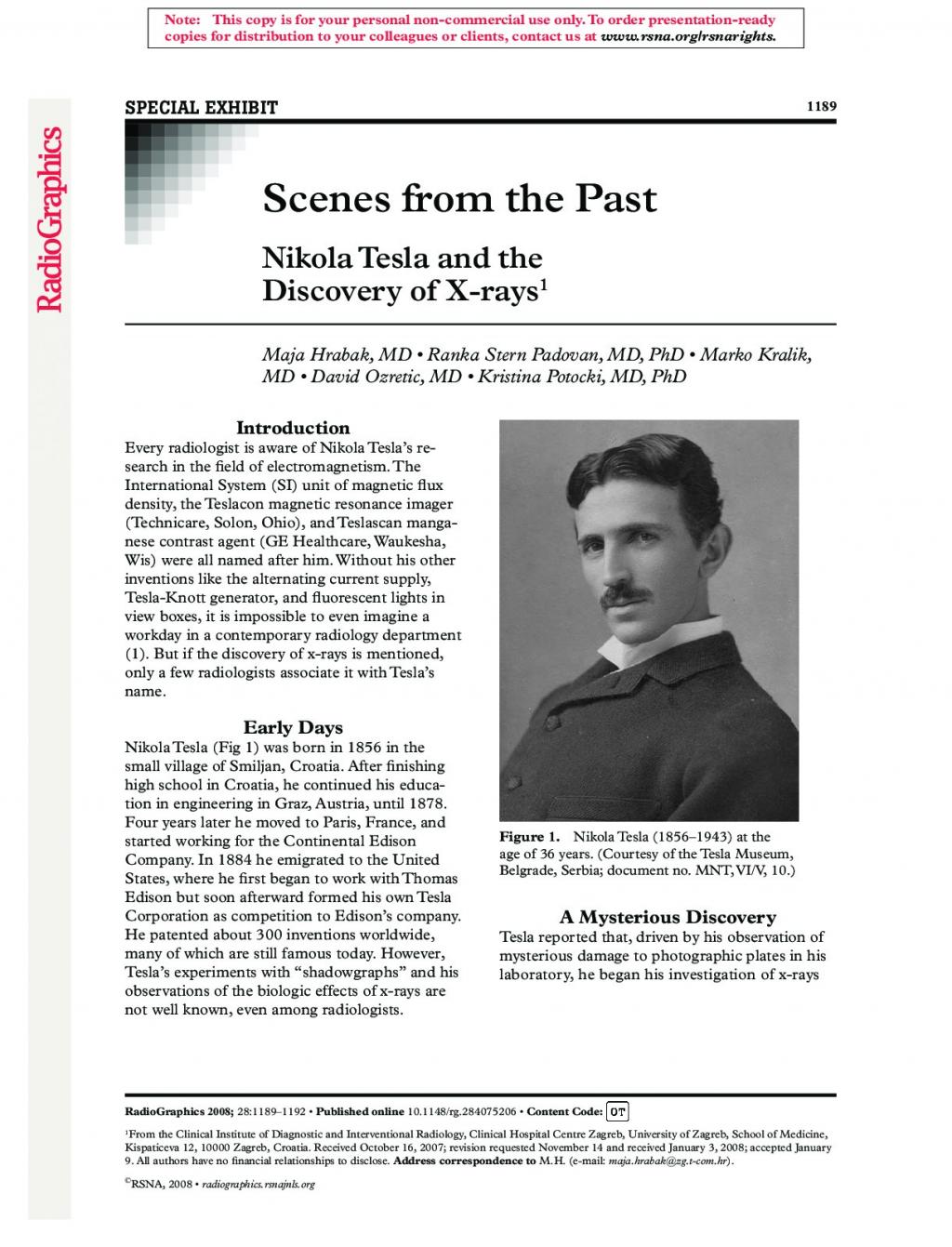