Engineers and men of science throughout the world are awaiting with unusual interest the completion of tests of a new steam turbine designed by Nikola Tesla, which preliminary experiments indicate will give enormous power from a comparatively small and extremely lightweight engine. Ten horsepower to a pound of weight has already been developed with the engines that have been tested and enthusiasts who have witnessed the work of the turbine declare the perfect rotor has at last been found. To what extent this is true, time and the construction of larger units than have yet been used must prove. At present, while the practical experimental stage has not yet been passed, the entire engineering world is profoundly interested in the work that has been done, and awaits future development with much concern.

Operation of the Tesla engine depends upon two well-known properties of fluids: adhesion — the tendency, for example, of a certain amount of water to cling to a smooth metal surface, even when the bulk of the water has been shaken off; and viscosity, the resistance of fluids to molecular separation, the tendency of one drop, in a mass of fluid, to drag adjoining drops with it, if set in motion.

In its simplest form, the new idea takes the shape of the inventor’s little “air-diffuser.” This consists of half a dozen very thin steel disks, some 9 or 10 in. in diameter, set horizontally, about 1/8 in. apart, on the upright shaft of a small, horizontal electric motor, the center of each disk being cut away in a 3-in. circle. With current switched into the motor, the disks revolve, and instantly strong suction can be felt by the hand held several inches above the axis, while a powerful current of air is blown from the spaces between the disks. The air, in short, is being sucked into the central opening and hurled out at the periphery. Consider now that disks and shaft have been inclosed in an air-tight case, with an inlet at the axis and an outlet at one point of the periphery; we have an air pump, a Tesla blower, one of which, now in operation, is delivering 10,000 cu. ft. of air per minute. Suppose again that water, instead of air, be the fluid admitted. Entering the cut-away space at the centers of the disks, the adhesion of the metal drags it, in a widening spiral, toward the spinning circumferences, there to hurl it away in a tangential direction; and since the water must now leave the case by its one outlet, we have the Tesla pump, on rather new lines.

Assume that the pumping process is to be reversed, that the disks, instead of being turned by an outside force, are to produce power themselves, that steam under pressure has been substituted for the water. The steam, admitted to the case, strikes the edges of the disks and takes the path of least resistance between them, a narrowing spiral toward the outlet through their centers. The disks themselves are dragged around, the shaft is turned and power is being generated in an entirely new fashion.

Working under the best conditions — in the experimental laboratory — a single disk of 9 3/4 in. diameter, with a center outlet of 3 5/8 in., will develop 5 hp. Without nearly approaching the limit of strain of the materials, the pressure could be increased so that the velocity of rotation would be doubled and the power quadrupled; so that with a single steel plate, 1/32 in. in thickness, weighing about 3/8 lb., and delivering 20 hp., we have a possible 53 hp. to 1 lb. of actually working material. Or a more concrete example can be found in a double Tesla turbine, built for practical service and nearly completed. In this there are two sets of disks, arranged to revolve in opposite directions and each set developing 200 hp.

Comparison between the old and the newest is best given in the inventor’s own words:

“In most engines, a very small proportion of the total amount of material is actively employed in the production of power. For example, in reciprocating engines of the older type, the power-giving portion — cylinder, piston, etc. — was no more than a fraction of 1 per cent of the total weight of material used in construction. The present form of turbine, with an efficiency of about 62 per cent was a great advance, but even in this form of machine scarcely more than 1 per cent or 2 per cent is used in actually generating power at a given moment. The new turbine offers a striking contrast, using as it does practically the entire material of the rotor (the whole surfaces of the disks) as an active source of power, and with an efficiency of 80 per cent or even 90 per cent. Owing to this, it is possible to get an enormous amount of power from a small space. Assuming sufficient boiler capacity on a vessel such as the “Mauretania,” it would be perfectly easy to develop, instead of some 70,000 hp., 4,000,000 hp. in the same space — and this is a conservative statement.” 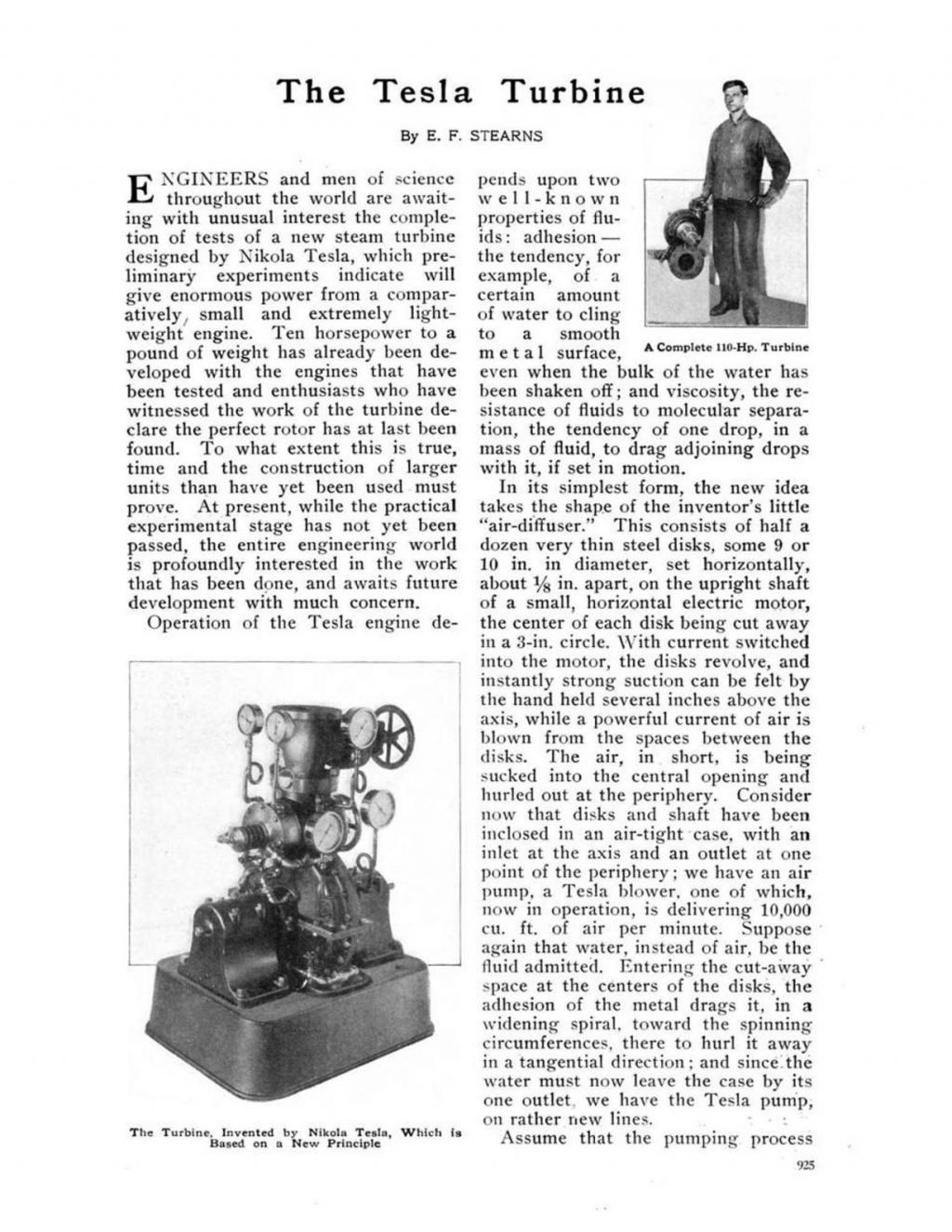