When Heinrich Hertz announced the results of his famous experiments in confirmation of the Maxwellian electromagnetic theory of light, the scientific mind at once leaped to the conclusion that the newly discovered dark rays might be used as a means for transmitting intelligible messages through space. It was an obvious inference, for heliography, or signaling by beams of light, was a well recognized wireless art. There was no departure in principle, but the actual demonstration of a cherished scientific idea surrounded the novel suggestion with a nimbus of originality and atmosphere of potent achievement. I also caught the fire of enthusiasm but was not long deceived in regard to the practical possibilities of this method of conveying intelligence.

Granted even that all difficulties were successfully overcome, the field of application was manifestly circumscribed. Heliographic signals had been flashed to a distance of 200 miles, but to produce Hertzian rays of such penetrating power as those of light appeared next to impossible, the frequencies obtainable through electrical discharges being necessarily of a much lower order. The rectilinear propagation would limit the action on the receiver to the extent of the horizon and entail interference of obstacles in a straight line joining the stations. The transmission would be subject to the caprices of the air and, chief of all drawbacks, the intensity of disturbances of this character would rapidly diminish with distance.

But a few tests with apparatus, far ahead of the art of that time, satisfied me that the solution lay in a different direction, and after a careful study of the problem I evolved a new plan which was fully described in my addresses before the Franklin Institute and National Electric Light Association in February and March, 1893. It was an extension of the transmission through a single wire without return, the practicability of which I had already demonstrated. If my ideas were rational, distance was of no consequence and energy could be conveyed from one to any point of the globe, and in any desired amount. The task was begun under the inspiration of these great possibilities.

While scientific investigation had laid bare all the essential facts relating to Hertz-wave telegraphy, little knowledge was available bearing on the system proposed by me. The very first requirement, of course, was the production of powerful electrical vibrations. To impart these to the earth in an efficient manner, to construct proper receiving apparatus, and develop other technical details could be confidently undertaken. But the all important question was, how would the planet be affected by the oscillations impressed upon it? Would not the capacity of the terrestrial system, composed of the earth and its conducting envelope, be too great? As to this, the theoretical prospect was for a long time discouraging. I found that currents of high frequency and potential, such as had to be necessarily employed for the purpose, passed freely through air moderately rarefied. Judging from these experiences, the dielectric stratum separating the two conducting spherical surfaces could be scarcely more than 20 kilometers thick and, consequently, the capacity would be over 220,000 microfarads, altogether too great to permit economic transmission of power to distances of commercial importance. Another observation was that these currents cause considerable loss of energy in the air around the wire. That such waste might also occur in the earth’s atmosphere was but a logical inference.

A number of years passed in efforts to improve the apparatus and to study the electrical phenomena produced. Finally my labors were rewarded and the truth was positively established; the globe did not act like a conductor of immense capacity and the loss of energy, due to absorption in the air, was insignificant. The exact mode of propagation of the currents from the source and the laws governing the electrical movement had still to be ascertained. Until this was accomplished the new art could not be placed on the plane of scientific engineering. One could bridge the greatest distance by sheer force, there being virtually no limit to the intensity of the vibrations developed by such a transmitter, but the installment of economic plants and the predetermination of the effects, as required in most practical applications, would be impossible.

Such was the state of things in 1899 when I discovered a new difficulty which I had never thought of before. It was an obstacle which could not be overcome by any improvement devised by man and of such nature as to fill me with apprehension that transmission of power without wires might never be quite practicable. I think it useful, in the present phase of development, to acquaint the profession with my investigations.

It is a well know fact that the action on a wireless receiver is appreciably weaker during the day than at night and this is attributed to the effect of sunlight on the elevated aerials, an explanation naturally suggested through an early observation of Heinrich Hertz. Another theory, ingenious but rather fine-spun, is that some of the energy of the waves is absorbed by ions or electrons, freed in sunlight and caused to move in the direction of propagation. The Electrical Review and Western Electrician of June 1, 1912, contains a report of a test, during the recent solar eclipse, between the station of the Royal Dock Yard in Copenhagen and the Blaavandshuk station on the coast of Jutland, in which it was demonstrated that the signals in that region became more distinct and reliable when the sunlight was partially cut off by the moon. The object of this communication is to show that in all the instances reported the weakening of the impulses was due to an entirely different cause.

It is indispensable to first dispel a few errors under which electricians have labored for years, owing to the tremendous momentum imparted to the scientific mind through the work of Hertz which has hampered independent thought and experiment. To facilitate understanding, attention is called to the annexed diagrams in which Fig. 1 and Fig. 2 represent, respectively, the well known arrangements of circuits in the Hertz-wave system and my own. In the former the transmitting and receiving conductors are separated from the ground through spark gaps, choking coils, and high resistances. This is necessary, as a ground connection greatly reduces the intensity of the radiation by cutting off half of the oscillator and also by increasing the length of the waves from 40 to 100 percent, according to the distribution of capacity and inductance. In the system devised by me a connection to earth, either directly or through a condenser is essential. The receiver, in the first case, is affected only by rays transmitted through the air, conduction being excluded; in the latter instance there is no appreciable radiation and the receiver is energized through the earth while an equivalent electrical displacement occurs in the atmosphere.

Now, an error which should be the focus of investigation for experts is, that in the arrangement shown in Fig. 1 the Hertzian effect has been gradually reduced through the lowering of frequency, so as to be negligible when the usual wavelengths are employed. That the energy is transmitted chiefly, if not wholly, by conduction can be demonstrated in a number of ways. One is to replace the vertical transmitting wire by a horizontal one of the same effective capacity, when it will be found that the action on the receiver is as before. Another evidence is afforded by quantitative measurement which proves that the energy received does not diminish with the square of the distance, as it should, since the Hertzian radiation propagates in a hemisphere. One more experiment in support of this view may be suggested. When transmission through the ground is prevented or impeded, as by severing the connection or otherwise, the receiver fails to respond, at least when the distance is considerable. The plain fact is that the Hertz waves emitted from the aerial are just as much of a loss of power as the short radiations of heat due to frictional waste in the wire. It has been contended that radiation and conduction might both be utilized in actuating the receiver, but this view is untenable in the light of my discovery of the wonderful law governing the movement of electricity through the globe, which may be conveniently expressed by the statement that the projection of the wave-lengths (measured along the surface) on the earth’s diameter or axis of symmetry of movement are all equal. Since the surfaces of the zones so defined are the same the law can also be expressed by stating that the current sweeps in equal times over equal terrestrial areas. (See among others “Handbook of Wireless Telegraph,” by James Erskine-Murray.) Thus the velocity propagation through the superficial layers is variable, dependent on the distance from the transmitter, the mean value being n/2 times the velocity of light, while the ideal flow along the axis of propagation takes place with a speed of approximately 300,000 kilometers per second.

To illustrate, the current from a transmitter situated at the Atlantic Coast will traverse that ocean — a distance of 4,800 kilometers — in less than 0.006 second with an average speed of 800,000 kilometers. If the signaling were done by Hertz waves the time required would be 0.016 second.

Bearing, then, in mind, that the receiver is operated simply by currents conducted along the earth as through a wire, energy radiated playing no part, it will be at once evident that the weakening of the impulses could not be due to any changes in the air, making it turbid or conductive, but should be traced to an effect interfering with the transmission of the current through the superficial layers of the globe. The solar radiations are the primary cause, that is true, not those of light, but of heat. The loss of energy, I have found, is due to the evaporation of the water on that side of the earth which is turned toward the sun, the conducting particles carrying off more or less of the electrical charges imparted to the ground. This subject has been investigated by me for a number of years and on some future occasion I propose to dwell on it more extensively. At present it may be sufficient, for the guidance of experts, to state that the waste of energy is proportional to the product of the square of the electric density induced by the transmitter at the earth’s surface and the frequency of the currents. Expressed in this manner it may not appear of very great practical significance. But remembering that the surface density increases with the frequency it may also be stated that the loss is proportional to the cube of the frequency. With waves 300 meters in length economic transmission of energy is out of the question, the loss being too great. When using wave-lengths of 6,000 meters it is still noticeable though not a serious drawback. With wave-lengths of 12,000 meters it becomes quite insignificant and on this fortunate fact rests the future of wireless transmission of energy.

To assist investigation of this interesting and important subject, Fig. 3 has been added, showing the earth in the position of summer solstice with the transmitter just emerging from the shadow. Observation will bring out the fact that the weakening is not noticeable until the aerials have reached a position, with reference to the sun, in which the evaporation of the water is distinctly more rapid. The maximum will not be exactly when the angle of incidence of the suns rays is greatest, but some time after. It is noteworthy that the experimenters who watched the effect of the recent eclipse, above referred to, have observed the delay. 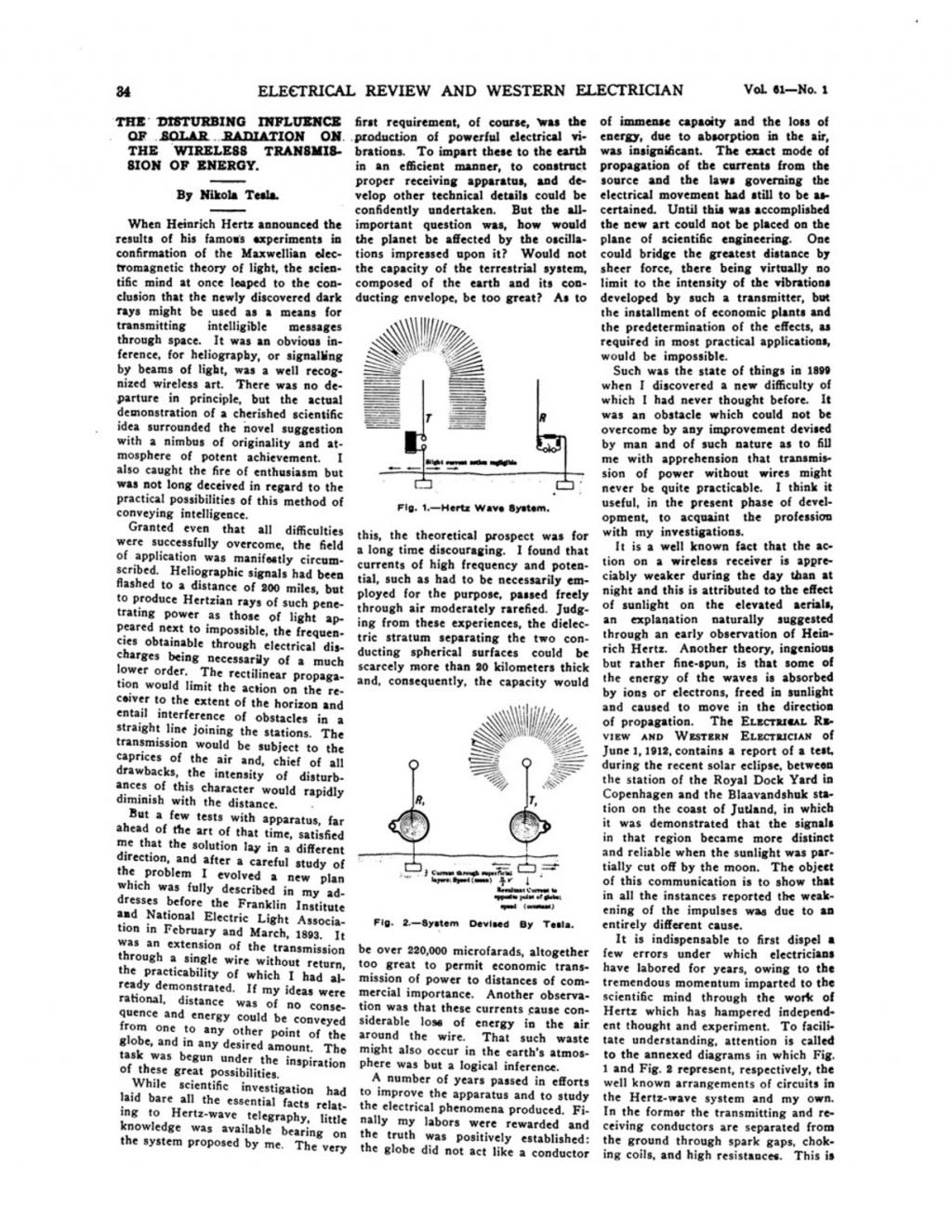