Near Shoreham, on Long Island, stands a great lattice-work tower nearly two hundred feet high, with a copper mushroom for a top. This is Nikola Tesla’s great electric tower, whose purposes have never been accurately known. He has asserted that he was prepared to send electric signals by actually increasing and diminishing the electric charge of the earth, and the tower has been generally connected with this assertion. The tower and the laboratory with it, tho representing a large outlay, have remained idle for years. Of late there have been rumors that some use, either practical or experimental, was to be made of the plant, and one or two journals have published articles filled with somewhat fantastic predictions, seemingly divorced from clear explanation. On the other hand, Export American-Industries (New York, March) calls the plant “Tesla’s Million-Dollar Folly.” Under this head it says:

“If you consult ‘Who’s Who in America’ you will find the following paragraph — ‘Tesla, Nikola, electrician, b. Smiljan, Lika (border country of Austria-Hungary), 1857: s. of Greek clergyman and orator and of Georgina Mandic, who was an inventor, as was her father.’ There follows a long and impressive list of his discoveries and accomplishments, hardly intelligible to the average reader unversed in the mysteries of electricity. To the world he is best known as the discoverer of the alternating-current system and as the man who harnessed Niagara Falls. 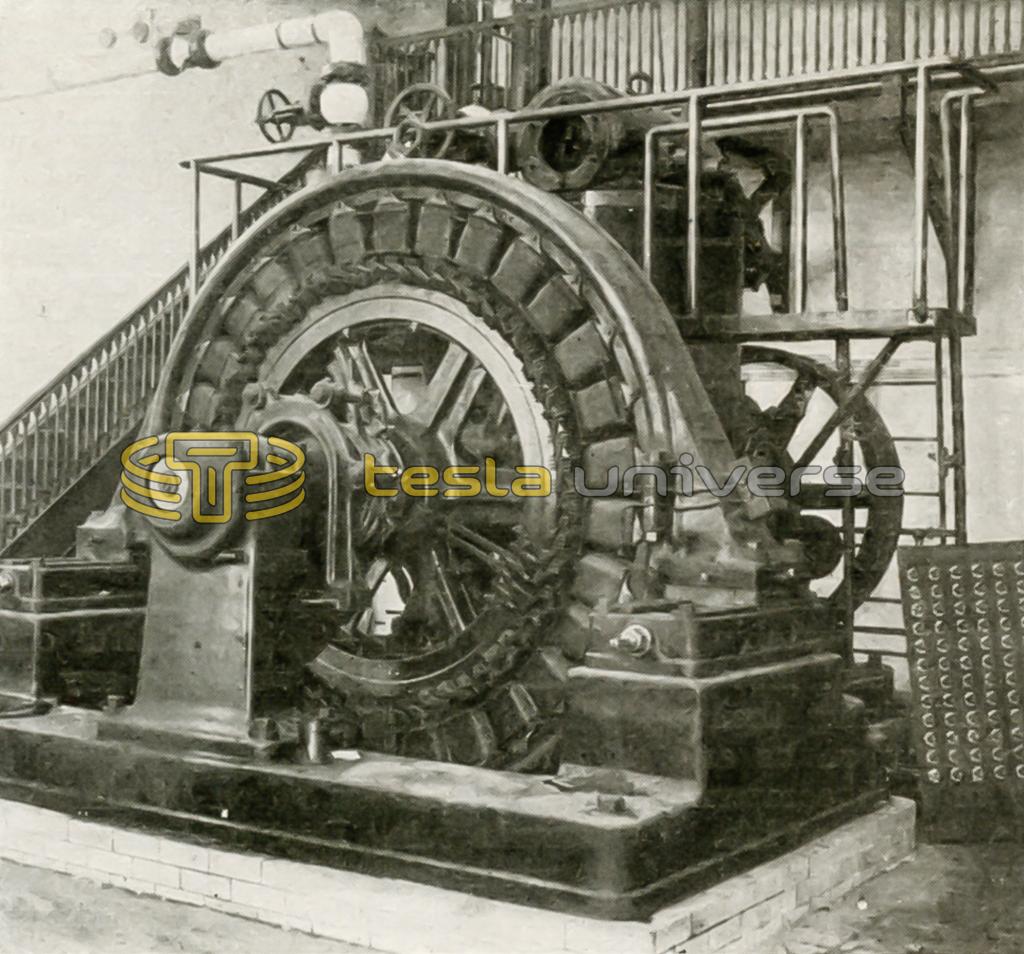 “Like all geniuses, he is a dreamer and a spender. His dreams have been so real to him that he has persuaded investors to back him in many enterprises. The greatest monument to his unfinished dreams is his immense laboratory at Shoreham, L. I. Fifteen years ago he was given a large tract of land in the town then called Wardenclyffe. A local builder hastened to erect houses for the workmen that came from the city, and the town felt that great prosperity was ahead of it. A huge brick building was finished, and above it a steel tower capped by a copper dome 185 feet above the ground. Workmen reported that pipes had been sunk in the earth to almost an equal number of feet. Carefully crated machinery arrived by train and was installed in the brick laboratory, and a group of silent workmen worked day by day.

“The purpose behind all this investment and energy was a mystery to the town. Gradually, whispers were heard — ‘He intends to furnish power for New York City’; ‘He will electrify the railroads of Long Island’; ‘The tower can be seen from the Connecticut shore; it will be a signal-station from whose copper dome messages will be flashed,’ etc. No one that knew would say whether the whispers contained a germ of truth, and gradually the wonder grew less and the mystery in their midst became an old story. A couple of years passed by and no wonderful results came. Evidently the dream was proving difficult to materialize. Suddenly, almost in a night, the inventor and his workmen departed. For a time a watchman patrolled the grounds; then he too went to other fields, leaving the sleeping plant to take care of itself. It has had a long nap in the sleepy town some sixty odd miles from New York City. Adventuresome boys used to climb the steps of the tower until they became so rotten as to make them unsafe. One day they discovered a loosened window-catch and made their way inside the laboratory. There everything seemed left as for a day — chairs, desks, and papers in businesslike array. The great wheels seemed only awaiting Monday life. But the magic word has not been spoken, and the spell still rests on the great plant. It is reported that the books and papers have been taken away, but otherwise the place is the same as when left some dozen years ago. Its existence has almost passed from the minds of men — even the general passenger-agent of the railroad, whose tiny station is within three minutes of the laboratory, did not know of the million-dollar failure. There are rumors that another dream of the famous electrician is soon to assume reality. Then, perhaps, the dead will come to life and the monument become the Mekka of admiring scientists.” 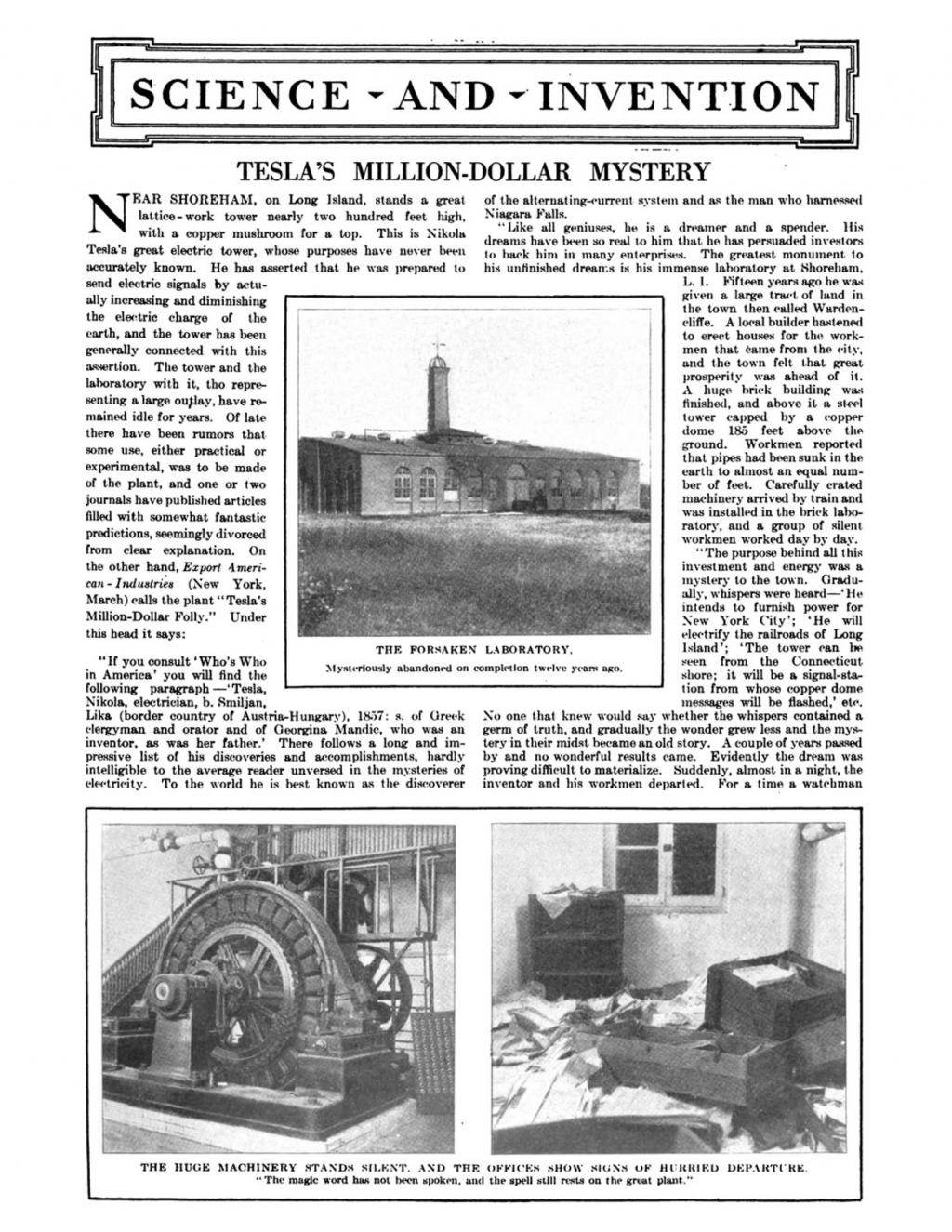