Letters to the Editor.

To the Editor of “Industries.”

Sir, - In your issue of the 10th October I find an article relating to some remarks made by me in other journals. You say “it is perhaps an oversight” on my part that I have not forwarded you an advanced proof of my remarks.

I admit the justice of this remark, and beg you to accept my apology. But while I do this I must say that I do not agree with some of your statements. You still misunderstand me on some points about the motor which you have made the subject of your criticism. Is it because my explanations and views are “eccentric,” or perhaps even unsound?

In the motor you refer to, the four coils are wrapped transversely with the fine iron wire - that is, the axis of the wire is parallel with the lines of force or induction set up by the current through the coils. This arrangement was referred to by me as a closed magnetic circuit, and is so for all practical purposes.

My statement was that on the start, and as long as the current through the coils has a small value, the few lines set up close through the iron wire, and thus the two effects mentioned by me are brought about, namely, the current through the coils is retarded, and the appearance of the free poles delayed. I believe that it is proper to say that, in this case, the “screening” is effected “magnetically,” since the formation of the secondary currents in the “screen” is reduced as far as practicable.

You seem to overlook that in advancing the views in question I have, as far as my recollection goes, nowhere stated that the “screening” might not be due to Foucault currents, which are formed no matter how finely the core may be subdivided. Whatever was said referred to the fact observed, and not to what may have caused it. If I observe that the outside of a core is magnetised first, I think that I should be allowed to say in a popular way that the magnetic action affects the outside first and progresses towards the interior.

As to the Foucault currents being concerned in the phenomena I had, obviously, views similar to your own. In exploring the field of a motor by means of a rotating disc, I have several times observed what one might call “magnetic eddies.” In some places within the field the disc would rotate in the proper direction, in other places - the axis of the disc being always parallel with the axis of the armature of the motor - it would not rotate, or it would even rotate in the opposite direction, though with less force in other places of the field. Yet the cores were well laminated, and the field coils properly connected.

I explained this by assuming that, on the start of the current through the coils, secondary currents are formed throughout the cores. These currents in each core might be replaced by a single current sheet somewhere beneath the surface. The space between this current sheet and the surface of the core would then be magnetised jointly by the primary and secondary currents, whereas the centre is demagnetised by the secondary. As there is a difference of phase besides, it occurs sometimes that the centre acquires a polarity opposite to that which would be imparted to it by the primary current. The core may then be thought to consist of two independent parts, and these phenomena of rotation occur.

Motors were constructed by me on this and similar plans. The only trouble with this view is that I have observed these and other phenomena with well-laminated cores. I have, therefore, tried to explain the phenomena in many other ways more or less in accordance with the facts observed, and I do not agree with you in the opinion that it is necessary to assume the action to be due to Foucault currents, I mean currents circulating in paths of measurable length.

The magnetic force around a conductor conveying current diminishes with the distance. The magnetisation being an arrangement displacement or orientation of parts possessing weight and inertia requires time. When a sudden magnetising force is applied to the core (by passing a current through the coil surrounding the core) it may occur that the outside - that is, the side nearest to the coil - is magnetised first, though the force appears in every part of the core without loss of time, but different in intensity. The magnetisation thus spreads towards the portions of the core where the force is less intense. As the current sinks down to zero and reverses, a wave of magnetisation passes from the stronger to the weaker magnetised parts, partly on account of the tendency to equalisation throughout the core when the same is magnetised and left to itself, and partly because of the repulsion which is exerted by the current upon the existing polarity. The changing permeability of the parts may also be of more or less influence. Various other explanations, more or less “eccentric,” have suggested themselves to me.

You state that I have misinterpreted my results, and it looks as though you believe my views to be unsound. Your arguments are those of an eminent scholar. I was myself a fair scholar. For years I pondered, so to speak, day and night over books, and filled my head with sound views - very sound ones, indeed - those of others. But I could not get to practical results. I then began to work and think independently. Gradually my views became unsound, but they conducted me to some sound results. 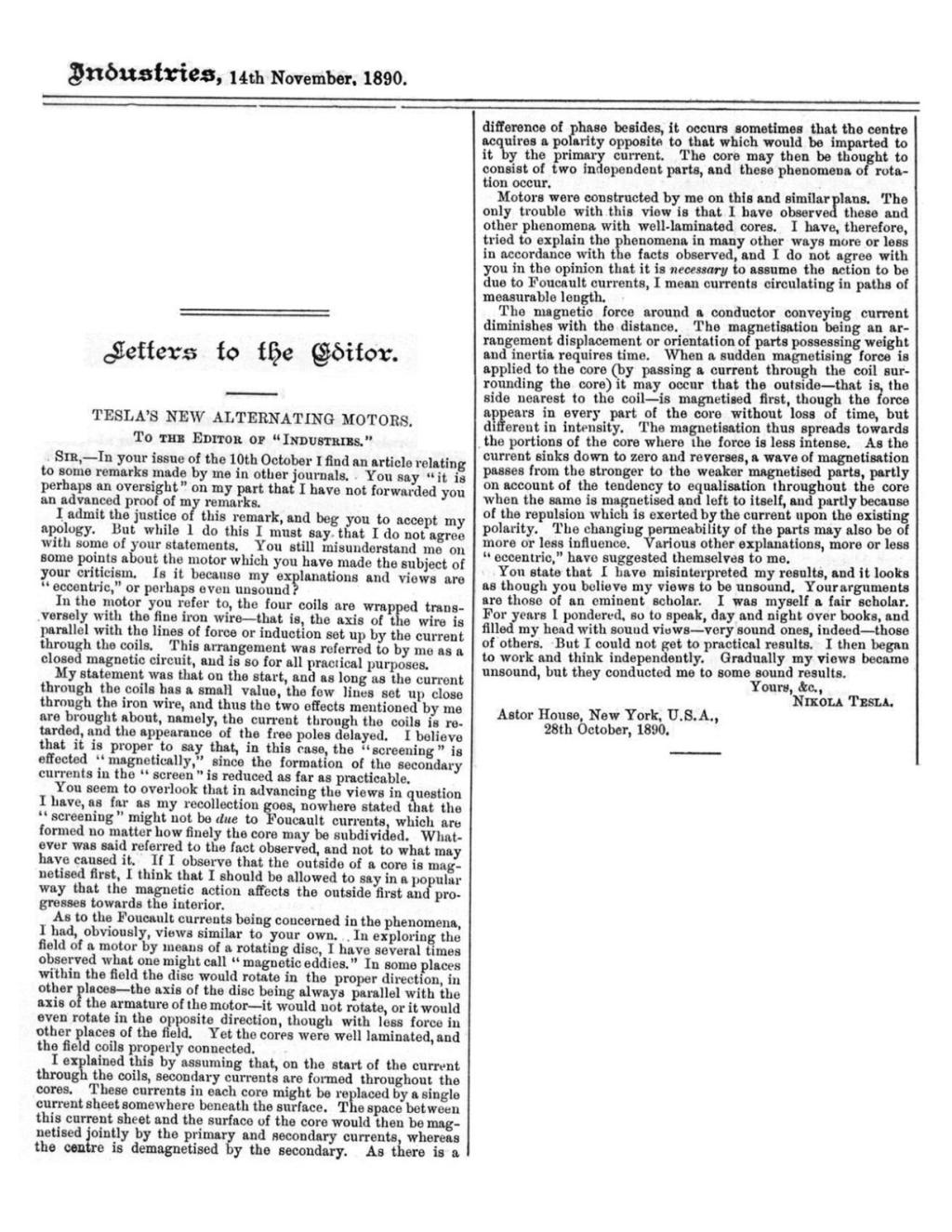