Mr. Charles Wilson Price, editor of The Electrical Review, does not say that Nikola Tesla’s latest invention of a rotary engine operated by steam or gases will save most of the 30,000,000 horse power wasted annually by manufacturing plants in this country, power that is worth upward of half a billion dollars. He has not said, as Mr. Tesla is reported as saying, that the new engine will give the world a flying machine that, without planes or screw propellers, “excessively swift, and, above all, perfectly safe in the greatest storm,” will be small and compact compared with present machines, but capable of being built to carry shiploads of passengers. What Mr. Price does say about the engine, however, arrests attention. A small turbine with a rotor two inches thick and hardly ten inches in diameter, without vanes, blades, valves, or sliding contacts, has been exhibited at the Edison station here, and has been found “capable of developing 110 horse power.” In fact, several of Tesla’s engines have been tested. The Electrical Review publishes his description of them, declaring that his invention “cannot fail to excite interest in engineering circles the world over.”

Sir William Ramsay said in his recent address before the British Association that “a good steam engine converts about one-eighth of the potential energy of the fuel into useful work; seven-eighths are lost as unused heat and useless friction.” In a good gas engine two-thirds of the fuel energy is wasted. It is quite conceivable that inventions will be made to conserve the enormous energies now wasted. Tesla’s turbine, operating without the shocks or vibrations of engines that work with pistons, paddles, vanes, or blades, directs the propelling fluid along rotating disks in free spirals, and by its adhesive and viscous properties the fluid communicates its energy to the disks. By a reverse process the disks may be made to impart motion to fluids, thus acting as a pump which, if what is said about it is true, will effect great changes in mining operations. As a motor its inventor says the machine will presently be seen in automobiles, working by gas or steam, in locomotives and ocean liners, and in factories all over the world.

Mr. Tesla has acquired a reputation for revolutionary inventions that never quite arrived at the point of practical utility. But some of his inventions have proved to be practical and eminently useful. The new engine may be one of them. 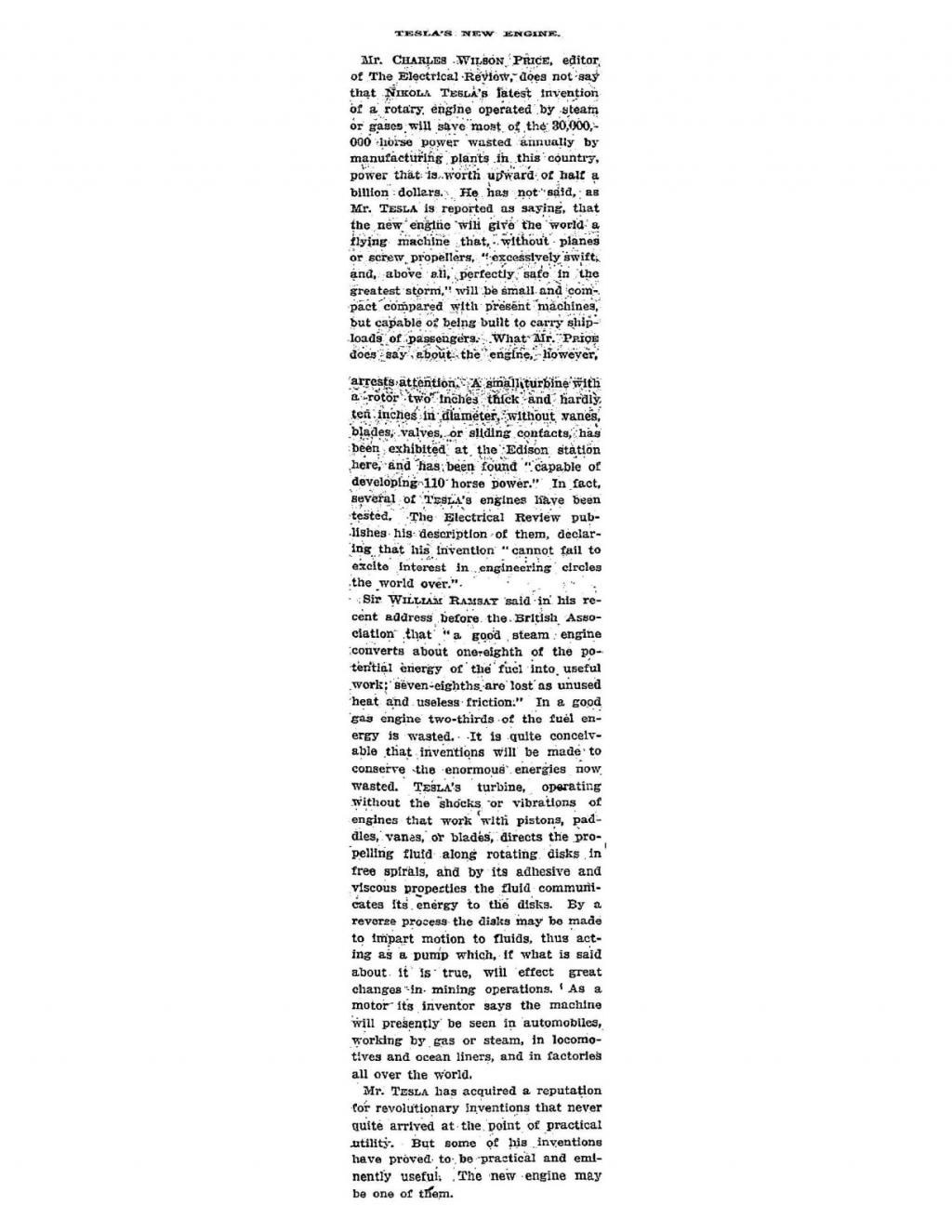