I read with interest an article in the Sunday World of Jan. 20 on “Tuned Lightning,” described as a mysterious new energy, which is to turn every wheel on earth, and is supposed to have been recently discovered by the Danish inventors Waldemar Poulsen and P. O. Pederson.

From other reports I have gathered that these gentlemen have so far confined themselves to the peaceful production of miniature bolts not many inches long, and I am wondering what an account of their prospective achievements would read like if they had succeeded in obtaining, like myself, electrical discharges of 100 ft., far surpassing lightning in some features of intensity and power.

In view of their limited Jovian experience, the programme outlined by the Danish engineers is rather extensive, Lord Armstrong’s vast resources notwithstanding. Naturally enough, I shall look with interest to their telephoning across the Atlantic, supplying light and propelling airships without wires. Anch in suito pittore. (I, too, am a painter.) In the mean time it may not be amiss to state here incidentally that all the essential processes of and appliances for the generation, transmission, transformation, distribution, storage, regulation, control, and economic utilisation of “tuned lightning” have been patented by me, and that I have long since undertaken, and am sparing no effort to render these advances instrumental in insuring the welfare, comfort, and convenience, primarily, of my fellow citizens.

There is nothing remarkable in the demonstration reported to have been made before Sir William Preece and Prof. Sylvanus P. Thompson, nor is there any novelty in the electrical devices employed. The lighting of arc lamps through the human body, the fusing of a piece of copper in mid-air, as described, are simple experiments which by the use of my high-frequency transformers any student of electricity can readily perform. They teach nothing new, and have no bearing on wireless transmission, for the actions virtually cease at a distance of a few feet from the source of vibratory energy. Years ago I gave exhibitions of similar and other much more striking experiments with the same kind of apparatus, many of which have been illustrated and explained in technical journals. The published records are open to inspection.

Regardless of all that, the Danish inventors have not as yet offered the slightest proof that their expectations are realisable, and before advancing seriously the claim that an efficient wireless distribution of light and power to great distances is possible, they should, at least, repeat those of my experiments which have furnished this evidence.

A scientific audience cannot help being impressed by a display of interesting phenomena, but the originality and significance of a demonstration such as that referred to can only be judged by an expert possessed of full knowledge and capable of drawing correct
conclusions. A novel effect, spectacular and surprising, might be quite unimportant, while another, seemingly trifling, is of the greatest consequence.

To illustrate, let me mention here two widely different experiments of mine. In one the body of a person was subjected to the rapidly-alternating pressure of an electrical oscillator of two and a half million volts; in the other a small incandescent lamp was lighted by means of a resonant circuit grounded on one end, all the energy being drawn through the earth electrified from a distant transmitter.

The first presents a sight marvellous and unforgettable. One sees the experimenter standing on a big sheet of fierce, blinding flame, his whole body enveloped in a mass of phosphorescent wriggling streamers like the tentacles of an octopus. Bundles of light stick out from his spine. As he stretches out the arms, thus forcing the electric fluid outwardly, roaring tongues of fire leap from his fingertips. Objects in his vicinity bristle with rays, emit musical notes, glow, grow hot. He is the centre of still more curious actions, which are invisible. At each throb of the electric force myriads of minute projectiles are shot off from him with such velocities as to pass through the adjoining walls. He is in turn being violently bombarded by the surrounding air and dust. He experiences sensations which are indescribable.

A layman, after witnessing this stupendous and incredible spectacle, will think little of the second modest exhibit. But the expert will not be deceived. He realizes at once that the second experiment is ever so much more difficult to perform and immensely more consequential. He knows that to make the little filament glow, the entire surface of the planet, two hundred million square miles, must be strongly electrified. This calls for peculiar electrical activities, hundreds of times greater than those involved in the lighting of an arc lamp through the human body. What impresses him most, however, is the knowledge that the little lamp will spring into the same brilliancy anywhere on the globe, there being no appreciable diminution of the effect with the increase of distance from the transmitter.

This is a fact of overwhelming importance, pointing with certitude to the final and lasting solution of all the great social, industrial, financial, philanthropic, international, and other problems confronting humanity, a solution of which will be brought about by the complete annihilation of distance in the conveyance of intelligence, transport of bodies and materials, and the transmission of the energy necessary to man’s existence. More light has been thrown on this scientific truth lately through Prof. Slaby’s splendid and path-breaking experiment in establishing perfect wireless telephone connection between Naum and Berlin, Germany, a distance of twenty miles. With apparatus properly organised such telephonic communication can be effected with the same facility and precision at the greatest terrestrial distance.

The discovery of the stationary terrestrial waves, showing that, despite its vast extent, the entire planet can be thrown into resonant vibration like a little tuning fork; that electrical oscillations suited to its physical properties and dimensions pass through it unimpeded, in strict obedience to a simple mathematical law, has proved beyond the shadow of a doubt
that the earth, considered as a channel for conveying electrical energy, even in such delicate and complex transmissions as human speech or musical composition, is infinitely superior to a wire or cable, however well designed.

Very soon it will be possible to talk across an ocean as clearly and distinctly as across a table. The first practical success, already forecast by Slaby’s convincing demonstration, will be the signal for revolutionary improvements which will take the world by storm.

However great the success of the telephone, it is just beginning its evidence of usefulness. Wireless transmission of speech will not only provide new but also enormously extend existing facilities. This will be merely the forerunner of ever so much more important development, which will proceed at a furious pace until, by the application of these same great principles, the power of waterfalls can be focussed whenever desired; until the air is conquered, the soil fructified and embellished; until, in all departments of human life distance has lost its meaning, and even the immense gulf separating us from other worlds is bridged. 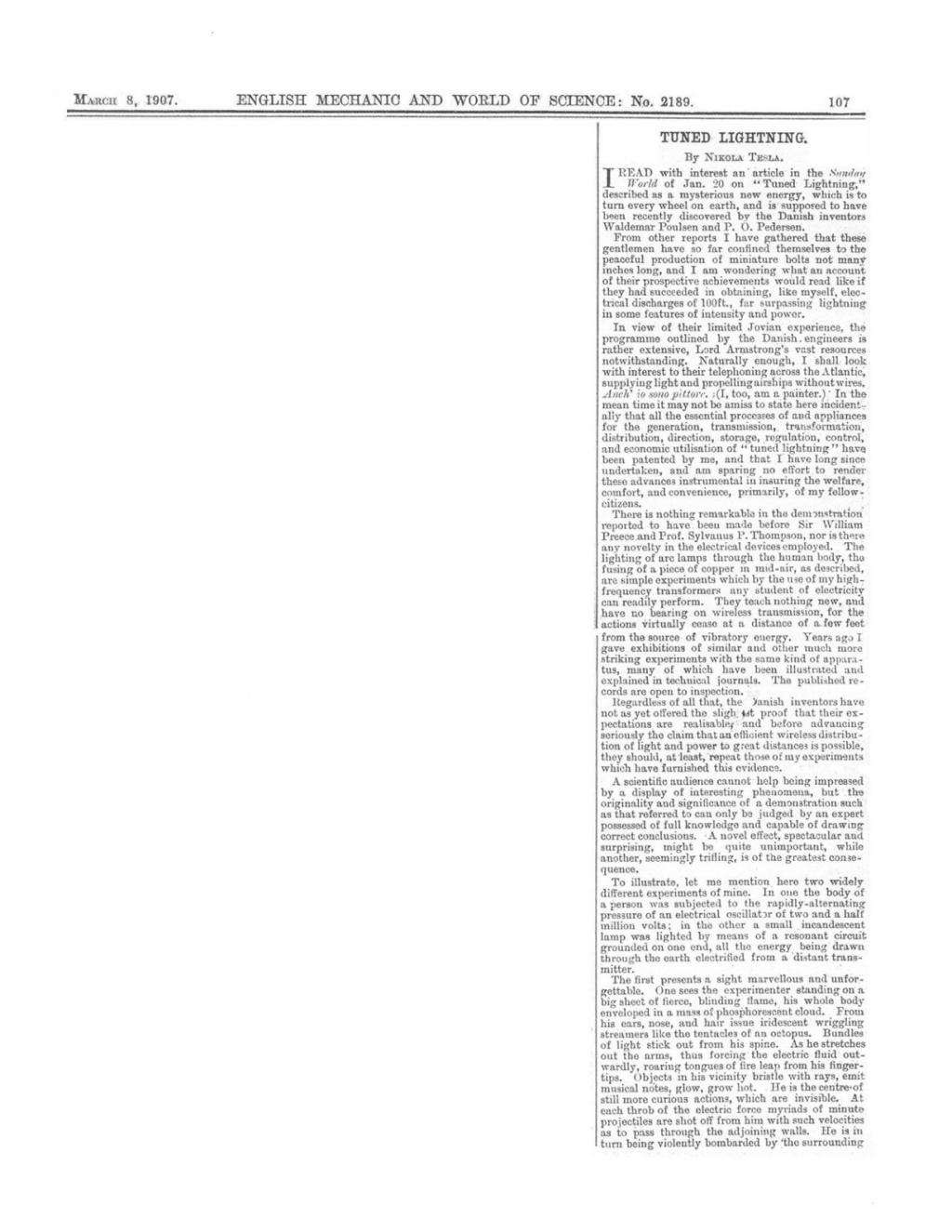