We May Signal to Mars

Or gird the earth with news without a wire.

Nicola [sic] Tesla Convinced that to the Latter Extent at Least His Plan Is Practicable, and Why Not Between Planets, as Between the Sun and the Earth!

Nicola [sic] Tesla, the electrician and scientist, has had in course of development for some time a project for instantaneous and simultaneous communication to all parts of the earth, and perhaps to some of the nearer planets. Mr. Tesla's plan does not deal with fireworks, or the illumination of a large part of the earth's surface in hope of attracting the attention of the dwellers on Mars, but deals wholly with the electric waves. In regard to it, Mr. Tesla said yesterday to a Sun reporter:

“I have had this scheme under consideration for five or six years, and I am becoming more convinced every day that it is based upon scientific principles and is thoroughly practicable. We know that electric disturbances on the sun are productive of similar disturbances on the earth in the form of thunder showers. Now, why is it not equally conceivable that a disturbance on the earth's surface should produce some tangible effect on other planets. The transmission of disturbances on the sun shows beyond doubt that waves of electricity are propagated through all space.

“The objection may be put forward that sufficient electrical disturbance cannot be made on the earth's surface, and that we should be wholly dependent upon thunder stores and other phenomena of nature for the success of our experiment. But, on the contrary, we can make all the artificial thunder and lightning we want. There is no difficulty in making electric apparatus with a spark gap of a mile, and if that did not prove effective it could be increased.

“Do not get the impression,” continued Mr. Tesla, “that the success of the experiment is in any way dependent upon the light, noise, or vibration accompanying such an electric discharge. It is wholly through the electricity waves, which are propagated through the atmosphere and the ether beyond, that we may hope to obtain any results. But if there are intelligent inhabitants of Mars or any other planet, it seems to me that we can do something to attract their attention.

“This, of course, is the extreme application of this principle of the propagation of electric waves. The same principle may be employed with good effect for the transmission of news to all parts of the earth. It was formerly thought that in order to get any power out of electricity a conducting circuit must exist, but it has been shown that the same results may be accomplished with a single wire. It is perfectly possible to operate a motor or electric light with just a single line of wire leading to the apparatus. It naturally occurred to me that, as the earth is a conductor, an electrical disturbance at one point, causing a change in the equilibrium of the earth's electricity, should be felt at all points on the earth's surface, and might be recorded by properly constructed instruments.

“The possibilities of such a transmission of intelligence cannot be exaggerated. Every city on the globe could be on an immense ticker circuit, and a message sent from New York would be in England, Africa, and Australia in an instant. What a grand thing it would be in times of war, epidemic, or panic in the money market!”

Mr. Tesla is at present engaged in finishing his calculations and perfecting the apparatus necessary for experiment in his new field of investigation, and he hopes soon to be able to show practicability of his plan. 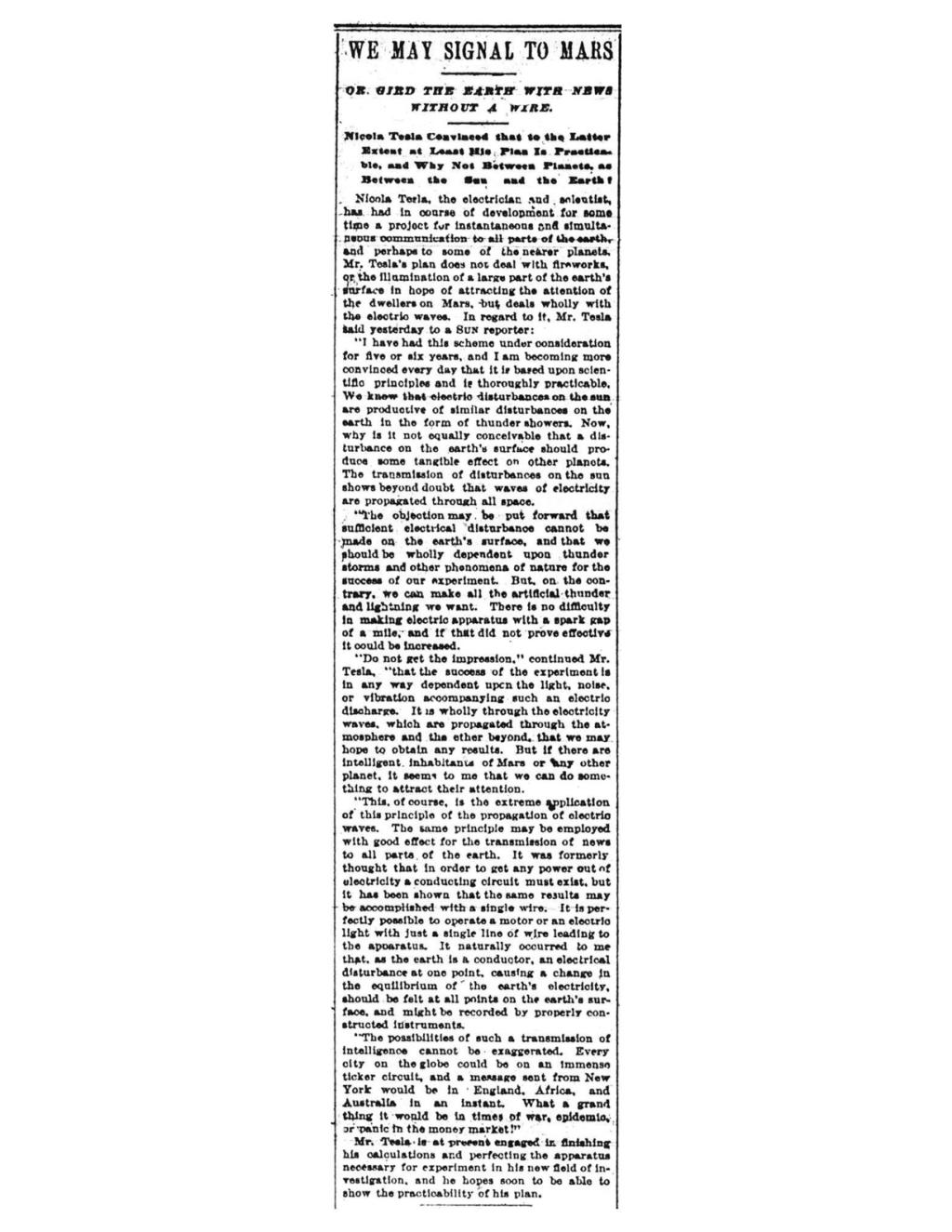