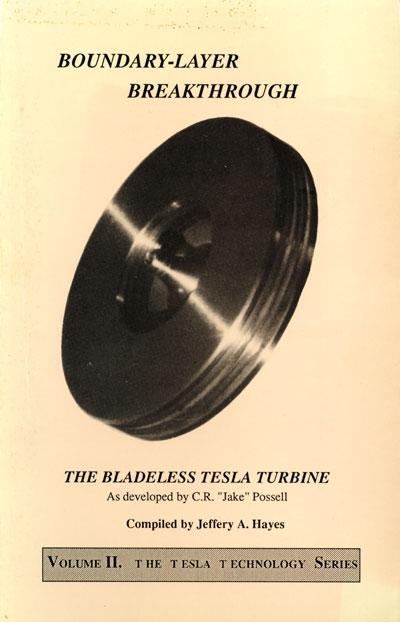 by Jeffery A. Hayes

Most people remember Nikola Tesla for his work and revelations in the field of electrical energy and the invention of radio. However, Tesla had a life long interest in developing a flying machine. Tesla had envisioned himself as the first man that would fly. He had planned to build an aircraft that would operate on electric motors. However, the first men who successfully flew an aircraft used the reciprocating internal combustion engine. Though successful in achieving night, aircraft using these engines were dangerous and unpredictable, due to the engine's lack of adequate power. Tesla turned his attention to revamping the internal combustion engine so as to make flying safe for all and minimize its environmental impact. Documented in this text is the result of Tesla's endeavors and the resulting marvel of machines called the Bladeless Boundary-Layer Turbine.

Although Tesla's dream for his engines application in aircraft was not realized in his lifetime, if allowed to be used in aircraft today, it would provide a quiet, safe, simple and efficient alternative to our supposedly advanced bladed turbine aircraft engines. It has been estimated that an increase in fuel efficiency of a factor of three could be realized in aircraft and thus substantially reduce pollution. Not only this, the Bladeless Tesla Turbine Engine can turn at much higher speeds with total safety. If a conventional bladed turbine engine goes critical or fails, watch out, you have exploding pans slicing through hydraulic lines, control surfaces and maybe even you. With the Bladeless Tesla Turbine this is not a danger because it will not explode. If it does go critical, as has been documented in tests at 85,000 rpm, the failed component will not explode but implode into tiny pieces which are ejected through the exhaust while the undamaged components continue to provide thrust to keep you airborne. We can only speculate on the human suffering that could and should be averted.

The application of this amazing engine was not to be limited to aircraft. Tesla was setting up plans to replace what he considered the wasteful, polluting, inefficient and complicated reciprocating engine in all its applications, including the automobile. Tesla's small but powerful engine has only one moving pan and is 95% efficient, which means tremendous mileage. It runs vibration free and doesn't even require a muffler. Not only is this engine 95% efficient, as compared to 25% efficiency or less of the conventional gas engine, it can run efficiently on any fuel from sawdust to hydrogen with no wear on the internal engine components. This engine's speed-torque characteristic allows full torque at the bottom of the speed range eliminating the conventional shifting gear transmission. This provides additional economy as the expensive, complicated and wear prone transmission is eliminated.

Unlike most people of the time, Tesla was very concerned about the long range environmental damage the reciprocating engines would create. He stressed over and over how we must take the long range view and not step out of harmony with our life support systems. Today the widening concern for Spaceship Earth and the renewal of an old ethic “We don't inherit the Earth from our ancestors, we borrow it from our children” is now slowly beginning to awaken people to the concerns of Tesla.

Although the existence of the automobile on city streets dates back to the first years of the century, its role as a contributor to air contamination did not receive wide acceptance among scientists until the 60's. Factual evidence that urban area smog was chemically related to automobile emissions had been produced and acknowledge by scientific groups in the 1950's. Despite vehement disagreement which ensued between government and the automotive industry on this volatile issue, research and development programs were initiated by both groups in an effort to identify the reciprocating internal combustion engine's sources of pollution and determine what corrective action might be taken. Obviously Tesla's ounce of prevention was not heeded, leaving us with well over the pound required for a cure with nearly half of all air pollution caused by the reciprocating internal combustion engine.

The Boundary Layer Turbine is not only an engine that is hard to comprehend by our currently imposed standards, but can also be used as a pump with slight modification. And like its cousin the engine, it has Herculean power. Unlike conventional pumps that are easily damaged by contaminants, the Bladeless Tesla Pump can handle particles and corrosives in stride as well as gases with no cavitation effect that destroys, in short order, conventional type pumps.

These pumps and engines, though unknown to most, are available for commercial sale. If large scale commercial production was implemented, these engines and pumps would be extremely affordable due to their simplicity of manufacture, longevity, almost total lack of maintenance and the added bonus that they require no crank case oil.

Almost a quarter of the air pollution today comes from the coal being burned to generate electricity. Fuel consumption, resulting in air pollution and acid rain, could be significantly reduced (by a factor of twenty!) simply by replacing the conventional bladed steam turbines currently used by utilities with the Bladeless Tesla Steam Turbine. This also would have the added bonus of drastically reducing maintenance. But the real solution lies in using low temperature wet steam occurring naturally from the ground in the form of geothermal energy. This energy would destroy a conventional bladed steam turbine, unless expensive steam drying is employed. However, the Bladeless Tesla Steam Turbine requires no drying and can be connected directly to the geothermal source. It has been estimated that the geothermal potential in just Southern California alone, could power the entire North American Continent with NO POLLUTION! Large oil companies have comprehended the potential of geothermal energy and have purchased many of these large tracks of prime geothermal land.

Due to the revolutionary concepts embodied in this engine, we can easily end the so called energy crisis and dramatically reduce pollution. Even the vested energy interests are beginning to understand that now is the time for change, realizing their future health and wealth is directly linked to that of the environment. You can't hide or buy your way out of a devastated planet. There must also be a move forward for the many misinformed environmentalists who see our future as one of regression from technology instead of its proper usage.

Tesla from his 1919 autobiography, My Inventions:

“My alternating system of power transmission came at a psychological moment, as a long-sought answer to pressing industrial questions, and although considerable resistance had to be overcome and opposing interests reconciled, as usual, the commercial introduction could not be long delayed. Now, compare this situation with that confronting my turbine, for example. One should think that so simple and beautiful an invention, possessing many features of an ideal motor, should be adopted at once and, undoubtedly, it would under similar conditions. But the prospective effect of the rotating field was not to render worthless existing machinery; on the contrary, it was to give it additional value. The system lent itself to new enterprise as well as to improvement of the old. My turbine is an advance of a character entirely different. It is a radical departure in the sense that its success would mean the abandonment of the antiquated types of prime movers on which billions of dollars have been spent. Under such circumstances the progress must needs be slow and perhaps the greatest impediment is encountered in the prejudicial opinions created in the minds of experts by organized opposition.”

H.G. Wells once said that future history will be a race between education and catastrophe. This book is dedicated to the race for education.