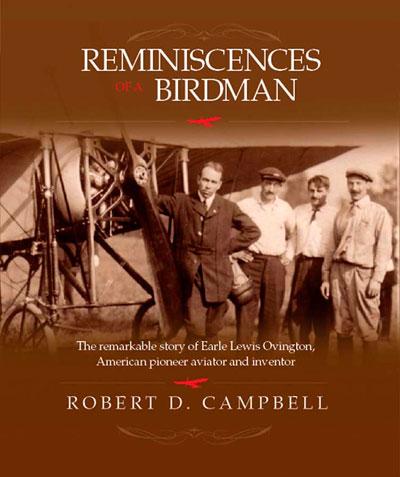 Reminiscences of a Birdman

by Robert D. Campbell and Beth Ann Robbins
Known only as America's first Air Mail Pilot, there is much more to the story of Earle Lewis Ovington that can be learned today from a study of his life. Earle Ovington exemplified all that was right with America—true sportsmanship, common sense, fairness, perseverance, achievement, entrepreneurship, competitiveness, and personal responsibility—character traits sadly lacking in much of America today. In a multifaceted career that spanned a mere fifty-seven years, he achieved a truly amazing number of accomplishments.

From the wind-swept streets of Chicago, to the hurried pace of New York City, to the quiet Newton Highlands suburb of Boston, to the boardwalks of Atlantic City and the lush open spaces of Santa Barbara, California, Earle Lewis Ovington passionately pursued his dreams. At age sixteen he left home to seek employment with Thomas Edison and later earned his Electrical Engineering degree from the Massachusetts Institute of Technology. He was a showman, a multi-enterprising entrepreneur, inventor, and fearless pioneer aviator.

In a detailed and well researched narrative that draws upon hundreds of photographs, letters, government records, and original source materials from private and family records, the author weaves the story of the life of Earle Ovington — from his little known contribution to early X-ray technology and friendship with Nikola Tesla, to his roles in the advancement of the early motorcycle and aviation industries in America.

Anchored in the optimism of the late nineteenth century, he was a visionary who continually looked to the future. Virtually forgotten today, Earle Ovington lived a life of which most people can only dream. Reminiscences of a Birdman tells for the first time to a new generation, the complete story of this uniquely American hero.