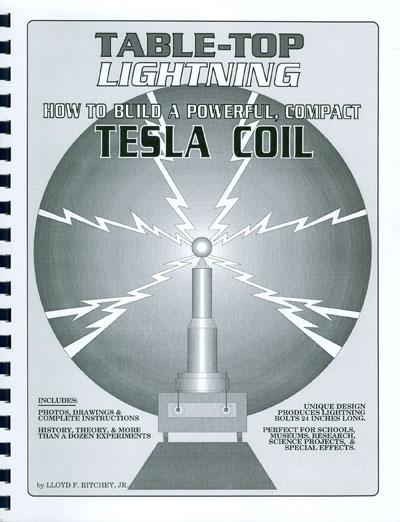 Table-Top Lightning: How to Build a Powerful, Compact Tesla Coil

Tesla claimed that experiments he conducted with the Magnifying Transmitter confirmed his theory that the earth could be resonated, and that electrical power could thus be transmitted to any point on the planet without wires, and with very small losses. His power transmission experiments, to this day, have not been duplicated, nor have his theories been disproved.

Tesla coils have been used as radio transmitters, as drivers for nuclear accelerators, as diathermy and electro-dessication instruments in medicine, as research instruments in physics laboratories, and as demonstration apparatus in classrooms and science museums.

From the days of the silent movie to the present, Tesla coils have provided dramatic electrical effects for film and stage. The early silent film Metropolis, was probably the first to use discharges from a Tesla coil to provide special effects. Frankenstein, Aliens, Back to the Future, Terminator, Star Wars, and many additional films have used Tesla coil effects.

As archaic as spark-gap oscillators may now seem, Tesla's designs and methods were years ahead of their time. The wonderfully simple circuit belies the genius involved in its concept.

Variations of Tesla coil circuits exist in virtually every radio, television, computer, and transmitter. Without the principles embodied in its design, modern electronics would be impossible.

The high-performance Tesla coils described in this manual produce lightning bolts up to 24" long and provide high-voltage pyrotechnics for dozens of dramatic experiments and special effects.

Because of their portability and low power requirements, the coils are perfect for classroom demonstrations, science shows, special effects, and research.

In addition to a bit of theory and a set of very specific construction details, this book provides more than a dozen interesting experiments that can be demonstrated with the unit.