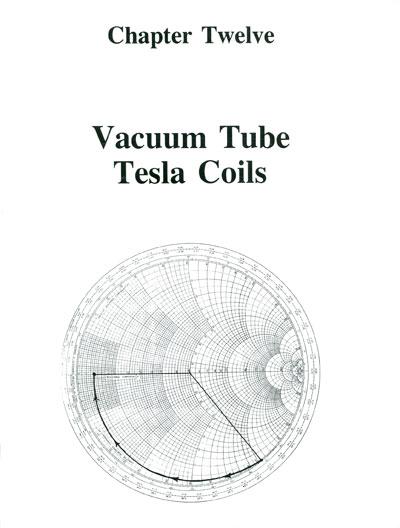 With the advent of vacuum tube technology, it became evident that high power oscillators could be used to drive Tesla coils. A variant of this approach seems to have been of great interest in early accelerator technology and for X-ray production. In fact, David Sloan, a ham radio operator and graduate student under E.O. Lawrence, apparently rediscovered Tesla's observation of 35 years earlier: The “Extra Coil” (Sloan would call it a resonance transformer) may be driven directly (or even by an untuned link) from a narrow-band master oscillator to produce a very large voltage rise or magnification. Before we are through with this topic, the reader will see that, even today the basic idea, discovered by Tesla almost 100 years ago, still forms a major ingredient in the modem accelerator technology used for high energy physics.

Over the years, many, many vacuum tube Tesla coil projects have been described and we have listed several in the references. Unfortunately, there does not appear to be much in the way of serious analysis, specifically directed toward vacuum tube Tesla Coils, in either the engineering literature cited above, or in the experimenter magazine articles.

The lack of formal analysis in the scientific literature is not because it was considered trivial and inappropriate for professional publication, but rather because it was thought that “... resonance transformers having mutual inductance between the elements of the circuit in addition to having the capacity unevenly distributed along the inductance, cannot be treated usefully by mathematics.” As shown previously, this is certainly not the case. Since the work of Schelkunoff and of Kandoian and Sichak, there is no excuse for a non-analytical discussion of resonance transformers.

In this book we would like to combine our previous treatment of resonance transformers with traditional vacuum tube analysis to present an engineering discussion of vacuum tube Tesla Coils. We start by reviewing standard generalized oscillator concepts and then specialize to Tesla Coils driven by active devices such as vacuum tubes. We close with an overview of Tesla's idea which encompasses all forms of distributed resonators - whether they be constructed as coils of wire, lengths of transmission line, cavity resonators or even optical resonators - all are specific embodiments of the phenomenon of resonant rise by standing waves, as discovered by Tesla 100 years ago. And, all inherently possess the capability to raise the electric field intensity to the point of media breakdown with an ensuing spectacular production of electric fire.