The object of my invention is to provide an improved method for regulating the current on dynamo-electric machines.

The relative positions of the respective brushes are varied, either automatically or by hand, so that the shunt becomes inoperative when the auxiliary-brush has a certain position upon the commutator, but when said auxiliary brush is moved in its relation to the main brushes, or the latter are moved in their relation to the auxiliary brush, the electric condition is disturbed and more or less of the current through the field-helices is diverted through the shunt or a current passed over said shunt to the field-helices.

Devices for automatically moving the brushes in dynamo-electric machines are well known, and those made use of in my machine may be of any desired or known character.

In the drawings, Figure 1 is a diagram illustrating my invention, showing one core of the field-magnets with one helix wound in the same direction throughout. Figs. 2 and 3 are diagrams showing one core of the field-magnets with a portion of the helices wound in opposite directions. Figs. 4 and 5 are diagrams illustrating the electric devices that may be employed for automatically adjusting the brushes, and Fig. 6 is a diagram illustrating the positions of the brushes when the machine is being energized on the start.

a and b are the positive and negative brushes of the main or working-circuit, and c the auxiliary-brush. The working-circuit D extends from the brushes a and b, as usual, and contains electric lamps or other devices, D', either in series or in multiple arc.

By combining with the brushes a, b and c any known automatic regulating mechanism the current developed can be regulated in proportion to the demands in the working-circuit. The parts M and M' of the field-wire may be wound in the same direction, (In this case they are arranged as shown in Fig. 1; or, the part M may be wound in the opposite direction, as shown in Figs. 2 and 3.)

It will be apparent that the respective cores of the field-magnets are subject to the neutralizing or intensifying effects of the current in the shunt through c', and the magnetism of the cores will be partially neutralized or the point of greatest magnetism shifted, so that it will be more or less remote from or approaching to the armature, and hence the aggregate energizing actions of the field magnets on the armature will be correspondingly varied.

In the form indicated in Fig. 1 the regulation is effected by shifting the point of greatest magnetism, and in Figs. 2 and 3 the same effect is produced by the action of the current in the shunt passing through the neutralizing-helix.

The relative positions of the respective brushes may be varied by moving the auxiliary brush or the brush c may remain quiescent and the core p be connected to the main brush holder A', so as to adjust the brushes a b in their relation to the brush c. If, however, an adjustment is applied to all the brushes, as seen in Fig. 5, the solenoid should be connected to both A and C, so as to move them toward or away from each other.

There are several known devices for giving motion in proportion to an electric current. I have shown the moving cores in Figs. 4 and 5 as convenient devices for obtaining the required extent of motion with very slight changes in the current passing through the helices. It is understood that the adjustment of the main-brushes causes variations in the strength of the current independently of the relative position of said brushes to the auxiliary brush. In all cases the adjustment may be such that no current flows over the auxiliary brush when the dynamo is running with its normal load.

In Fig. 5, instead of a solenoid, an iron tube enclosing a coil is shown. The piston of the coil is attached to both brush holders A A and C. When the brushes are moved directly by electrical devices, as shown in Figs. 4 and 5, these are so constructed that the force exerted for adjusting is practically uniform through the whole length of motion.

My improvement has, besides, the advantages to facilitate the self-exciting of the machine in all cases where the resistance of the field-wire is very great comparatively to the resistance of the main circuit at the start—for instance, on arc-light machines. In this case I place the auxiliary brush c near to or in preference in contact with the brush b, as shown in Fig. 6, In this manner the part M' is completely cut out, and as the part M has a considerably smaller resistance than the whole length of the field-wire the machine excites itself, whereupon the auxiliary brush is shifted automatically to its normal position.

The combination, with the commutator having two or more main brushes and an auxiliary brush, of the field-helices having their ends connected to the main brushes, and a branch or shunt connection from an intermediate point of the field-helices to the auxiliary brush, and means for varying the relative position upon the commutator of the respective brushes, substantially as set forth. 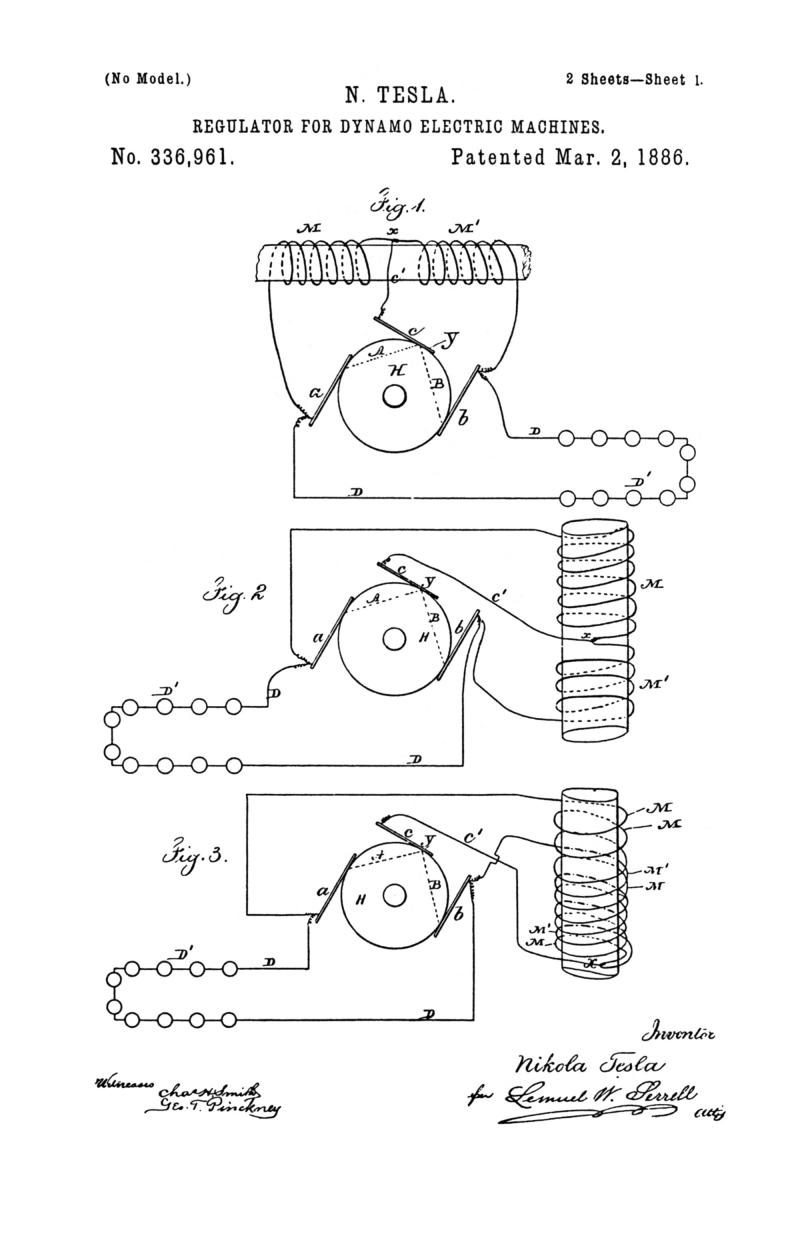 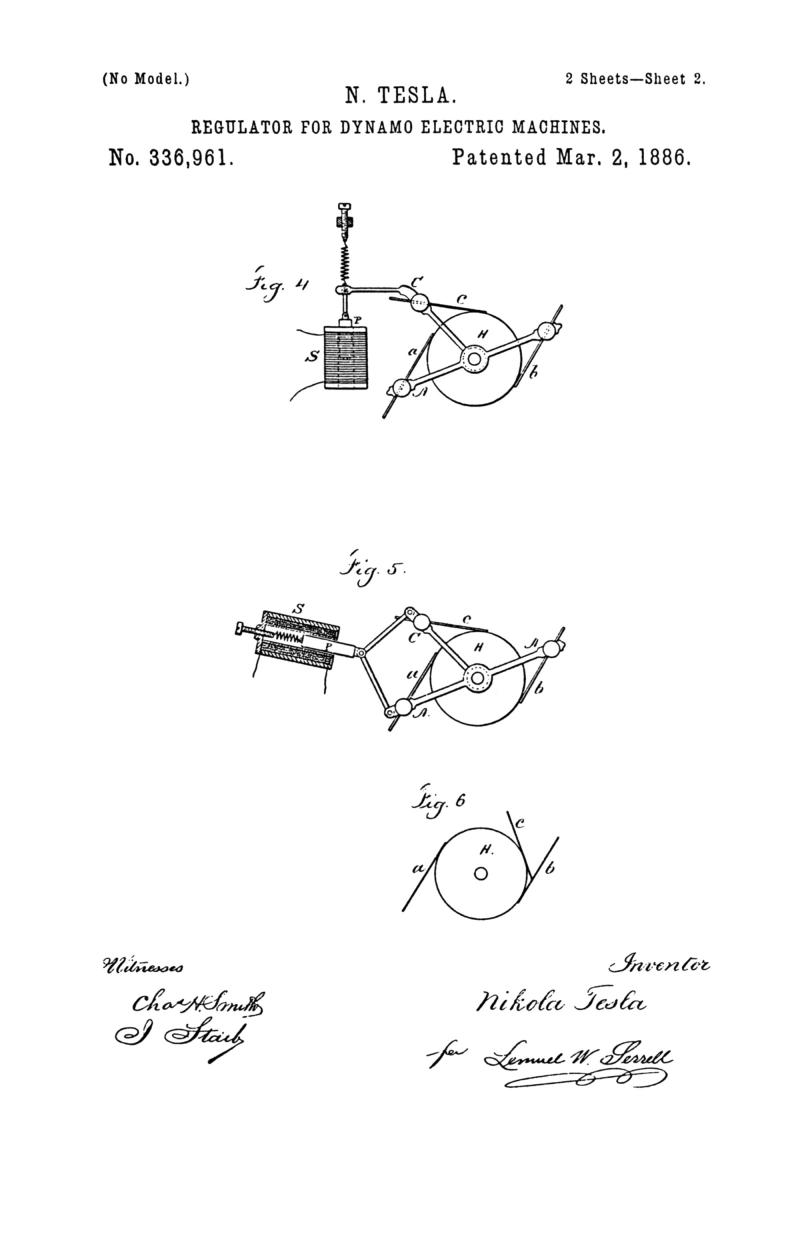