Be it known that I, NIKOLA TESLA, a subject of the Emperor of Austria, from Smiljan, Lika, border country of Austria-Hungary, now residing at New York, in the county and State of New York, have invented certain new and useful Improvements in Dynamo-Electric Machines and Motors, of which the following is a specification, reference being had to the drawings accompanying and forming a part of the same.

This invention is an improvement in the construction of dynamo or magneto electric machines or motors, the improvement consisting in a novel form of frame and field-magnet which renders the machine more solid and compact as a structure, which requires fewer parts, and which involves less trouble and expense in its manufacture.

The invention is applicable to generators and motors generally, not only to those which I have described in former patents, and which have independent circuits adapted for use in my patented alternating current system, but to other continuous or alternating current machines, such as have heretofore been more generally used.

In the drawings hereto annexed, which illustrate my improvements, Figure 1 shows the machine in side elevation. Fig. 2 is a vertical sectional view of the field-magnets and frame and an end view of the armature; and Fig. 3 is a plan view of one of the parts of the frame and the armature, a portion of the latter being cut away.

I cast the field-magnets and frame in two parts. These parts are identical in size and shape, and each consists of the solid plates or ends A B, from which project inwardly the cores C D and the side bars or bridge-pieces, E F. The precise shape of these parts is largely a matter of choice—that is to say, each casting, as shown, forms an approximately-rectangular frame; but it may obviously be more or less oval, round, or square without departure from the invention. I also prefer to reduce the width of the side bars, E F, at the center and to so proportion the parts that when the frame is put together the spaces between the pole-pieces will be practically equal to the arcs which the surfaces of the poles occupy.

The bearings G for the armature-shaft are cast in the side-bars, E F. The field-coils are either wound on the pole-pieces or, preferably, wound on a form and then slipped on over the ends of the pole-pieces. The lower part or casting is secured to a suitable base after being finished off. The armature K on its shaft is then mounted in the bearings of the lower casting and the other part of the frame placed in position, dowel-pins L or any other means being used to secure the two parts in proper position.

In order to secure an easier fit I cast the side bars, E F, and end-pieces, A B, so that slots M are formed when the two parts are put together.

This machine possesses many advantages. For example, I magnetize the cores alternately, as indicated by the characters N S, and it will be seen that the magnetic circuit between the poles of each part of a casting is completed through the solid iron side bars. The bearings for the shaft are located at the neutral points of the field, so that the armature-core is not affected by the magnetic condition of the field.

My improvement is not restricted to the use of four pole-pieces, as it is evident that each pole-piece could be divided or more than four formed by the shape of the casting.

1. A dynamo or magneto electric machine or motor the frame of which is built up of two castings, each consisting of end plates with pole-pieces extending inwardly therefrom and connecting side bars, as set forth.

2. A frame for generators or motors built up of two superposed castings, each consisting of a rectangular frame with pole-pieces extending inwardly from its ends, as set forth.

3. A frame and field-magnet for generators and motors built up of two rectangular castings having pole-pieces extending inwardly from their ends, the faces of said pole-pieces being curved to afford clearance for the armature and provided with energizing-coils, as set forth. 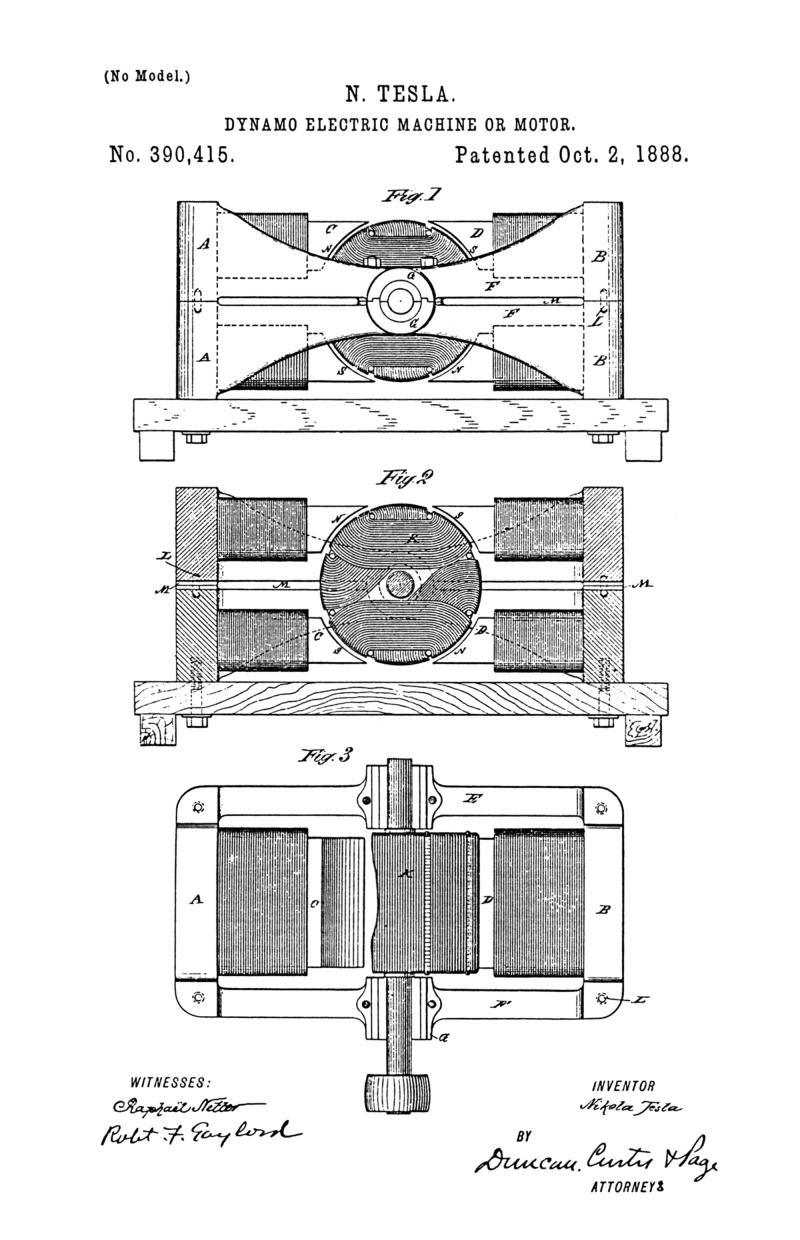