Be it known that I, NIKOLA TESLA, a citizen of the United States, residing at New York, in the county and State of New York, have invented a certain new and useful Improvement in Electrical Condensers, of which the following is a specification, reference being had to the accompanying drawings.

The subject of my present application is a new and improved electrical condenser constructed with a view of obviating certain defects which I have observed to exist in the ordinary forms of such apparatus when employed in the system devised by me of producing light and other effects by means of currents of high frequency and high potential.

I have found that insulating material such as glass, mica, and, in general, those bodies which possess the highest specific inductive capacity are inferior as insulators in such devices when currents of the kind described are employed to those possessing high insulating power, together with a smaller specific inductive capacity, and I have also found that it is very desirable to exclude all gaseous matter from the apparatus, or any access to the same to the electrified surfaces, in order to prevent heating by molecular bombardment and the loss or injury consequent thereon. I have found that I may accomplish these results and produce highly efficient and reliable condensers by using oil as the dielectric, and in this my invention resides.

In the accompanying drawings, Figure 1 is a section of a condenser constructed in accordance with my invention and having stationary plates, and Fig. 2 is a similar view of condenser with adjustable plates.

I use any suitable box or receptacle A to contain the plates or armatures. These latter are designated by B and C and are connected, respectively, to terminals D and E, which pass out through the sides of the case. The plates ordinarily are separated by strips of porous insulating material F, which are used merely for the purpose of maintaining them in position. The space within the can is filled with oil G. Such a condenser will prove highly efficient and will not become heated or permanently injured.

In many cases it is desirable to vary or adjust the capacity of a condenser, and this I provide for by securing the plates to adjustable supports—as, for example, to rods H—passing through stuffing-boxes K in the sides of the case A and furnished with nuts L, the ends of the rods being threaded for engagement with the nuts.

It is well known that oils possess insulating properties, and it has been a common practice to interpose a body of oil between two conductors for purposes of insulation; but I have discovered peculiar properties in oils which render them very valuable in this particular form of device, their employment in which has never heretofore and, so far as I am aware, been regarded as necessary or even desirable.

1. An electric condenser composed of plates or armatures immersed in oil.

2. An electrical condenser composed of plates or armatures adjustable with respect to one another and immersed in oil. 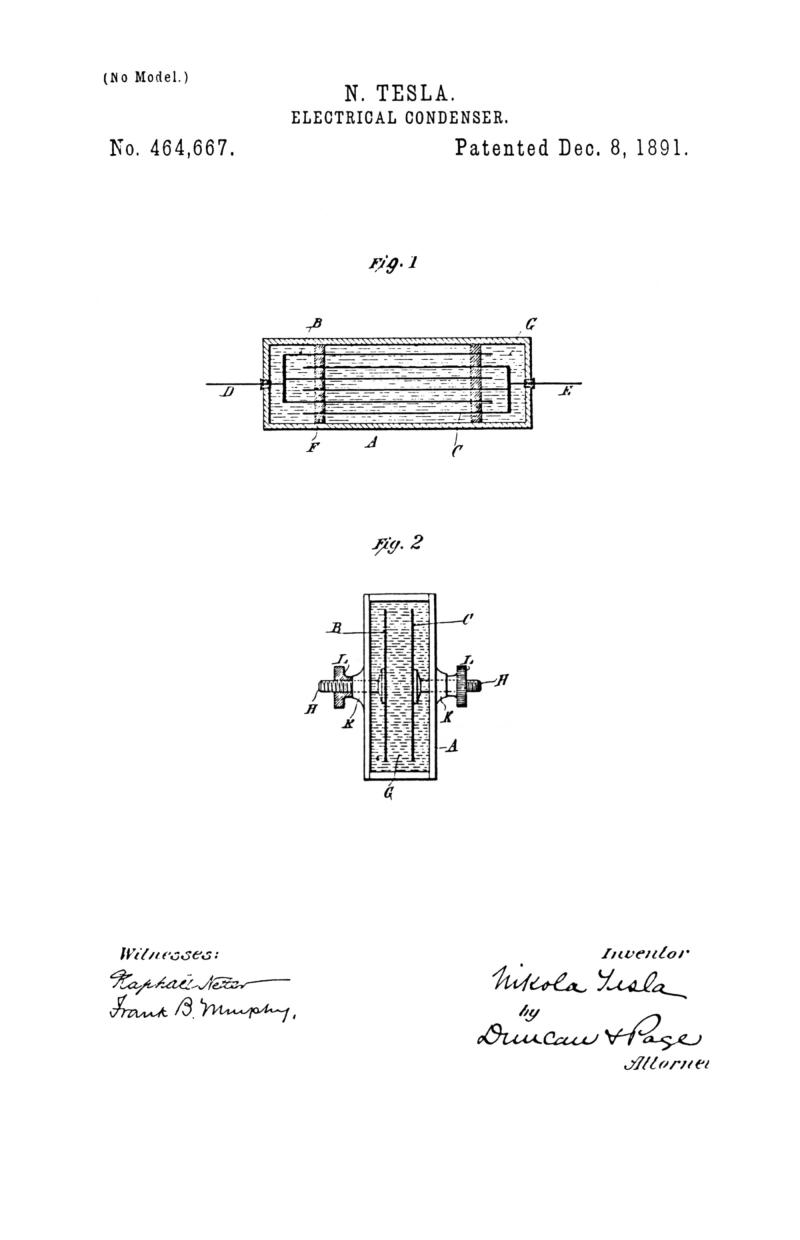