Be it known that I, NIKOLA TESLA, a citizen of the United States, residing at New York, in the county and State of New York, have invented a certain new and useful Improvements in Line Conductors for Systems of Electrical Distribution, of which the following is a specification, reference being had to the drawings accompanying and forming a part of the same.

In any system of electrical transmission or distribution in which currents of excessively high potential are employed, and more particularly, when the frequency is high, there is a dissipation of energy from the conductor or conductors of the line, due to the electrification of the atmosphere or other surrounding medium, or other causes.

Heretofore it has been usual, in order to prevent loss by dissipation or interference by induction on line conductors, to insulate the same and enclose them in a continuous conducting sheathing or cover which has been connected with the ground by a good conducting path.

The object of my invention is to prevent loss on line conductors in a system of electrical transmission and distribution, more particularly such as that described by me in patent of June 23, 1891, No. 454,622, but in any other system in which alternating or, generally speaking, varying currents of excessively high potential are employed.

I have found that in these systems the use of a conducting sheath or screen around the line conductors and well grounded, or even brought into proximity to external conductors or large bodies, is attended by an actual and generally a serious loss of energy. I therefore maintain the sheath either entirely isolated or connected directly or inductively to the ground, through a path which will practically prevent the passage of currents over it. I have also found that when a continuous insulated sheath or screen is employed, there is greater liability to loss of energy by inductive action, for unless the sheath or screen be considerably shorter than the current waves passing in the conductor, electro-motive forces will be set up between different points in the sheath, which will result in the passage between such points of induced currents. I, therefore, divide up the sheath or screen into short lengths, very much shorter than the wave lengths of the current used, so that the grounding of any one of such lengths or the approach thereto of a large body will result in an inappreciable loss, or at most a small local draining of the energy, while the tendency of currents to flow between different points in the sheath is effectually overcome. The function of the sheath as a static screen for preventing the dissipation of the electric energy, however, requires for its complete effectiveness an uninterrupted conducting partition or screen around the conductor. I attain this respect in the case of a sectional screen, by causing the ends of the insulated divisions or sections of the same to overlap, interposing a suitable insulating material between the overlapping portions. By means of a conductor or conductors thus protected, I may transmit with slight loss and to great distances currents of very high potential and extremely high frequency.

The invention is illustrated in the accompanying drawings in which—

A is the central wire or conductor that carries the current.

B is an insulating coating.

C is a conducting sheathing or screen, which may be externally insulated, if so desired. This sheathing is divided up, as shown, into short lengths or sections, and the end of one section overlaps or telescopes with the end of the adjacent sections but is insulated therefrom by the material D.

It is well known that a static screen, to be entirely effective as such, should have a ground connection, but it has been usual in such cases to provide a good electrical connection from the screen to earth. When a current of excessively high potential, however, is used, or when the frequency of the current is very high, such a connection is impracticable on account of the loss which follows. In such cases, therefore, I obtain the beneficial results of an earth connection while preventing the generally serious loss that would occur in the use of such currents, by providing between the sheath and the ground a path P of very high ohmic resistance or one containing a self-induction coil S properly determined with respect to the existing conditions so that it will effect the described result, or a condenser of very small capacity as shown at R. In such cases the sheathing or screen for practical purposes may be regarded as isolated from the ground, since by the character of the connection employed no appreciable loss results from the passage of current from the sheath to the ground.

No particular plan of construction need be followed in making up this conductor, and no special materials of the several kinds named need be used; the general construction and character of the conductor, apart from the particular features herein described, being entirely well understood by those skilled in the art.

1. A conductor for electrical circuits, composed of a wire for carrying the current, an insulated coating or covering and a surrounding conducting sheath or screen divided into insulated sections, as set forth.

2. A conductor for electrical circuits, composed of a wire for carrying the current, a coating or covering of insulating material and a surrounding conducting sheath or screen divided into insulated sections, the ends of which overlap, as set forth.

3. The combination of a wire or conductor for conveying electric currents, an insulated coating or covering therefore, a conducting sheath or screen surrounding the insulating coating and a connection between said sheathing and the ground containing a condenser of very small capacity or its equivalent. 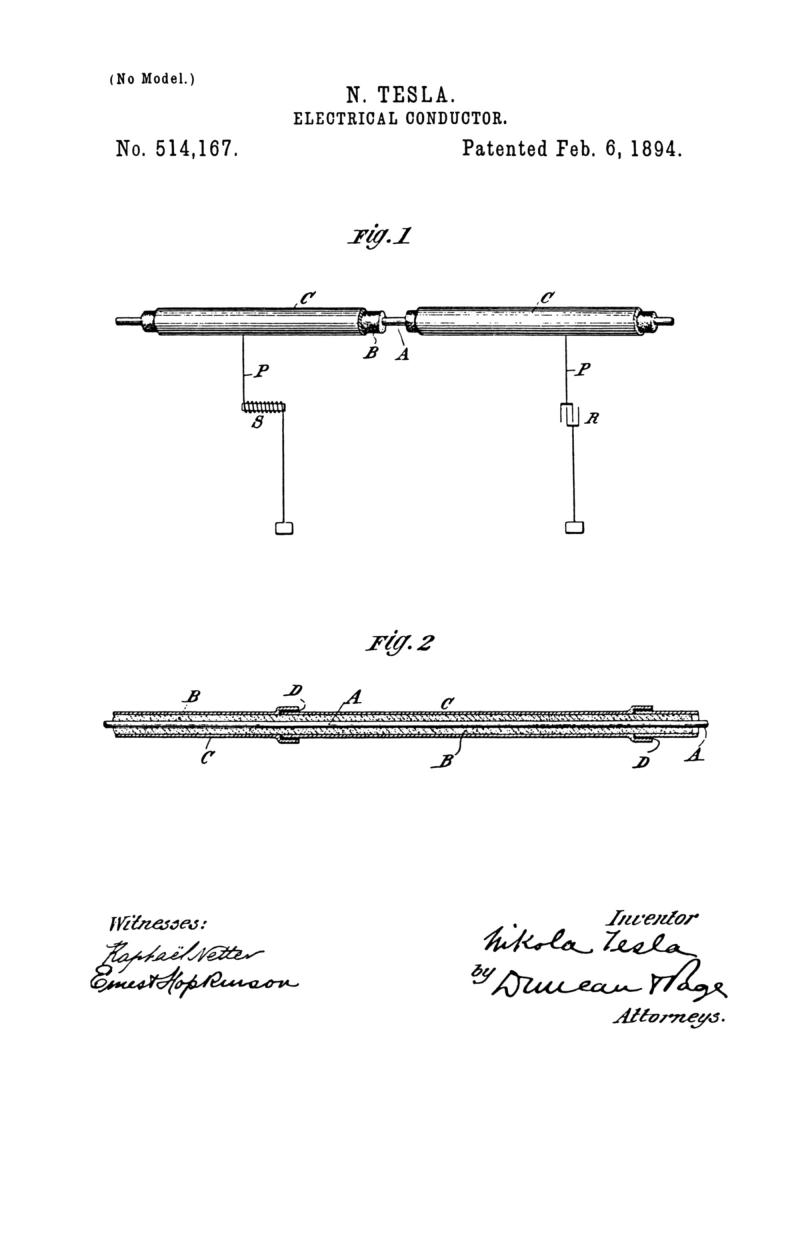