Be it known that I, NIKOLA TESLA, a citizen of the United States, residing at New York, in the county and State of New York, have invented certain new and useful Improvements in Coils for Electro-Magnets and other Apparatus, of which the following is a specification, reference being had to the drawings accompanying and forming a part of the same.

In electric apparatus or systems in which alternating currents are employed the self-induction of the coils or conductors may, and, in fact, in many cases does operate disadvantageously by giving rise to false currents which often reduce what is known as the commercial efficiency of the apparatus composing the system or operate detrimentally in other respects. The effects of self-induction, above referred to, are known to be neutralized by proportioning to a proper degree the capacity of the circuit with relation to the self-induction and frequency of the currents. This has been accomplished heretofore by the use of condensers constructed and applied as separate instruments.

My present invention has for its object to avoid the employment of condensers which are expensive, cumbersome and difficult to maintain in perfect condition, and to so construct the coils themselves as to accomplish the same ultimate object.

I would here state that by the term coils I desire to include generally helices, solenoids, or, in fact, any conductor the different parts of which by the requirements of its application or use are brought into such relations with each other as to materially increase the self-induction.

In order to attain my object and to properly increase the capacity of any given coil, I wind it in such way as to secure a greater difference of potential between its adjacent turns or convolutions, and since the energy stored in the coil—considering the latter as a condenser, is proportionate to the square of the potential difference between its adjacent convolutions, it is evident that I may in this way secure by a proper disposition of these convolutions a greatly increased capacity for a given increase in potential difference between the turns.

I have illustrated diagrammatically in the accompanying drawings the general nature of the plan which I adopt for carrying out this invention.

Let A, Fig. 1, designate any given coil the spires or convolutions of which are wound upon and insulated from each other. Let it be assumed that the terminals of this coil show a potential difference of one hundred volts, and that there are one thousand convolutions; then considering any two contiguous points on adjacent convolutions let it be assumed that there will exist between them a potential difference of one-tenth of a volt. If now, as shown in Fig. 2, a conductor B be wound parallel with the conductor A and insulated from it, and the end of A be connected with the starting point of B, the aggregate length of the two conductors being such that the assumed number of convolutions or turns is the same, viz., one thousand, then the potential difference between any two adjacent points in A and B will be fifty volts, and as the capacity effect is proportionate to the square of this difference, the energy stored in the coil as a whole will now be two hundred and fifty thousand as great. Following out this principle, I may wind any given coil either in whole or in part, not only in the specific manner herein illustrated, but in a great variety of ways, well-known in the art, so as to secure between adjacent convolutions such potential difference as will give the proper capacity to neutralize the self-induction for any given current that may be employed. Capacity secured in this particular way possesses an additional advantage in that it is evenly distributed, a consideration of the greatest importance in many cases, and the results, both as to efficiency and economy, are the more readily and easily obtained as the size of the coils, the potential difference, or frequency of the currents are increased.

Coils composed of independent strands or conductors wound side by side and connected in series are not in themselves new, and I do not regard a more detailed description of the same necessary. But heretofore, so far as I am aware, the objects in view have been essentially different from mine, and the results which I obtain even if an incident to such forms of winding have not been appreciated or taken advantage of.

In carrying out my invention it is to be observed that certain facts are well understood by those skilled in the art, viz.: the relations of capacity, self-induction, and the frequency and potential difference of the current. What capacity, therefore, in any given case it is desirable to obtain and what special winding will secure it, are readily determinable from the other factors which are known.

1. A coil for electric apparatus the adjacent convolutions of which form parts of the circuit between which there exists a potential difference sufficient to secure in the coil a capacity capable of neutralizing its self-induction, as hereinbefore described.

2. A coil composed of contiguous or adjacent insulated conductors electrically connected in series and having a potential difference of such value as to give to the coil as a whole, a capacity sufficient to neutralize its self-induction, as set forth. 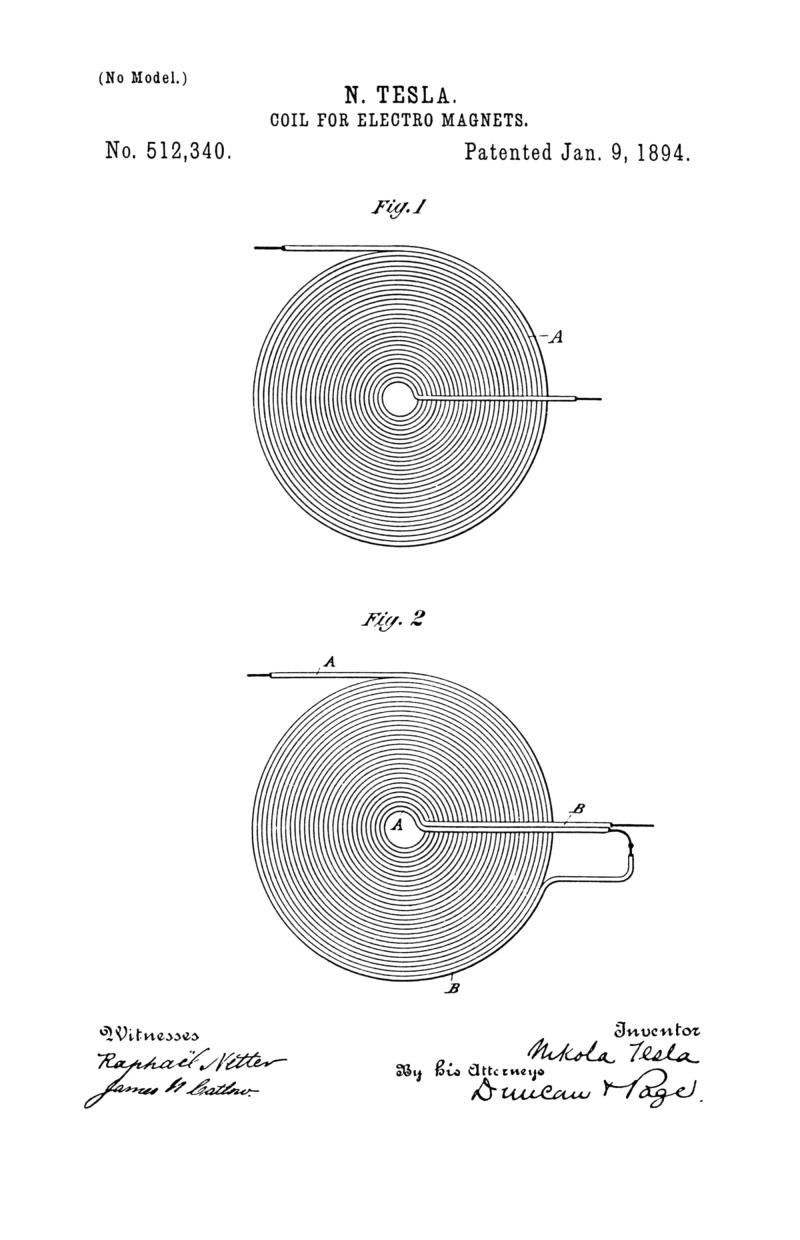