Be it known that I, NIKOLA TESLA, a citizen of the United States, residing at New York, in the county and State of New York, have invented certain new and useful Improvements in Means for Generating Electric Currents, of which the following is a specification, reference being had to the drawings accompanying and forming a part of the same.

The invention, subject of my present application, is an improvement applicable more especially to the method or system of generating and utilizing electrical energy, heretofore discovered by me, and more fully set forth in Letters Patent No. 454,622, of June 23, 1891, and No. 462,418, of November 3, 1891, and which involves the maintenance of an intermittent or oscillatory discharge of a condenser or circuit of suitable capacity into a working circuit containing translating devices. In systems of this character when the high frequency of the currents employed is due to the action of a disruptive or intermittent discharge across an air gap or break at some point of the circuit, I have found it to be of advantage not only to break up or destroy the least tendency to continuity of the arc or discharge, but also to control the period of the re-establishment of the same, and from investigations made by me with this object in view I have found that greatly improved results are secured by causing the discharge to take place in and through an insulating liquid, such as oil, and instead of allowing the terminal points of the break to remain at a uniform distance from each other, to vary such distance by bringing them periodically in actual contact or sufficiently near to establish the discharge and then separating them, or what is the equivalent of this, throwing in and out of the gap or break a conducting bridge at predetermined intervals. To obtain the best results, moreover, I find it essential to maintain at the point of discharge a flow of the insulating medium, or, in general, such a circulation of the same as will constantly operate to cut off or brake up the discharge as fast as it is established. The accomplishment of this latter result involves the employment of some mechanism for maintaining the flow or circulation of the insulating medium past the points of discharge, and I take advantage of the presence of such mechanism to accomplish a further and beneficial result which is the maintenance of a flow or circulation of the insulating liquid in which I immerse the converter coils used for raising the potential of the current, and also the condenser plates when such are required and used. By this means the insulating liquid surrounding the said coils and plates may be prevented from heating, either by its circulation alone or by the application to it while in motion of a cooling medium, and its requisite qualities preserved for an in definite time.

Broadly considered the plan contemplated is entirely independent of the special means for carrying it into execution, but in illustration of the preferred manner in which the invention is or may be carried out, I now refer to the drawings which are hereto annexed.

Figure 1 is a diagram of the system and devices employed by me. Fig. 2 is a sectional view of a detail of mechanism.

G represents an electrical generator, as for instance, an ordinary alternator, in the circuit of which is the primary P of a transformer, of which S represents the secondary, which is usually of much longer and finer wire than the primary. To the secondary circuit, if it have not of itself sufficient capacity for the purpose herein contemplated, are connected the plates of a condenser C, and at any point in said circuit is a break or gap at which occurs the disruptive discharge. In a portion of the secondary circuit, preferably in series with the condenser, as shown in the drawings, is a primary coil P' with which is associated a secondary S', which later constitutes the ultimate source of currents for a working circuit D in which or with which are connected translating devices E. Under the conditions assumed it will be understood that by the oscillation or change caused by the action of the discharge, the condenser is charged and discharged setting up in the primary P' an electrical disturbance of enormous frequency, as has been explained in my patent referred to, and as is now well understood. Instead of employing two terminals at a fixed distance, however, for the gap across which the discharge takes place, I vary the distance between them, or what is practically the same thing, I interpose between said terminals a conductor or a series of conductors successively by means of which the effective distance or length of the path of discharge is or may be varied at will. This I accomplish in the following manner:

A is a pipe or tube that leads into a tank B. To the end of this tube is secured an extension F of insulating material and the two terminals G' G' are caused to project through the sides of the same, as indicated in Fig. 2. Within the extension I secure two cross-bars H which afford bearings for the spindle of a small metallic turbine I, the blades of which, as the turbine revolves, bridge the space between the two terminals, nearly or quite touching the terminals in their movement. If now the tank B be filled with oil and the latter is drawn off or permitted to flow off through the tube A, the turbine will be rotated by the flow, the rate of rotation being dependent upon the rate of flow. By this means the arc or discharge is periodically established through a flow of oil, which secures in the most satisfactory manner the conditions best adapted for practical results.

The further objects of the invention are secured by placing the transformer P' S' in the body of oil in the tank B, and the condenser in a closed receptacle L. Then in order to maintain a circulation of the oil and to provide for the requisite flow which rotates the turbine, I connect the tank B with the condenser box L by means of the pipe A. I also run a pipe M from the box L to a small rotary pump N, and another pipe O from the latter back to the tank B.

When necessary or desirable I may insert in the pipe O a coil R, which is contained in a jacket T through which a cooling medium is passed.

The flow of oil is regulated by the speed at which the pump N is driven, and by this means the period of re-establishment of the arc is controlled.

Having now described my invention and the best means of which I am aware in which the same is or may be carried into effect, what I claim is—

1. In an electric system of the kind described, the combination with the points or terminals between which occurs the intermittent or oscillating discharge of means for maintaining between said points and in the path of the discharge of a flow of insulating liquid, as set forth.

2. In an electrical system of the kind described, the combination with a transformer, and the points or terminals between which occurs the intermittent or oscillating discharge, of a body of insulating liquid surrounding the same, and means for maintaining a flow or circulation of the same, as set forth.

3. In an electrical system of the kind described, the combination with a transformer and the points or terminals between which occurs the intermittent or oscillating discharge, of receptacles enclosing the same and containing oil and means for maintaining a flow of oil through said receptacles and around the devices therein, as set forth.

4. In an electrical system of the kind described, the combination with the points or terminals between which occurs the intermittent or oscillating discharge, of a means for maintaining a flow of insulating liquid between the discharge points, and means for varying the length of the path of discharge through such fluid, dependent for operation upon the flow of the same, as set forth.

5. The combination with discharge points immersed in oil, of means for periodically varying the length of the path of discharge between them, as described.

6. The combination with discharge points immersed in oil, of a conductor adapted to periodically bridge the space between such points, as set forth.

7. The combination with discharge points immersed in oil, means for causing a flow of the oil between said points and a metallic turbine mounted between the points and adapted by the rotation produced by the flowing oil to bridge with its vanes or blades the space between the said points. 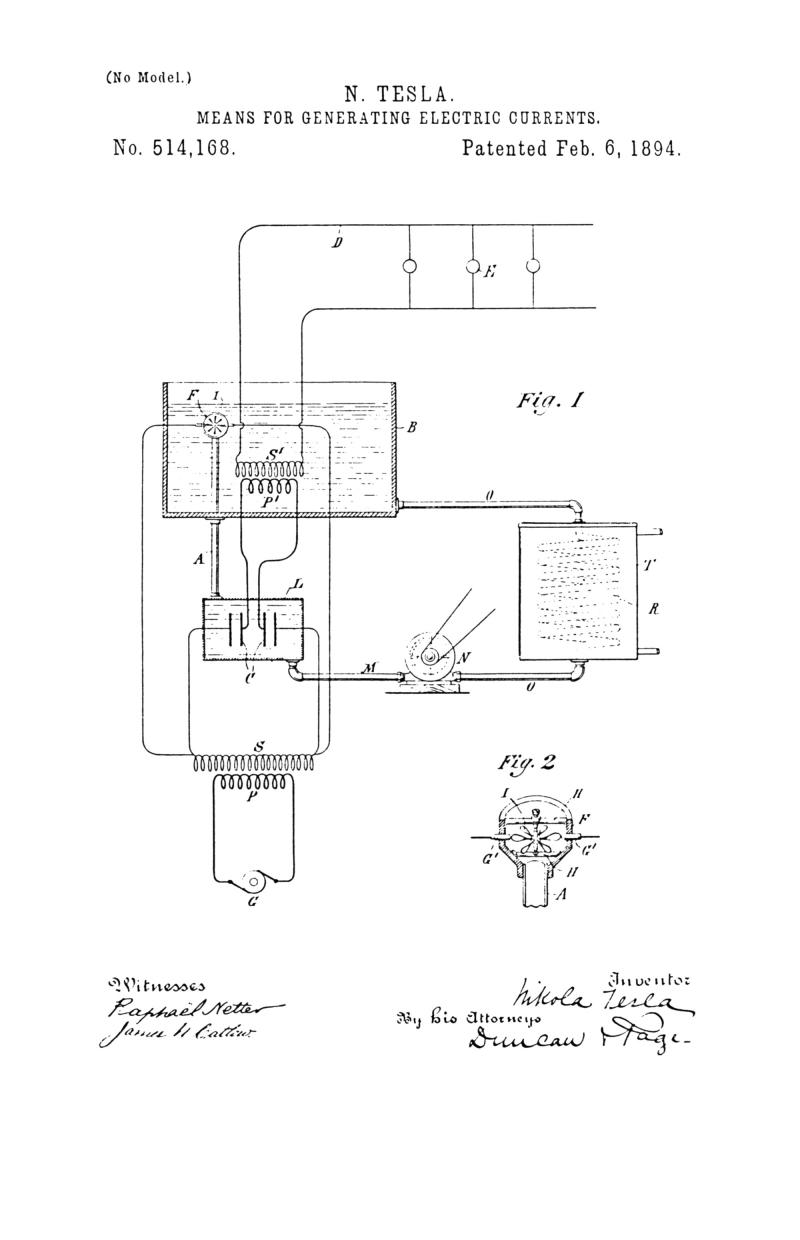