Be it known that I, NIKOLA TESLA, a citizen of the United States, residing at New York, in the county and State of New York, have invented a certain new and useful Improvement in Incandescent Electric Lamps, of which the following is a specification, reference being had to the drawings accompanying and forming a part of the same.

This invention is an improvement in the particular class of electric lamps or lighting devices invented by me and for which I have heretofore obtained Letters Patent, notably No. 454,622, dated June 23, 1891.

The invention applies more particularly to that form of lamp in which a small body or button of refractory material is supported by a conductor entering a very highly exhausted globe or receiver, but is also applicable generally to other forms of lamp adapted for use with similar systems in which currents of very high potential and great frequency are employed. I have found in the practical applications of this system that a considerable dissipation of energy takes place from the conductors conveying the currents of great potential and frequency, even when such conductors are thoroughly insulated both within and without the lamp globes, and the subject of my present invention is a means for preventing such dissipation within the lamp, or rather for confining it to the particular parts or part of the conductor which is designed to give light. This object I find I may readily accomplish by surrounding the leading-in and supporting conductors with a conductor which acts as a static screen. By this means the light-giving body or button which lies beyond the influence of the screen is quickly and efficiently brought to and maintained at higher incandescence by a suitable electrical current or effect, by reason of the fact that the electrical action to which the incandescence is due is confined mainly to the button.

A description of the ordinary form of lamp which I employ will serve to illustrate the principle and nature of this improvement, and for such description I now refer to the drawings which show such lamp in central vertical section.

A is a glass globe of the usual form, in the base of which is sealed a very thin conducting wire B, passing up through a stem of glass or other refractory insulator C. To the upper or inner end of this wire is united, as by means of a mass of carbon paste D, a carbon or other refractory stem E, that supports or carries a small button of carbon or other suitable substance F. Over the stem C is passed, at any convenient stage in the manufacture of the lamp and in any well understood way, a metallic tube G. I prefer to use for this purpose a very thin cylinder or tube of aluminum and it should entirely surround all parts of the conductor within the globe except the button itself, extending to or nearly up to the point of union of the stem E with the button F. Such a device by reason of its electrostatic action reduces the loss of energy supplied to that bulb, preventing its radiation or dissipation into space except through the exposed or unprotected button. The tube or screen G is entirely insulated from the conductors within the globe and from all external conductors or bodies. The globe, by means of a suitable air pump, is exhausted to as high a degree as practicable, or until a non-striking vacuum in attained. It is connected with the pump by the usual tube which in sealed off at K.

The lamp may be made in different forms and in different ways, and the invention, as may be readily understood from its above described nature and purpose, is not confined to the specific form of lamp herein shown.

1. In an incandescent electric lamp, the combination of an exhausted globe, a refractory light-giving body therein, a conductor leading into the globe and connected to or supporting the said body, and a conducting screen surrounding the said conductor, as set forth.

2. In an incandescent electric lamp, the combination of an exhausted globe, a refractory light-giving body or button therein, a conducting support for said button within the globe, and a metallic tube surrounding or enclosing the said conductor up to the point of union with the button, as set forth.

3. In an incandescent electric lamp, the combination of an exhausted globe, a wire sealed therein, and coated with or embedded in a glass stem, a carbon stem united with the wire, a refractory conductor mounted on said stem, and a conducting tube or cylinder surrounding the wire and carbon stem, as and for the purpose set forth. 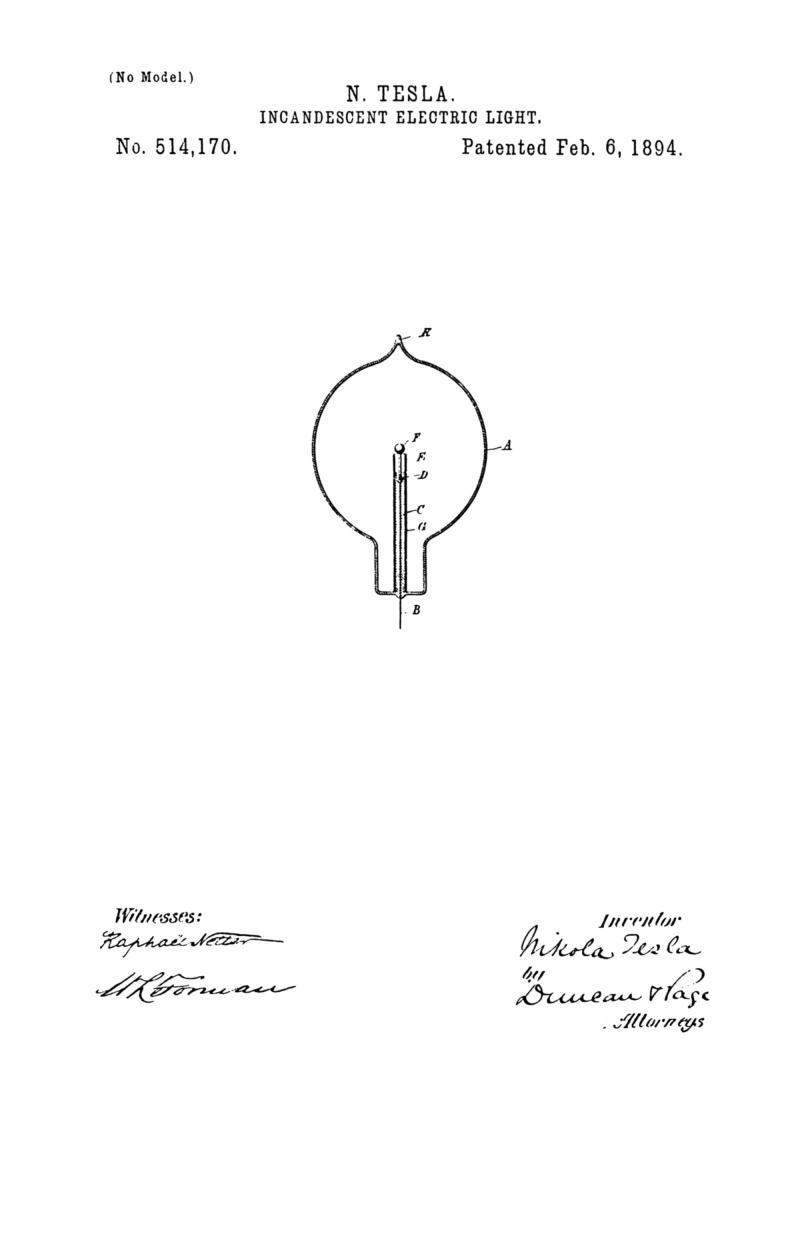